A 6:20am wake up call and we got the van ready (i.e., just disconnected the camp site power cable and closed all the cupboards) and headed down to the lakefront as at 7am it was the official ‘Swim The Course’ event - where competitors get a chance to swim the official course. As we arrived at the beach there were tons of other swimmers ready in their wetsuits. It was just like race day.

The weather has fine with some cloud but the strong winds we had last night had made the lake quite choppy. When I say ‘lake’ it really is quite a large lake - its New Zealand’s 4th largest lake (192 km2), 45.5km long and 311 metres deep. We were told that the water temperature was 16 degrees celcius so this convinced me to put my new neoprene swim cap on.

It’s a two lap course (each lap about 1.9km) and my plan was to swim a single lap. The last time I swum was a few days before Christmas so lets just say that my swim training hasn’t been that great! I won’t keep trying to think of excuses. I just need to get on with it. Once I’m out of the water on race day I’ll be happy to just get onto the bike. Then I can start to enjoy myself! 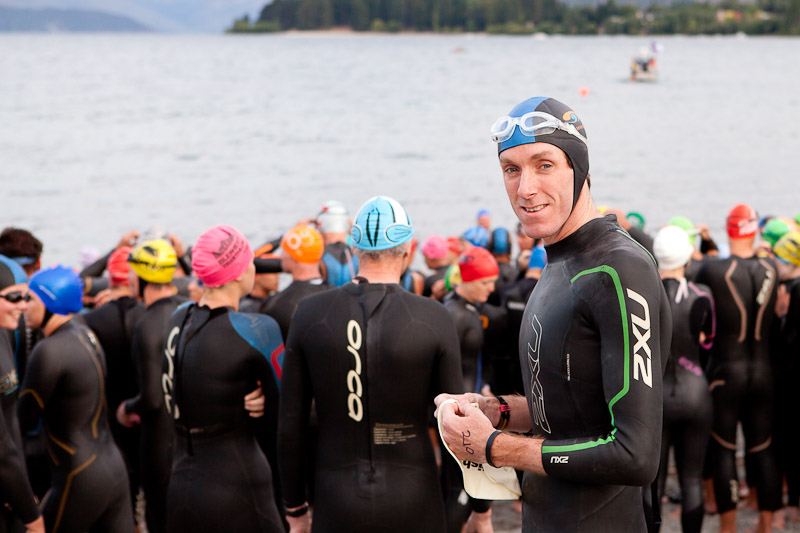 I got into my wetsuit - which I last wore at the Vitruvian Triathlon in 2010 (yes, about 16 months ago) and it still fits just fine. It’s not the perfect racing wetsuit (it’s a bottom of the range 2XU suit that cost 100 pounds new a few years ago but its good enough for now) and after registering (so they could check that the same number of swimmers getting into the lake got out later!) headed to the briefing close to the waters edge.

After the briefing we headed to the water and set off at our own pace towards the first turn buoy - about 625 metres offshore.

It was bloody horrible. There was a lot of chop in the water and it was hard to get used to the cold water. On the plus side the visibility was great and the water was lovely to drink! I really didn’t enjoy the swim to the first marker buoy.

Once we reached the buoy and swam side on to the waves it got a lot better. I was in a much happier place, it wasn’t too busy and from here I just got on with it. Round the next couple of turn buoys and then I headed back in towards the beach.

I got to the beach in a little under 35 minutes which I considering the conditions I was quite happy with. If the weather is the same on race day I’d hope to complete the swim in around 1 hour 10 and anything quicker would be a big bonus. A lovely calm lake is what I’d love to be greeted by on Saturday but sods law means a storm will come over the lake on Friday night just to make things tough!

After getting out my wetsuit I had time to relax over breakfast. Sharon then headed off to volunteer at the main race HQ area whilst I started this blog entry and will shortly head out on my bike to check out another part of the course, before stopping in to see Sharon.

After the crazy amounts of driving we’ve done over the past week it is lovely to just kick back and try and relax a little as we head towards the weekend.

Late afternoon update - I rode another 20 miles of the course and it’s all looking good - I believe I rode up one of the steeper climbs as well and it wasn’t too bad either. I think a lot of how Saturday pans out will be due to the weather, which right now is looking like it might be fairly alright.