One week until London... Marathon Preparation

On Sunday 22nd April 2012 I will be running the London Marathon for the second time. This will be my third ‘standalone’ marathon. When I say ‘standalone’ I mean that I have run other marathons, but as part of Ironman distance triathlons (i.e., after a 2.4 mile swim and 112 mile bike ride!). Here’s how I’ve fared over the different races…

Now, I’ve already run a marathon this year (in late January) which hopefully means I’ve got some good endurance in me. Returning back from holiday in mid February I had to sort out a plan of attack to get me to the London Marathon well trained and ready to get myself a good finishing time. From talking to people and thinking about this myself I should be capable of a time close to or under three hours but I plan to aim for a time that will get me a guaranteed entry into London for the next two years - which is under 3 hours 10 minutes.

I’ve decided to spend the last few weeks concentrating primarily on my running (I’ll deal with the swimming and cycling after the marathon as I’m not doing an Ironman triathlon until, er, July! Eek!) and decided to follow a training programme in the lead up to the race. Although training plans are normally based on longer timescales (often 12, 18 or 24 weeks) I picked up a schedule from one of the many running books we have at home and decided to follow the final six or seven weeks to give me some strict focus.

Well, a week out from ‘London’ I think I’ve followed it really well. I’ve done more speedwork/interval sessions. My slow runs have been slower and my hard runs harder - which is something that it seems that many people rarely do (and I’ve not done in the past) - they normally just end up running most of their sessions at a similar pace to the others.

Ignoring the Ironman marathons I wanted to see how my weekly mileage compares across my standalone marathons (2009 London, 2011 Brighton, 2012 London) so here’s a little chart showing the milage completed each week in the run up to the race. For this year as we head into race week I’ve put my projected (scheduled) mileage down as a dashed line. 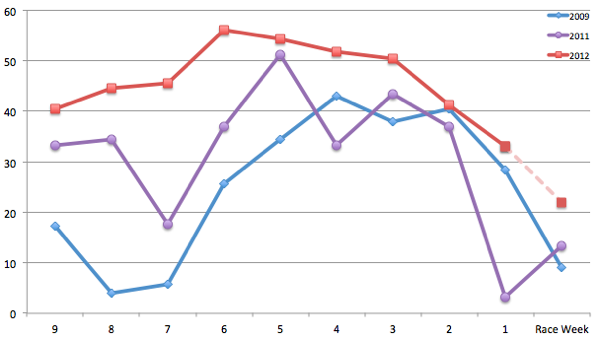 It’s clear that my training this time around has been consistent and high - the past few weeks have been the most consistent that I think I’ve ever run so that all has to bode well next Sunday. Looking at the erratic dips in the graphs, in 2009 I had some ITB pain in my left leg a couple of months out. In 2011 the main problem was two weeks out from the Brighton Marathon when I was ill for a few days and just didn’t run at all. Come race day I struggled much more than I should have and lost fifteen minutes in the second half of the race.

I’ll probably post another blog at the end of the week after I collect my race number but right now I’m feeling positive and really looking forward to running the London Marathon next weekend.