I’ve been working on and off for the same company in London for around eight years now and many times I’ve heard of this annual corporate race for London based companies. You cannot enter the event individually, only as part of a corporate team. A few months ago I signed up for the race and as the UK sweltered in a heatwave race day (or evening) loomed.

It’s a 5.6k (3.5 mile) race in Londons Battersea Park. It is run mostly on tarmac roads but with some (very firm) grass sections and a few speedbumps and sharp corners to keep up the interest!

The team I was in was racing on Thursday (there was another race the previous day) and starts at 6:45pm. Both days had over 13,000 people running - yes, you read that right, 13,000 runners. The largest team was Deloitte, with 1000 runners! With this many people It felt like the London Marathon, but only over 3.5 miles! 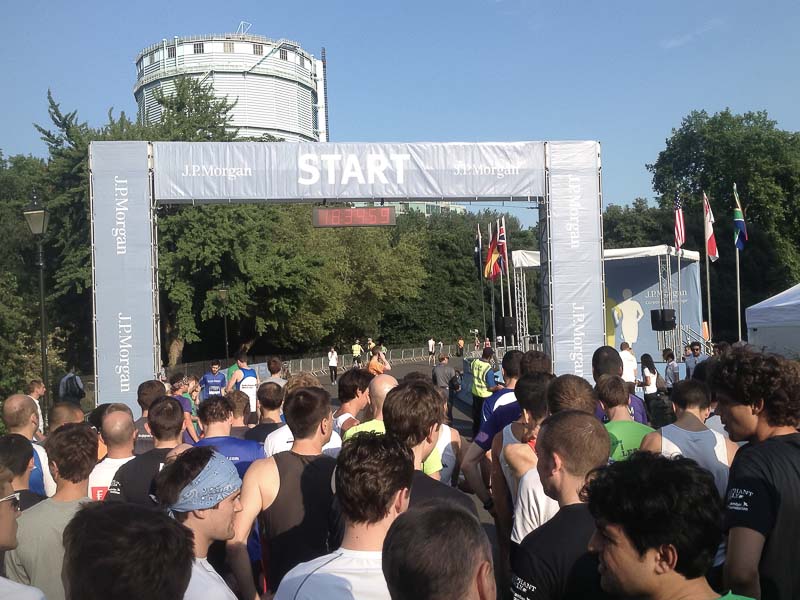 10 minutes before the start and it’s getting crowded

As the starting gun went I knew it would be fast, and oh it was fast. I was fully expecting many runners to blow up early on and this was true, but there were many a fast runner out on the course tonight.

After the first mile the crowdedness calmed right down and although still fairly busy there was plenty of room to move around if necessary. My ‘lovely’ 100% cotton company t-shirt was keeping me lovely and warm (!!!) and I really pushed hard for the duration.

Running through the 5k mark in about 18:15 was good to see and I just had to keep up a similar effort for the last 600m. My pace did drop slightly (well, my first mile was my fastest and I slowed ever so slightly each mile thereafter) but I just about hung on and finished in 20:36 - which I was very happy with.

Shortly after crossing the line I met up with a couple of the others from our team and we headed off for some food that was laid on for the runners - a burger, banana with a Red Stripe beer chaser! Perfect recovery.

I’ve no idea of my position on the night as the results for both Wednesday and Thursday evening races are combined but overall I finished 182nd out of over 26,000 runners. Well inside of the top one percent. That’ll do nicely.

It was a really slick event and even with the huge number of runners in my view it worked really well. Which is more than can be said for my navigation skills on the 10 mile bike ride home!