A few months ago I remember seeing a post over at tri247.com about the Worthing Triathlon doing a special deal to celebrate 10 years of the event. Worthing is less than 15 miles away from my parents house and £40 for a standard/olympic distance triathlon sounded ideal. I’d never taken part in a olympic distance triathlon before (1500m swim, 40k bike, 10k run) so it was a bit of a no-brainer to enter (I’ve only ever taken part in shorter and much longer races). As it turned out, because of a sneaky trip to Lanzarote in late April I did my first olympic distance race there, so I knew what I’d be up against this time!

4:15am on Sunday morning and I was up having breakfast in advance of the 6:35am ‘veterans’ swim start! (women at 6:30am, ‘men’ at 6:39, and me in the middle!). Sharon and I drove over to the start to be greeted with beautiful weather, a very calm sea and hardly any wind. Perfect. 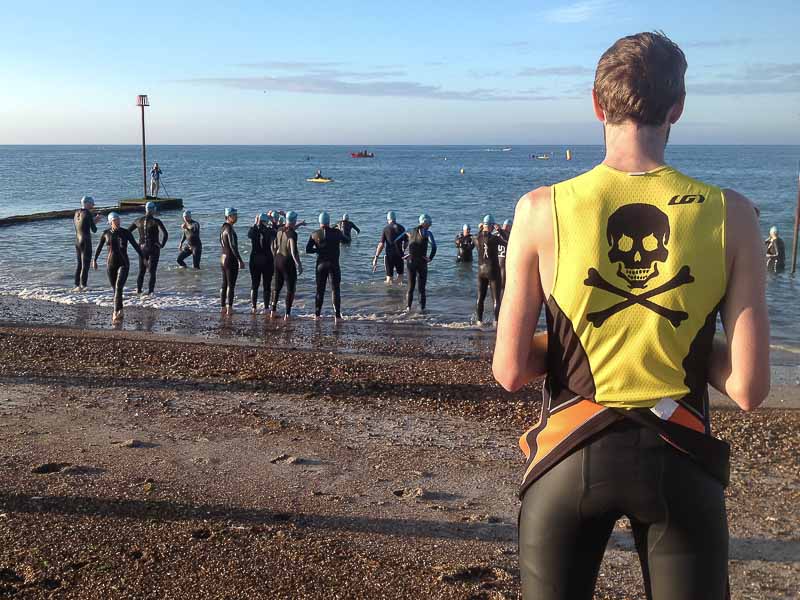 I got the bike ready, slipped (squeezed) into my wetsuit and then listened to the pre-race briefing. We all then headed onto the beach where I had a bit of a warm up. I know I keep saying that I never swim enough and this was no exception - work has been hectic recently and after coming off of my bike nearly two weeks ago I couldn’t go near a swimming pool with my ‘road rash.’ This could be interesting. 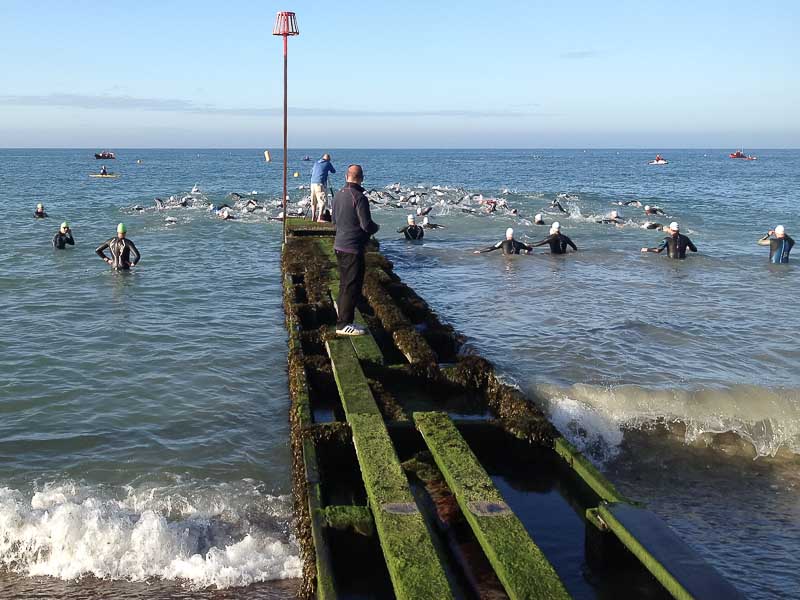 The start of the veterans ‘wave’ (40 year olds and over) 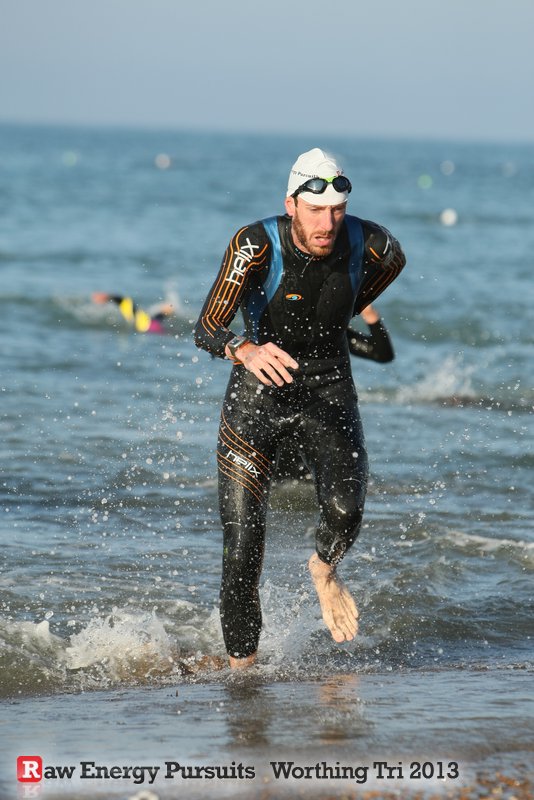 After an uneventful swim I ran up the beach into transition the timing mat beeped which gave me a swim time of 23:29 (30th place). T1 wasn’t overly fast as I 1) put socks on and 2) put my bike shoes on as I don’t do any ‘flying mount’ stuff when getting onto the bike! Anyway, after a 1:27 transition (57th fastest on the day) I was off on the bike. 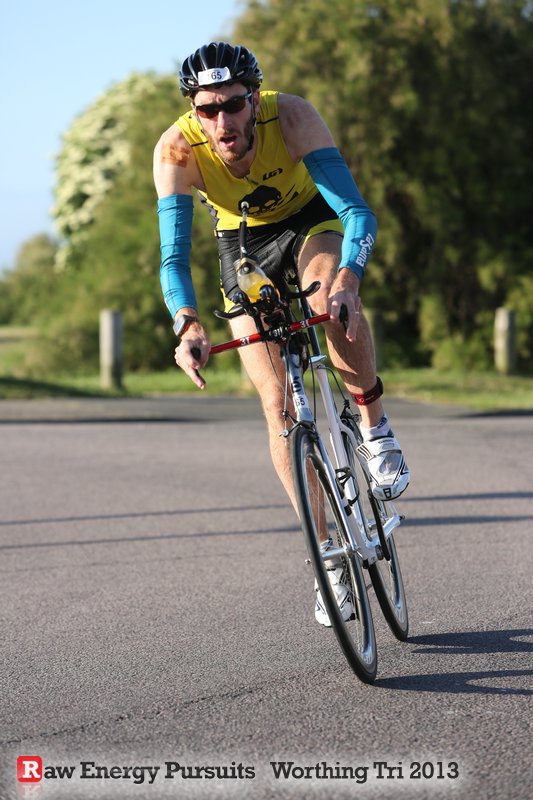 Early on in the bike segment. Note the plaster on my right shoulder following my recent bike fall!

For the first couple of miles or so I overtook quite a few people and then found myself with lots of space ahead of me. I pretty much knew the course and from here on in I just put my head down, got myself as aerodynamic as I could and mashed the pedals!

Nobody overtook me during the bike leg. After 25 and a quarter miles of riding I headed back into transition 2 ready for the run. My bike split was 1 hour 6 minutes and 19 seconds. This was the 9th fastest bike split of the day. I averaged around 23 miles per hour which wasn’t bad considering some of the bad road surfaces and speed humps near the start/end of the bike route. For the power geeks out there my data from the ride can be found here at TrainingPeaks.

Transition 2 took me 44 seconds and was the 39th quickest of the day. The fastest transition was 26 seconds. 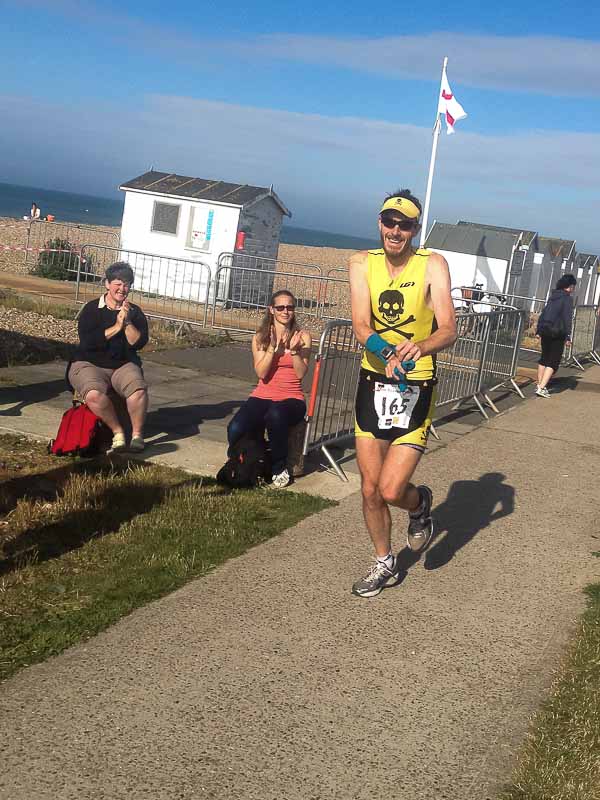 At the start of the run, ditching my arm warmers that I wore on the bike.

After a slightly lumpy bike route it was time for a pancake flat run - up and down the promenade. Although it was only 8am the sun was up and it was warm. After racing off a little too quickly I got myself back under control and settled into what I wanted to be a 40 minute 10k pace. At about 2.9 miles I saw Sharon at one of the run turnaround points. I got plenty of encouragement - I couldn’t say much in return as I was working rather hard! I was overtaken by one chap during the run - he was a young-un who was in the later start wave nearly five minutes after me and was absolutely flying.

Before long (but oh long enough!) I found myself running into the finish. I pushed all the way to the end and crossed the line with a run time of 37:56. This was the 13th fastest run split. My GPS watch ‘measured’ the run at 5.9 miles, so not quite the 6.2 that a 10k would be. Either way, everyone ran the same course and I managed to keep my pace consistent and was pretty much bang on 40 minute 10k pace. I was happy with that.

After a post race sausage sandwich washed down with a can of coke Sharon and I awaited the prize giving. My results gave me a finishing time of 2:09:57 and I was 9th overall and 3rd V40. Typically the prizes for the V40, V50, V60 categories were only for 1st and 2nd. However… the overall race winner (a rather speedy chap indeed) was a V40 so he took the overall honours and the V40 prizes roll down. I didn’t realise this until my name was read out as 2nd in my category! Brilliant. My first ever prize at a triathlon race. I was pretty close at the Thames Turbo Triathlon a few weeks ago and now I got something - and a lovely little etched glass award. 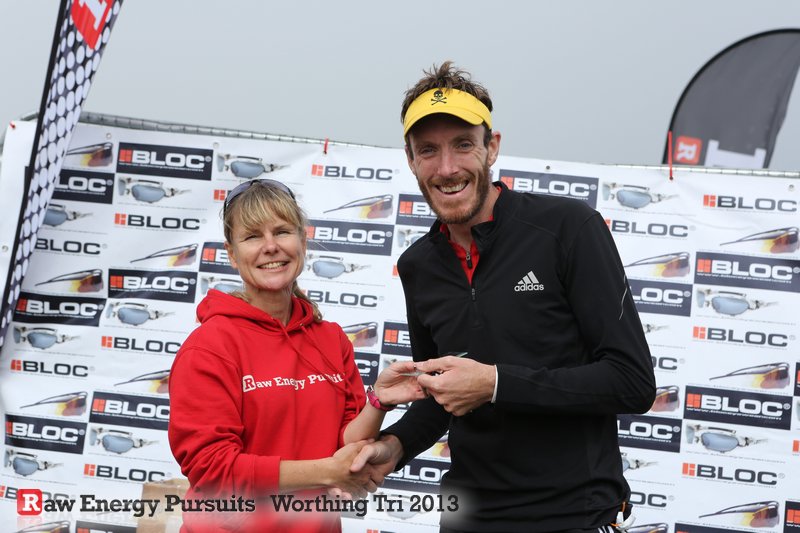 This race is put on by a company called Raw Energy Pursuits. I’ve not done of their events before but I wouldn’t hesitate at all in entering another one. It had a really friendly community feel to it. It wasn’t a huge event and it seemed to have a lovely personal touch to it. Friendly staff all the way from race registration through to marshals and then the finish line crew. Highly recommended.

You’ll also notice that some of the photos above say “Raw Energy Pursuits Worthing Tri 2013” at the bottom. This is because part of the entry fee goes towards providing free event photographs. Great work by the race organisers for doing this, and a fantastic job as ever by Sussex Sport Photography.