On 29 July 1981, there was a public holiday in England to mark the wedding day of Prince Charles and Diana, Princess of Wales. A running race was organised by the London Road Runners Club in Bushy Park, West London. Since this date, the race has been run every year on the last Friday in July (apart from a date change in 2012 because of the London Olympics).

This 7k race is a regular fixture in our calendar and 2013 is my fifth time taking part. I missed out in 2012 because of the date change (we were away that weekend) but normally I find myself on the start line at 7:30pm on the last Friday in July along with a number of friends ready to see if we can run as fast as a parkrun 5k and then hang on for the final 2k!

Coming off of the back of a time of 18:08 for the previous weeks Crane parkrun I felt I had some good speed in the legs and the main thing that would hold me back would be tiredness. Earlier in the day I’d done a (very easy) run to and from the local pool and then just under 4km of swimming (you’d have never guessed I was doing an Ironman again soon!). About an hour before the start my legs just felt heavy and tired. Perhaps the evening warmth and friendly racing would bring them to life…

Sharon and I arrived at the race early to collect our race numbers and enjoy the early evening atmosphere. Hampton Hill Cricket Club, where the race HQ is based, was looking fantastic after its recent rebuild. We caught up with quite a few friends who were taking part and then headed to the start.

A small group of us ‘Ranelaghs’ started close together and had a little banter before the start. The atmosphere was great. Weather-wise, it was warm (around 25-26 degrees) with a light breeze.

The start was the usual mad rush to get off of the grass area and onto firmer ground without tripping over! I planned to run ‘steady’ this evening. However, after about 1km or so I heard this voice behind me say:

It was Duncan M., a clubmate who I’ve run this race with before and has fallen foul to some over-enthusiastic pacing at this race. My response was something like “this just adds to the excitement” or something similar. 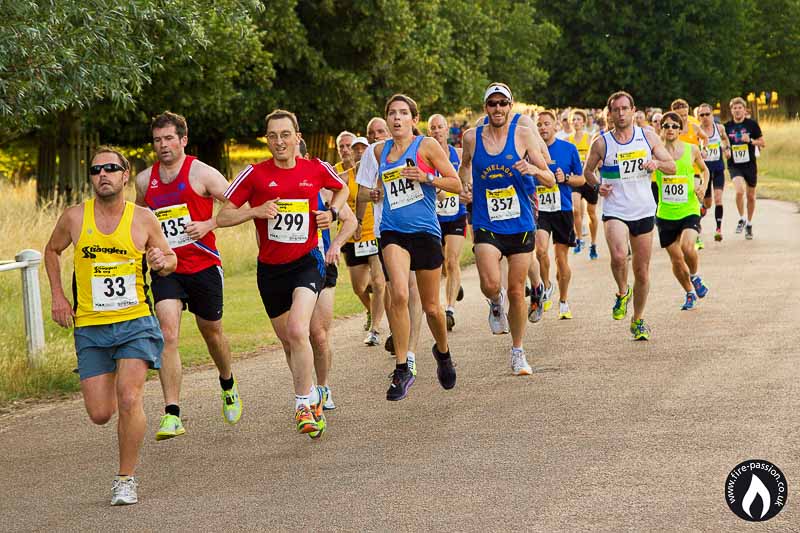 After about 2.5k a young lady (Georgie R.) ran past and I tried to jump on the back of her. Not literally I must add - I wanted to get right behind and use her to help pacing (and drafting!). She was tall, fast and running really well. We ran together and pushed each other on for about 3km. It really helped me stay on pace. We were slowly reeling in runners up ahead and it was good to see Evan and Simon from Stragglers - both on great form as we ran on the grass beside Chestnut Avenue.

As I knew many of them I got tons of support from the marshals on course. It was lovely. I tried my best to thank them or lift an arm to signal thanks of some sort!

Heading alongside the Woodland Gardens at about 4.5k we caught up with Peter F. from Ranelagh. I told him to ‘stick with us’ - which he did (not for long though mind!). I went through 5k in just over 18 minutes so I knew the final 2k would be tough. The young lady I was trying to run with made a gap just before 6k and I couldn’t close it down. The ‘elastic’ had snapped. 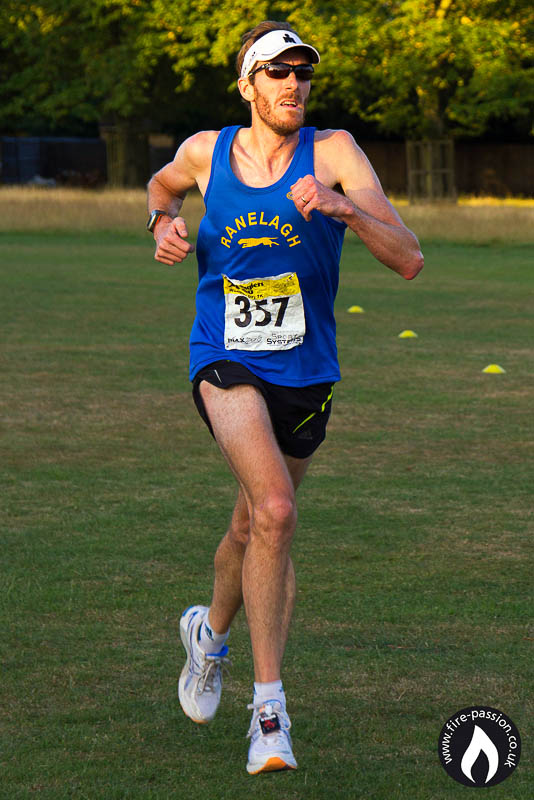 From here to the finish it was just a case of getting there as quickly as possible. Rounding the last ‘bend’ before the final 600m or so there was loads of support which really helped. I ran back onto the grass, pushed hard, got overtaken by someone pushing harder (damn!) and ‘raced’ through the finish to get a time of 26:07 and 17th overall. This is both a one second PB at the race and my best finishing position. I also finished 3rd in the V40 category. My mile average pace splits (it measured 4.4 miles) according to my GPS were 5:45, 5:55, 5:52, 5:59 and 5:54 - pretty consistent there. Looking at my stats at my running club website for local league road races this was my best ever performance running for the club. I’m still not that quick, but I’m not too shabby either!

After attempting to rehydrate with water at the finish I waited for Sharon to finish. We put our lovely new finishers t-shirts on and chose to rehydrate back at the cricket club with something a little stronger than water and a picnic that we’d prepared earlier.

What a lovely evening.