We were shattered last night. Sharon was asleep by 8:30pm and I was gone by 9pm. Slept through until 6:45am. I was not happy with myself as I missed the sunrise. Well, you don’t actually see the sun coming over the horizon because of the hills in the way but normally I’m sat on the lanai in the dark as night turns into day!

After the morning cuppa we headed to the pier and I went for a swim - this time in the new swimskin that I bought a few weeks ago. This is a bit like a one-piece triathlon suit but used just for the swim portion of the race. Part of its product description is…

What this probably means is that if I have a wee whilst swimming it won’t go anywhere! But I might be 10 seconds faster over 2.4 miles because of it. Jackpot! (or should I say crackpot). 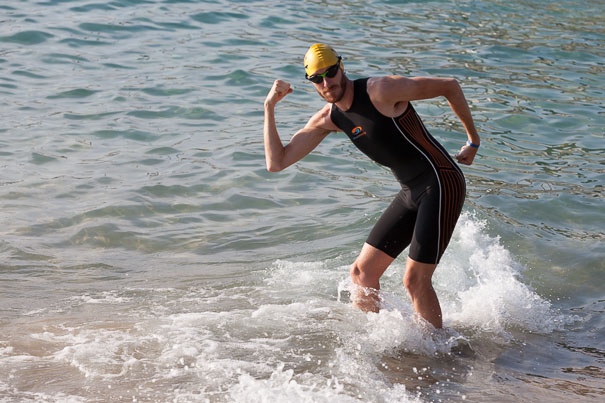 It’s all about psyching out the opposition at the beach in Kona. Surely a ‘Brucie’ pose would do the trick…

There’s some seriously buff bodies (male and female) appearing at the beach each morning. This swimskin does wonders to hide my pasty pale upper body and hide the fact that the only six pack I own is in the fridge at home. 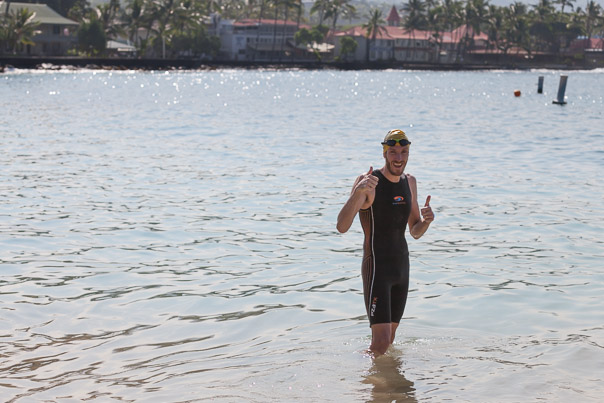 I swam the 1.2 mile ‘loop’ twice (so that’s another 2.4 mile ‘full distance’ swim done - I don’t think I’ve ever swum so much in training for a race before). Wearing the swimskin pre-race is a good thing so I can get used to where it rubs. I put some ‘bodyglide’ (it’s a bit like vaseline) on most places around my arms and shoulders but just missed a spot by my neck which got a little sore. The (really really) salty water doesn’t help much at all here.

Back home for breakfast and then I decided that a little bike ride was in order (I’m probably going to do a longish ride on Sunday) so I thought I’d head out to just past the airport and back. It’s a 20 mile ride and today was pretty breezy (and hot). It felt like the windy ride I did a week ago. Good to see the winds back, and also good that I was only doing a short ride!

Looking on twitter later in the day it must have been breezy if the last years female winner posts the following tweet: 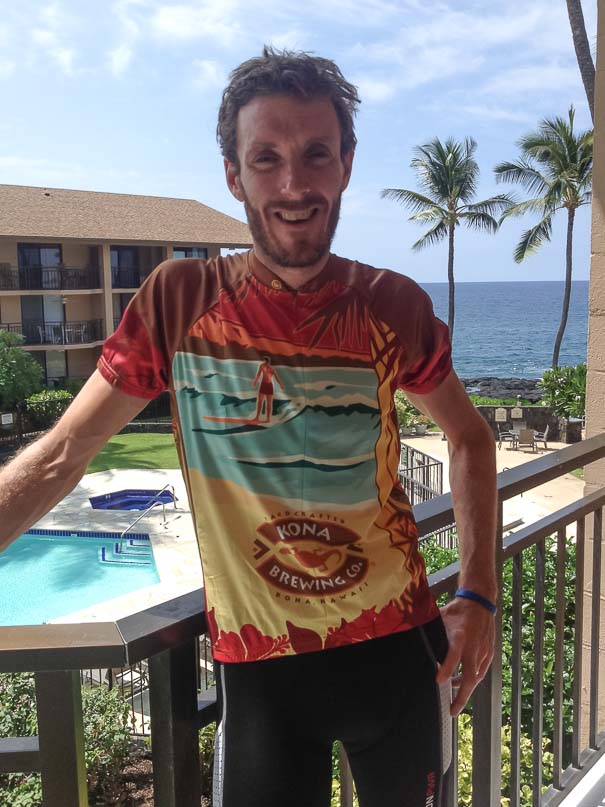 There was a good bit of banter on Twitter from some of the pro-women commenting about the conditions out there today. It’s really fun to see that day in day out the best Ironman triathletes in the world are riding the same roads that you are.

I’d planned on doing a run at some point today and on the way back from the ride decided that I’d like to get it over and done with sooner rather than later. So, at 12:45 I stepped out of the door into the oven that was Ali’i Drive. Today I think is probably the hottest day I’ve had since getting here 10 days ago.

In order to look the part I went for the topless running look but with obligatory triathletes visor! Such a shame there’s no photos of me. Such a pity. Such a pity. Instead here’s a photograph of my new Kona Brewing Company cycle jersey - oh, and is the view from our lanai acceptable?

I ran just over three miles down to Kahaluu Beach - which is a really popular snorkelling and surfing spot. It was so so hot. Looking at the weather observation reports from Kona Airport the ‘heat index’ (i.e., what the temperature feels like taking into account humidity) was between 88 and 90 degrees during this run. It felt more like about 200 to me! When I got to the beach I stopped my watch and walked for about four or five minutes. I found one of the open air freshwater showers that they have at the beaches, turned it on and gave my head a good watering! Visor back on and then it was the run back home.

Ali’i drive is such a nice road to run on. There’s plenty of distractions - nice houses, beaches, surfers etc. and it gently undulates. A fair bit of the marathon in two weeks time is on this road so I’m looking forward to this. As for the part of the run out on the hot exposed highway - I think I’m less looking forward to that!

I got back home, 48 minutes of running and about 6.3 miles. My longest run since mid August and I came back with my dodgy left foot still in one piece. My pace was quicker than my expected race pace (a lot quicker!) and I’m getting more and more confident with every run that I’ll be able to get round the run course in one piece. Remember… I just need to GET THAT MEDAL on 12 October.

All my training I log using the TrainingPeaks website and you can see in the below screenshot what I thought of the run (in my ‘Post-activity comments’)! 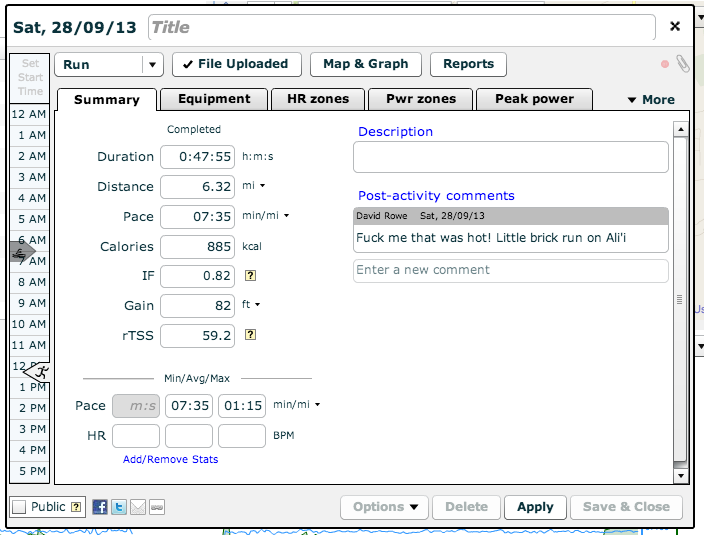 Back home, dripping in sweat I had a huge glass of squash with a massive fruit smoothie chaser. Bliss.

With a swim, a bike and a run today I’d call that a mini triathlon. Close to three hours of training will do nicely.

A dip in the pool (where we got chatting to a guy who works at a local tattoo shop on Ali’i Drive - the answer is ‘no’ by the way) was followed by a bit of time writing this entry as I won’t be doing it later as Sharon and I are off out to dinner.