5:30am. It was dark, I knew I had a big day planned so I thought I’d enjoy a slow start to the day before things got a little faster. The days normally start with a Skype call to Sharon where the first thing she says is “why are you up so early?”

First things first I noticed that this weeks episode of the (awesome) IMTalk podcast (all about Ironman racing and presented by a couple of Kiwis) had me, yes me, featured as their ‘Age Grouper Of The Week’ (or perhaps in the eyes of some of my friends - ‘EliteAgeGrouper Of The Week’!) Sharon had nominated me a few weeks ago after Ironman UK and they picked me for this weeks show. I’ve had a couple of mentions on the show before (one when we were in New Zealand in 2012 and I sent them a photo of me wearing an IMTalk cycling top). I really enjoy their podcast. The banter between the presenters often makes me laugh out loud on long runs.

Anyway… moving on. I had a listen to my ‘feature’ on this weeks show (about 37 minutes in) and then had some breakfast. No swimming for me today as my shoulders could feel that I’d been swimming more than usual recently! The plan for today was to get on the bike at a similar time to race day and then ride the whole course (well, not the ‘loop’ bits in town but the main route of the course to the north of the island and back). 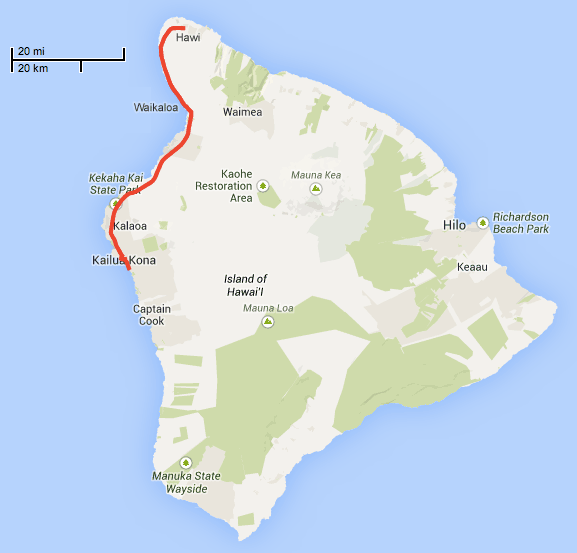 The route from Kona to Hawi - just under 55 miles

About 8:15am I set off to the highway and up to Kawaihae (36 miles). As I hit the Queen K (the first big highway) I caught up with the chap (Dave) I rode with for a few miles the other day. We chatted a bit for about 10-15 minutes - I told him I was going to the town of Hawi and he gave me loads of pointers about what to expect. Lovely chap.

At Kawaihae I stopped, got a couple of bottle refills and then continued in the direction of Hawi, which is 18 miles away. This is the description of the bike course from the Ironman website:

As cyclists make their way north along the Queen Ka’ahumanu Highway, from Kailua-Kona to the turnaround in Hawi, they can be exposed to intense trade winds that buffet much of the exposed western and northern coast of the Big Island. The winds vary in intensity from steady to heavy blasts that can blow cyclists across the road. For this reason, disc wheels are not permitted. Winds may subside during the gradual climb to Hawi but pick up again as athletes make their way to T2.

Conditions were pretty good today. The temperature was (only) in the mid-high 80’s. The wind was fairly light during the first half of the ride. Heading up to Hawi was lovely. It’s a bit ‘rolling’ at first and then there’s more of a steady climb. Nothing too steep at all. As I made it to the top of the island there were some moderate strong trade-winds coming in. It was breezy but nowhere near as bad as on Fridays ride. I think I was just fairly lucky today. Yes, I was getting blown around the road a bit but I was expecting much much worse.

Just over an hour later I arrived at Hawi. It’s a small town, a few quaint shops, one with a hammock outside and during the Ironman race slap-bang in the middle of the road is the turnaround point for the bike segment. I turned round, took a few photos, attempted to record a ‘selfie’ video on my phone (stay tuned for hopefully some videos at some point) and then rode the 18 miles back to Kawaihae.

I stopped again at the gas station for a couple more bottle refills before heading back to Kona. Only another 37.5 miles to go! By now there was a bit of a headwind all the way back. I pushed harder during this segment and the only thing that really tired me out was just being ‘down’ on the aero bars on the bike so much today. From what I’ve experienced so far there really is pretty much no reason to not be ‘aero’ for most of the race. The only thing stopping me was wanting to stretch my back out a bit every now and then.

Overall I drank just under six litres of sports drink during this ride (there’s an absolute bargain on Powerade at a gas station I keep going to - 2 litres or there abouts for $2.45). I went there twice today. Topped off with a handful of Clif Bars (oh they’re so so nice) and a few Strawberry/Banana Gu Gels this kept me going today.

110 miles on the bike and ignoring drink and a couple of photo stops it took 5 hours 33 of ‘pedalling’ time. That’ll do nicely for my longest ride since Ironman UK. I can start to taper now I guess! This is a great confidence booster after doing very little cycling between mid-August and arriving here last week.

I got back to the condo and decided that I’d go for a quick run (to make up for the ‘test’ run I skipped yesterday). I ran a mile down Ali’ Drive, stopped at the ocean for a little look at the waves crashing in, turned around and ran back. No additional foot pain which was great. I really do think I’m healing pretty well right now. I knew a bit of sunshine would help!

I made a nice fruit smoothie when I got back and found the biggest cup in the cupboard for it. I had two full cups of drink. Bloody lovely. I topped it off with a dip in the swimming pool and that was pretty much my day. 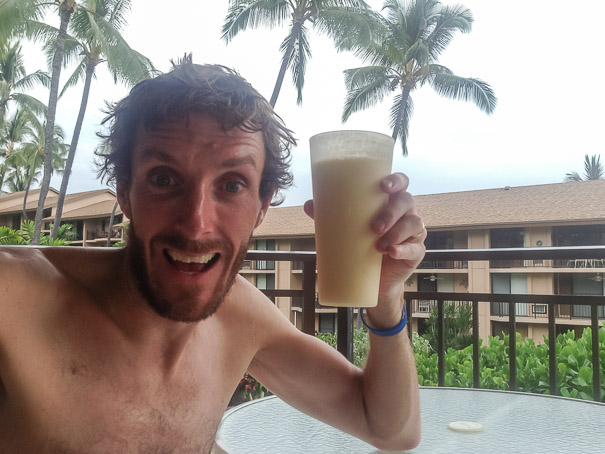