5:20am. Surely after a 6 hours+ of exercise yesterday I should be sleeping more? I guess I’m just too excited being here!!

I just want to take this opportunity to say thank you to everyone who’s reading these posts. I’ve had loads of messages both as comments on these posts and also general comments on Facebook/Twitter from people saying that they like their daily update. Thanks for popping by and having a read. Some of you I’ll see soon when you get here to race or support and some of you I’ll see back in England in a few weeks time - I’ll be the one grinning, hopefully wearing a finishers medal and no doubt head to toe in Ironman branded clothing! I’ll try and keep it interesting - probably with a bit of ‘touristy’ info soon so it’s not just 100 percent swim/bite/bike/run! 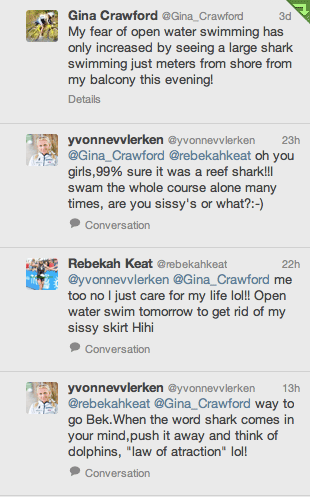 Looking back at posts on Twitter (I’ve created a public list of all Pro Athletes who qualified for Kona) there’s been a good bit of banter between some of the pro women regarding sharks in the ocean! I also decided to do a little search on Google and found this story from a few months ago. Hmn….

My legs feel pretty good today after yesterdays efforts which is great. What I need now is a little splash in the ocean being chased by sharks to loosen them up a bit more.

So, I was down at the pier for another swim at about 7:15am. I swum 1.2 miles today and took my GoPro camera out with me to see about getting a few photos. I’ll get more over the coming days and weeks and no doubt share my favourite ones here on the blog.

As I was treading water at the end of my swim I heard this ‘Hello David’ from behind me! What! It was the chap (also called David) that I keep bumping into - that’s twice whilst cycling and once swimming. He did tell me that Kona is a pretty small town - he wasn’t wrong there. We chatted about yesterdays ride to Hawi. 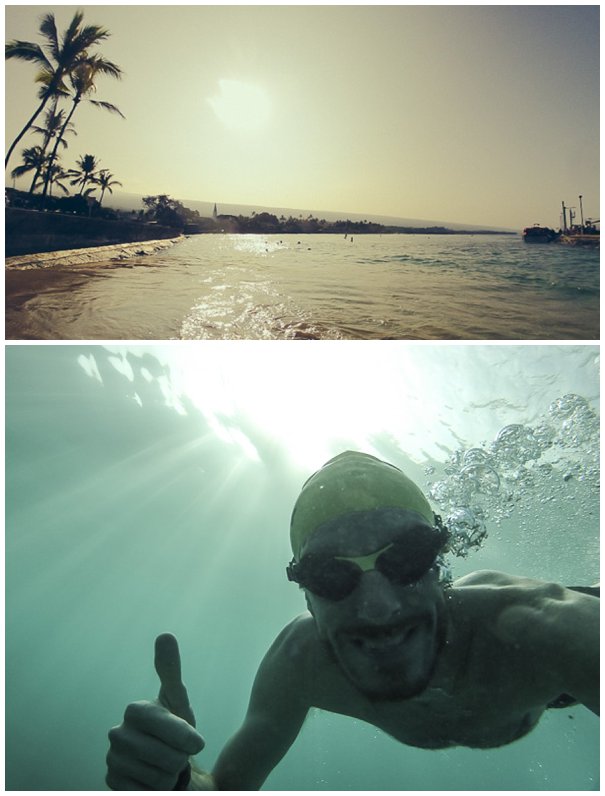 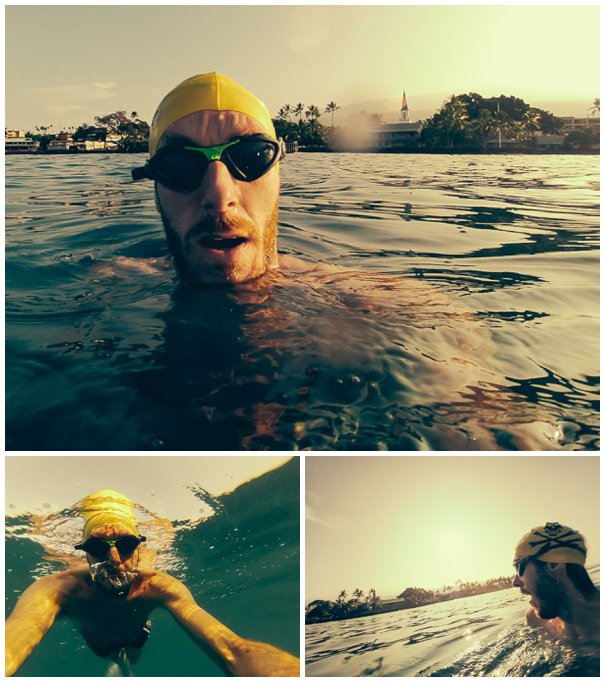 Back from the swim I had breakfast and then watched the final winner-take-all race of the Americas Cup sailing event. What a race. Those boats are amazing.

It was true scorcher here this morning and seeing as though my foot wasn’t giving me any (more) grief I decided to make the most of the midday sun and go for a run! There’s little point me going for a run at 6am as I won’t be running at that time on race day. I need to start to get used to the conditions that I’ll be racing in. Tuesday I did two miles, so I decided to make it four today. Thankfully exactly two miles away is a beautiful beach (the one that was closed because of the shark sighting the other day) so I stopped for a couple of minutes, saw quite a few people playing in the surf and then turned round and ran back to the condo. I stopped briefly at another beach where there were a handful of people out surfing and saw a bicycle, with what looked like a lawnmower engine and a small fuel tank on the top-tube! Never seen anything like that before.

Apart from being stupidly hot and drinking about 400ml of liquid it was lovely - I was running again. Provided my foot behaves itself I’ll probably another run probably on Friday - this time perhaps a little further.

Post lunch I strolled down the road to the hairdressers for a well overdue trim. Nothing outrageous, just a little bit off the top and sides! On that subject, you know hairdressers mostly have strange names - well, this one was called ‘Hawaiian Hairlines.’

Oh, and as I left the hairdressers the heavens opened. The rain was warm though so no complaints here - although I did see the following a little later… 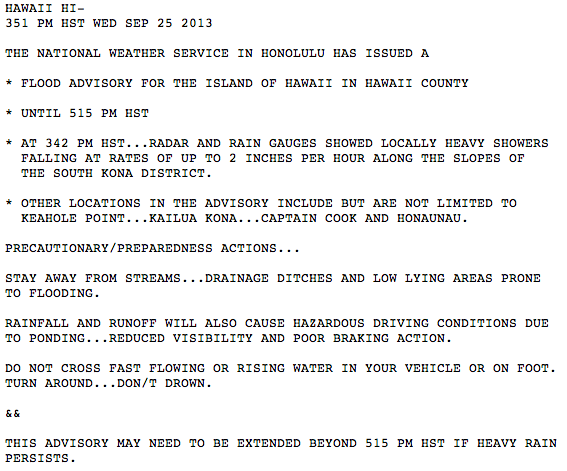 Flood Advisory Notice from the National Weather Service in Honolulu

The rain swamped the town for a good couple of hours and then cleared up, albeit leaving some huge puddles. As the rain cleared I jumped in the car to a bit of a cultural expedition! A few days ago whilst researching things to do I had seen that the Kona Historical Society was holding one of its monthly lectures in the super posh Council Chambers at the West Hawaii Civic Center, a few miles up the road from where I’m staying. This evenings talk was about the history of a Kona Coffee Farm and how the society have restored a farm to preserve the stories of Kona’s pioneers. The room was full with probably close to 100 people, it was really informative and I’ve learnt a lot more about the history behind my morning brew. I do like to learn a little about the places I visit and it was great to take advantage of this event that is put on for locals and visitors (although I suspect I was the only visitor!) alike. 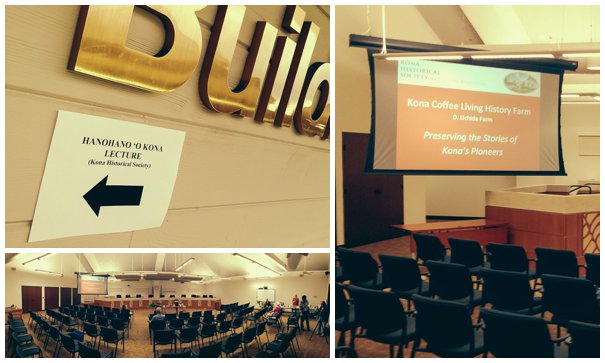