This morning was the second ‘race’ as part of Ironman week. The PATH (People’s Advocacy for Trails Hawaii) 5k and 10k running races. I’d not entered either of them but Sharon had entered the 5k. The race started just after 7:30am so we were up and out the condo by 6:40 to ensure we got there, registered and ready before the start.

There were loads of people milling around and getting ready for the race - there was a lovely atmosphere. I strolled up the road to sit on the wall by the ocean ready to watch the runners stream past a few minutes later.

It’s an out-and-back route and the 10k race started a few minutes before the 5k race. Conditions were typical I’d say (low 80’s temperature) and a fairly clear sky. Lovely for spectating - a bit warm for running.

Sharon had a pretty good run considering her lack of recent running and warm weather is not her friend when it comes to things like this! The best thing was a (lovely) medal and t-shirt for every finisher. 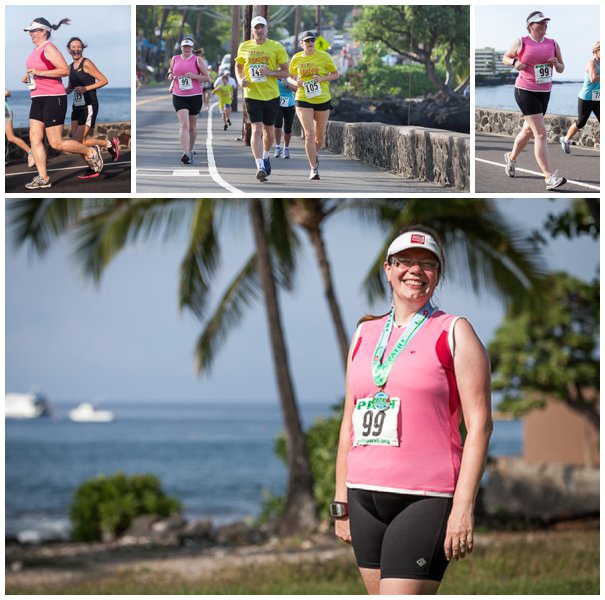 We were back ‘home’ by about 9:30am and after breakfast I headed out for a spin on the bike. There’s a few routes I’d been eyeing up lately (thanks to the great info at the Hawaii Cycling Club website) and the Hina Lani Street (aka the Costco Road) hill climb route sounded like a good hard workout but with a lovely descent back to sea level.

After heading onto the Queen K you turn right at Hina Lani Street and the climb begins proper. According to my GPS it was just 1,240 feet of climbing over 3.55 miles (an average of 6.6%). There was a tail-wind, meaning that there was no real air to breath (or attempt to cool you). It took just over 23 minutes to cover the three and a half miles. My average speed was just over nine miles per hour. At one point an automatic speed limit radar sign thingy proudly told the cars coming up behind me that I was cycling at 7mph! Thanks!

The profile of todays ride - over 15 miles

Reaching the top I stopped to take a couple of photos. That’s the only reason I stopped. Honest. Not because I was dripping in sweat and could hardly see. Or the fact that the hill was at its steepest right near the top. 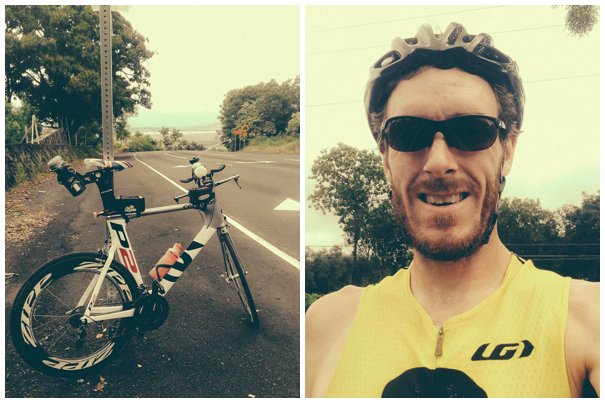 Well, after catching my breath I turned right onto Palani Road and headed all the way back into town. A four mile descent on the same road takes you right back to the pier in Kona and then an easy ride back home.

Another hour or so clocked up on the bike. Not very far (just over 15 miles) but a solid effort and a rather large hill to climb.

Post lunch we headed into town to have a look at the Ironman World Championship merchandise marquee (yes, it was huge!) and gave the credit card a bit of a battering. Obviously I cannot wear any of the purchases until after the race as that would bring me bad luck, or something!

I now have my race day nutrition sorted for the bike. I just need a bigger bottle holder!

On the way home we took a detour to the magic sands (aka ‘shark’) beach for a little swim. Back home for a dip in the jacuzzi and then we got ready to go out for dinner with the other two ‘pirates’ that qualified at Ironman UK in September. We ate shrimp. Lots of shrimp.