This morning we had planned to be down at the pier for a 7am swim and to meet up with Claire Shea-Simonds (a speedy lass who qualified at Lanzarote in May) and also with Matt Molloy, who was kindly hand delivering my Freespeed Kona Qualifier t-shirt. Freespeed are a company based in Chiswick, West London who specialise in bike fitting. You go there, they stick you on a strange sort of exercise bike - move the saddle, bars etc., do a load of clever video analysis and at the end they suggest what bicycle measurements work best for you. Over the past couple of years I’ve been in to seem them a few times and I rate them highly For UK Kona qualifiers they’ve printed special t-shirts with the words ‘Speed Freek’ printed on them as a play on words… anyway, before I jump the gun something else happened first thing this morning… 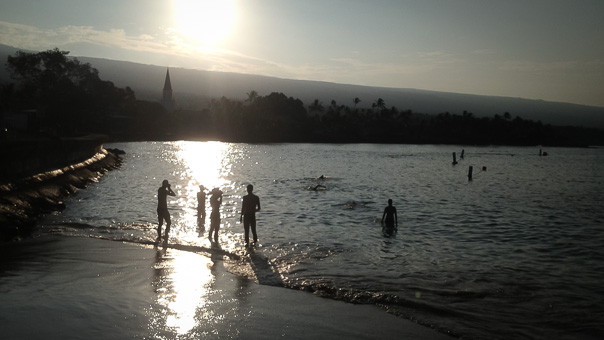 Sharon and I were sat on the lanai at about 6am having a drink and watching the day rise up over the mountains. Looking on twitter I saw a tweet saying that Jimmy Johnsen from Denmark would be down at the pier at 6:30am with some Funky Trunks to give away! Funky Trunks are like little speedo swimming trunks, but in funky colours. He mentioned on twitter that he had some pairs to give away a couple of days ago and I said at the time that I was interested. Well… as soon as I saw that he would be at the pier at 6:30 we hurried up our coffee, clothes on, teeth brushed and out of the door.

The pier/swim are was busy - even at 6:30am. We hung around and Jimmy and his fiancee arrived and were accosted by three other chaps. He opened his bag, emptied the smallest little sealed plastic bags onto the floor and said help yourselves! The sizes were either Extra Small or Small! WHAT!

About eight of us chaps who got some then headed off to the changing area on the pier - made ourselves look good (there wasn’t much time but we did our best!) and headed back to Aimee (Jimmy’s fiancee) who wanted to take photos of us all for the Funky Trunks people. I was assured that they weren’t for her personal collection…

We all had a giggle - we all breathed in - we all had our photos taken! Funky Trunks!!! 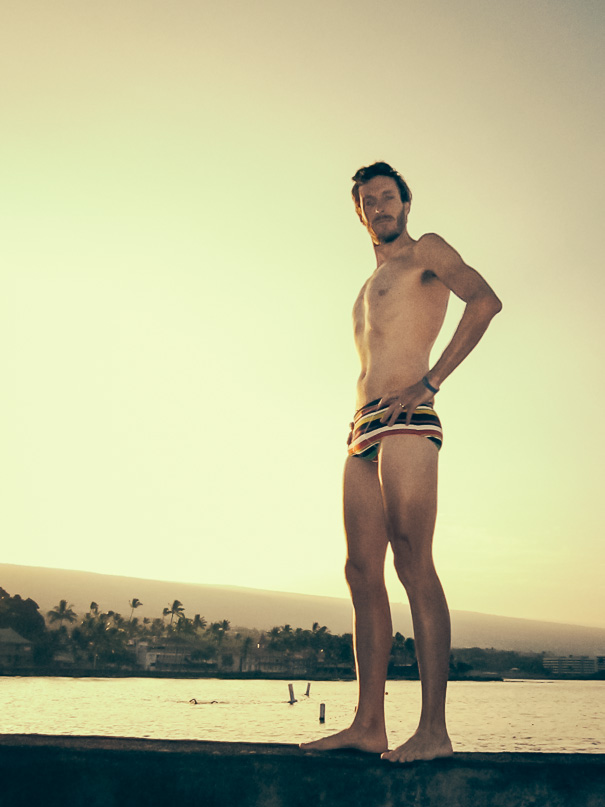 Ladies - please email me if you wish to purchase a strictly limited edition signed print of this image!!!

Just before 7am Claire arrived with her friend Katherine who’s here to support her (and keep her calm before the ‘big dance’ next Saturday) and a few minutes later Team Freespeed arrived. Matt gave me my super cool Speed Freek t-shirt which fitted perfectly. Time for a photo opportunity on the beach. I kinda liked the crop-top look with my new trunks. Declan from Freespeed gave me some abuse from the pier. Whatta you think….? 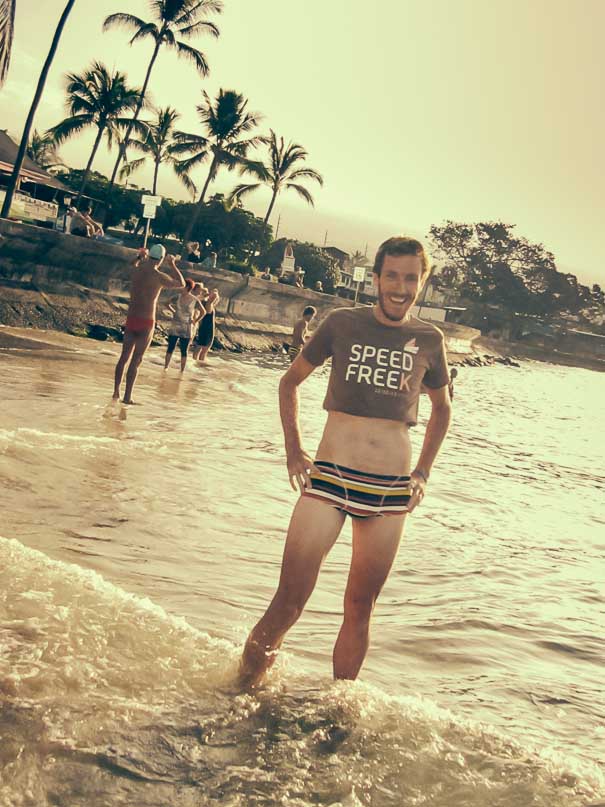 It was eventually time to go for a swim. I only wanted a short swim today as I’m doing a full distance swim tomorrow so headed out to the 1500m turn buoy (which is 750m out at sea). Whilst heading out there I could see that I was swimming close to and at a very similar speed to another chap. Next thing I knew he was right on my feet getting a mighty fine draft! He stuck with me for a couple of hundred metres I guess to the buoy. When I stopped, he stopped and then said ‘David?’ - haha, it was Martin Muldoon - a chap I met at breakfast before my long bike ride on Wednesday. Claire had also swum out and stopped, and then jumped on the Freespeed train that came flying past! Martin and I then swam back to shore. A good solid effort over 1500m this morning. Nice.

The pier/beach area is getting crazy busy. A week ago when Sharon arrived it was so so quiet. A week before that when I was here it was empty. Now the place is heaving. Next week it will be ridiculously busy! It was good to say hello to a few other people including Jon Heasman, who qualified at Ironman UK as well as myself. Always good to see a familiar face, and there’s plenty of them around at the moment. Nice to also finally meet Tamsin Lewis - a UK pro triathlete who’s not yet moved up to Ironman distance racing.

Another familiar face I saw was multiple Ironman World Champion Craig Alexander. I mentioned him in an earlier diary entry and I quickly got a photo with him. Either everyone on the pier is too cool to ask him for a photo or they didn’t recognise him! I suspect in many cases it is the latter. 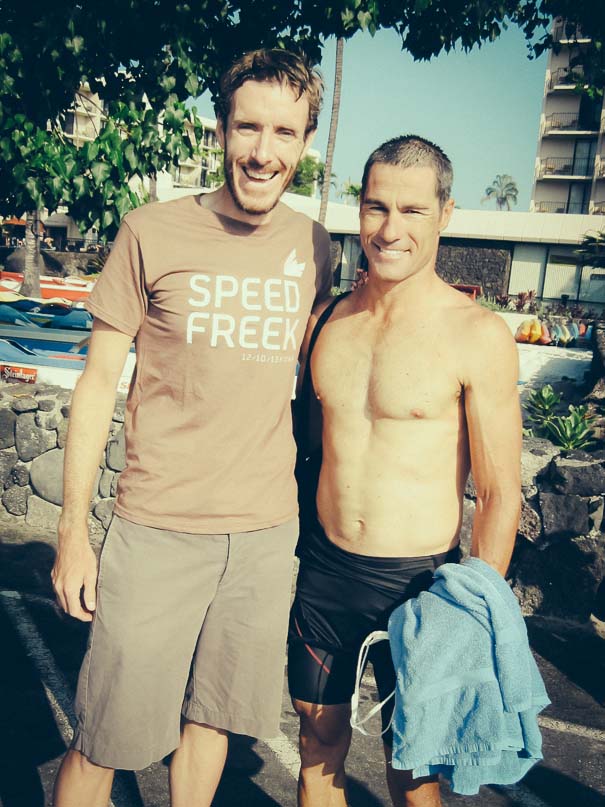 A few of us then headed off for coffee and breakfast at Lava Java and that was pretty much the morning! Phew.

My schedule for the rest of the day said…. oh that’s right - I don’t follow a schedule. Well.. I fancied a bit of a run.

After a bite to eat Sharon and I drove out to the Natural Energy Lab (or its full name - Hawaii Ocean Science & Technology Park - Administered by the Natural Energy Laboratory of Hawaii Authority). This is part of the run course and is the most remote part of the marathon. It’s hot, exposed and at a tough point during the race (around 16-19 miles in). Many people suggest running back from the Energy Lab to Kona to get a feel for the course, the potential conditions and to get your head around this part of the race. Sounded like a fine idea. Here’s a great little video at triathlete.com about this part of the course.

We headed off in the jeep down this part of the course and I also wanted to get a few photographs of me looking a little more serious! I put my race kit on (out came the pirate skull’n’crossbone triathlon top) and ran up and down the road for a bit. It was actually a great little warm-up. After about 20 minutes Sharon drove off into the distance leaving me with about 8.5 miles to run home. 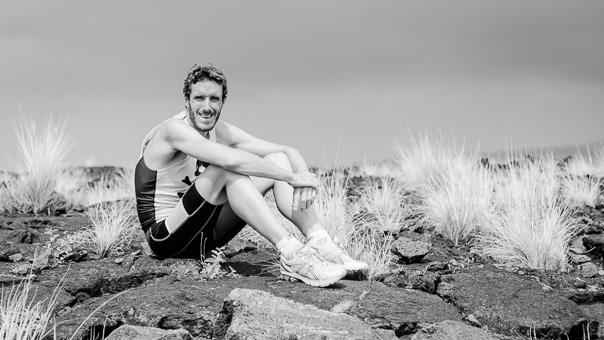 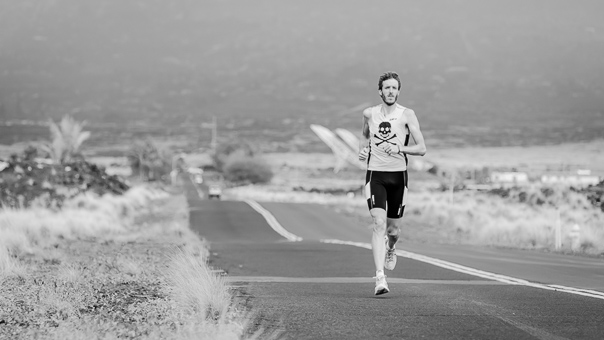 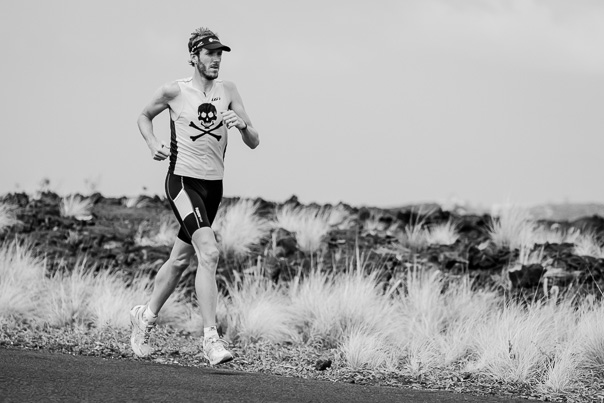 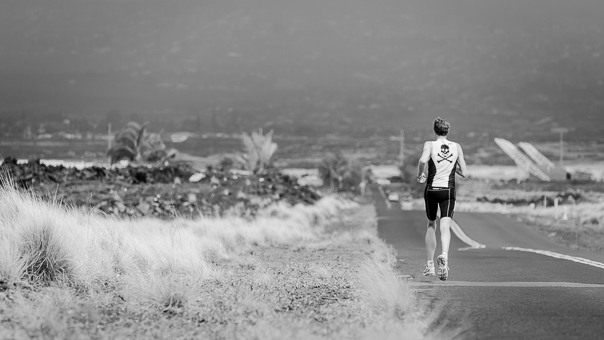 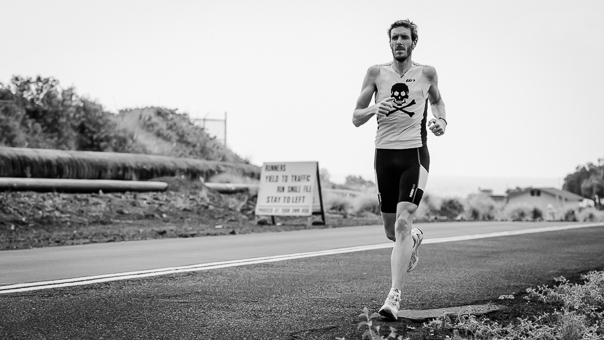 Well…. I had a lovely little run. It was mostly cloudy, there was a bit of a breeze coming off of the ocean and to be honest it didn’t feel hot at all. OK, so it was 83 degrees (but felt like 87) but it felt fine. My heart rate was nice and low and I was really enjoying it. No foot pain whatsoever during this run. 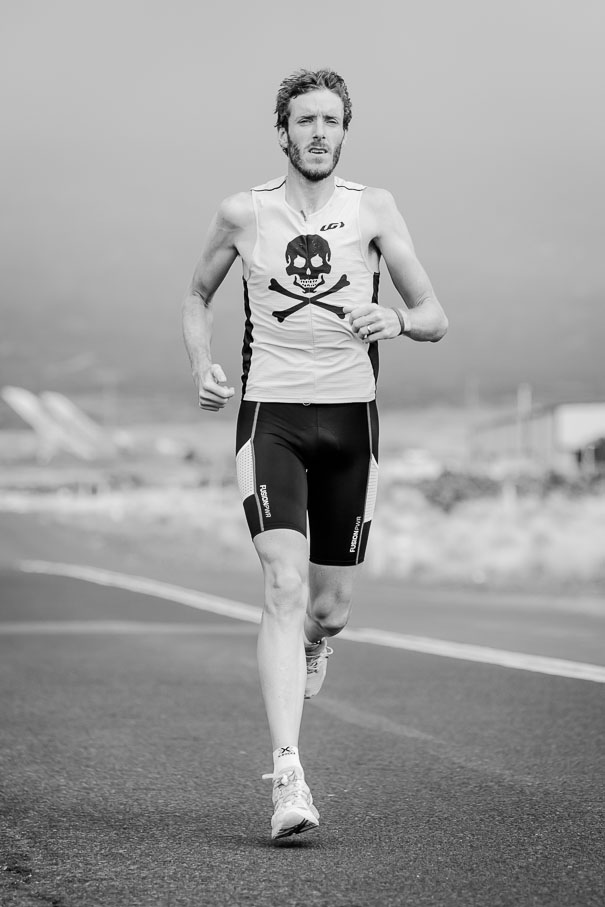 Compared to the weather on Monday afternoon when I went out at the same time of day and just poured with sweat, today just seemed so much cooler. I’ll take this on race day please Mr Weather God! For anyone who’s just arrived in the last day or so and been training in this weather and thinks ‘this is fine’ - yes, it is, but believe me it can be a whole lot different.

After getting back home I got myself showered and changed and headed out with Sharon back into town to record a little 30 second video clip for parkrun. It’s their 9th birthday celebration today (well, on Saturday - but the time differences get all confusing) and they wanted people to make little videos or photos saying why they #loveparkrun. We recorded a little video and then headed to a bar for a drink and to watch the sunset. 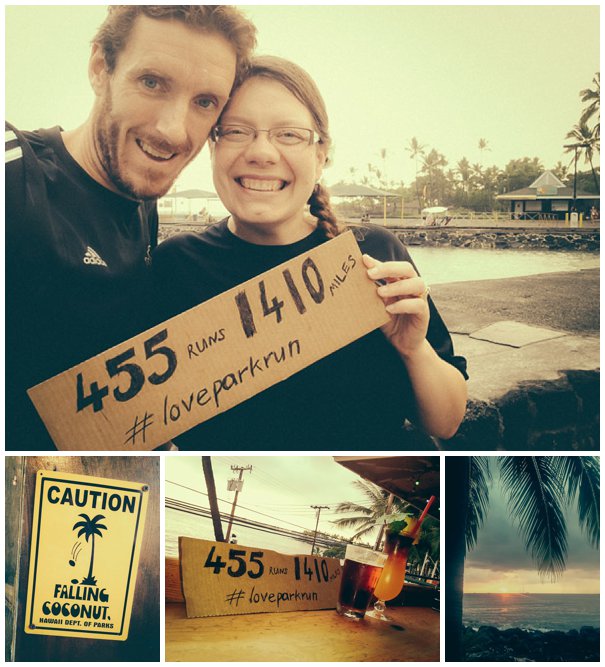 Another busy but absolutely fantastic day on this island of dreams.