By David on 21 February 2014 david triathlon

Just over a week ago I received an email from ironman.com that said the following:

“Congratulations David on becoming a Gold IRONMAN All World Athlete. Your race performances in 2013 earned you a place in the Top 1% in the world in your Age Group for IRONMAN Overall, IRONMAN or IRONMAN 70.3.”

The Ironman ‘Age Group Ranking’ system recognises the best age group athletes in the world. It is not related to the current Kona qualification system and is based on your top three Ironman races during the calendar year.

I did know about the rankings during 2013 but didn’t really care for them much as to be fair, you need to spend upwards of £1,000 pounds to enter three Ironman races in a year anyway so it’s really only for people having a mid-life crisis, some disposable income and an expensive bike, wheels, wetsuit, cycle computer, gps watch, and…

My races that counted for 2013 were Ironman Lanzarote, Ironman UK and the World Championship in Kona, Hawaii. I had an OK race in Lanzarote, an absolute blinder of a race in the UK which got me to the start line in Hawaii - where in my opinion I had an average race, but loved every minute of it.

At the ironman.com website you can drill down into the results a bit more and based on my age group (male 40-44) I’m the 30th best highest ranked Ironman athlete in the world! Haha. I’m also the highest ranked 40-44 male athlete from the UK! All off of the back of one great race and a couple of OK ones.

Well, I could name a few UK people much better than me who appear further down the list but overall it’s a nice way to get a little recognition for keeping the big wigs at Ironman driving their fast cars and living in their big houses! We do this sport for fun, we have a laugh (well, I certainly do) and try to be the best we can be. 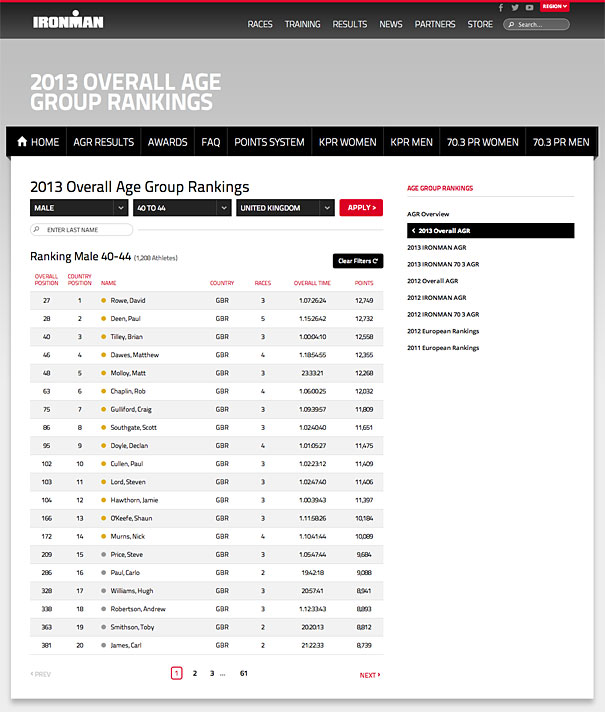