In 2009 it was suggested that a social run around the Bushy parkrun 5k course a few weeks out from the London Marathon would be a great little motivator for those long runs and also to get to share a long run with people who are running different distances - so not just for the 20+ miler club! Not The London Marathonwas born! You can read about the2009,2010,2011,2012and 2013events elsewhere on this blog.

The ‘rules’ are as follows…

The date was set for Sunday 9 March and a large number of us (around 70) found ourselves on the ‘old startline’ for Bushyparkrun. After a quick photograph we all set off to run anything from 3 miles and upwards back and forth on the Bushy parkrun route.

The weather forecast was looking promising in the days before the event and come Sunday morning the sky was clear and the temperature rising well into double figures. Brilliant. 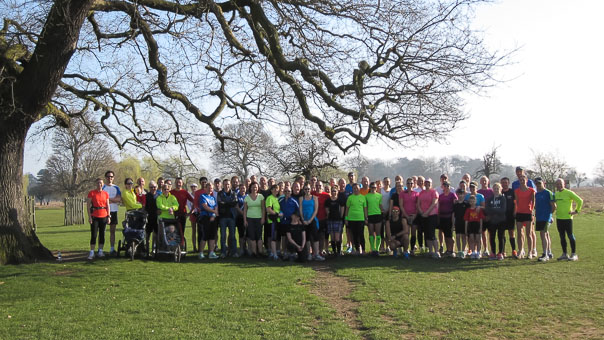 Last year we had one crazy fool (Roger B.) who ran 26.2 miles and made it his own ‘Not The London Marathon’ before smashing out an amazing race in London a few weeks later. This time with there being talk of runs up to 20 miles there was one man, Michael L. who fancied a slightly bigger bite of the cherry! 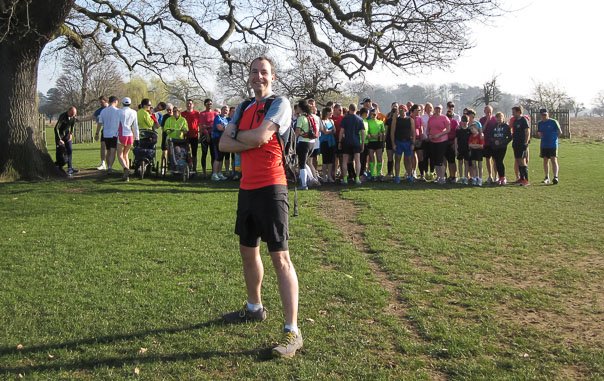 Michael - all smiles just before 9am

I had a lovely run doing four laps chatting with Tom Morgan (the swine who beat me in the Bushy parkrun points competition a few years ago) and when he decided enough was enough I pushed on for a final 5k.

Just as I reached the end of my 5th ‘lap’ my watched beeped at 2 hours and said that I’d run 15.8 miles. That would do nicely. It was my longest run since Hawaii in October last year and I felt pretty good - perhaps I’m slowly getting back to fitness.

Retiring to the awesome support and picnic area which was right by the course a large group of us enjoyed the sunshine, chatted, ate, drank and cheered on runners who were getting the miles in. It was a perfect day for it. 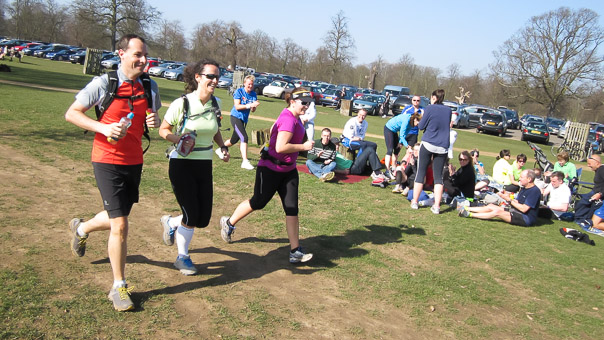 After a lovely bacon sandwich for lunch Sharon and I chatted and decided that it would be good to head back to the park and offer a bit more support - well, it was such a beautiful day after all. I stuck on a pair of shorts and thought if he fancied some company that I’d be happy to run a 5k loop with him.

When we arrived Michael had done about 40 miles so was well and truly on the home straight. I offered some support, he accepted and off we went. There wasn’t a great deal of conversation - just a bit of friendly companionship.

After my 5k was up a parkrun friend of ours (Rodney) jumped in for the penultimate lap and whilst I recovered with a bag of crisps and a can of coke I decided to offer my services for the final 5k. The offer was accepted and as the sun set and the park dropped into darkness we headed back towards the finish, with every step getting Michael closer to his 50 mile goal.

As we rounded the final tree Michael ran off to be mobbed by his harem of women (well, his wife Rachel as well as Sharon and Zoe) and Rodney. He did it. 50.13 miles logged on his GPS watch and complete respect from the rest of us. 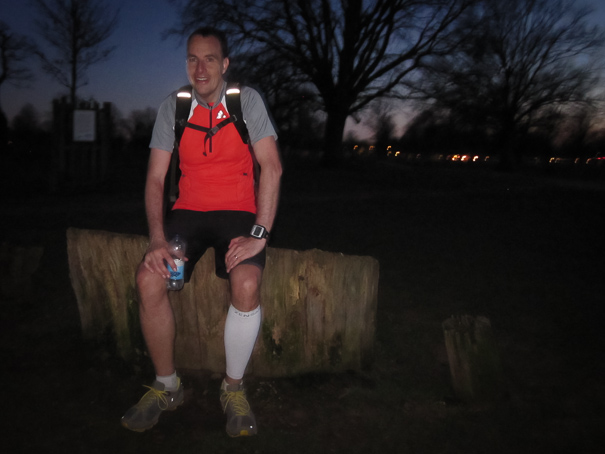