So, of the four mob-matches that our running club takes part in each year this is the second one I’ve made it to this season. This is pretty good going for me. OK, not quite as good as Ranelagh member Clive Naish who is on a streak of 121 consecutive races! David Wright is also ticking them off having completed 156 events. With there being only four each year that’s quite some going!

Anyway, it was howling with wind (so much so that I spent part of the morning doing repairs to our fence at home) and there was some big rain showers coming through. I’m not up to racing hard for nearly eight miles in the mud of Richmond Park but I was happy to help add weight to the home team to try and get us another mob-match victory.

I arrived nice and early to the club house, collected my number from Alan and Ken and then after getting changed made it up Petersham Hill to the start. We hung around for a while waiting for the 2:30pm planned start (we actually got away at 2:37pm) hoping that it wouldn’t rain before we got going.

Seeing as though I’m not running hard (yet alone even racing) at the moment I just wanted to have a steady run. Together with an easy 5k I did at Crane parkrun in the morning this would get me over 10 miles for the day, which would count as a long run for me.

I expected the park to be muddy, but not as muddy and wet as it was in places - it was sodden. Anyway, on this two lap course I dodged the big puddles as much as possible on the first lap and on the second lap I just got on with it. I had a good solid run, the wind was ridiculously stupidly strong in exposed parts (drafting the ‘opposition’ was the way forward here) and the last quarter of the race I ran and worked together with Simon Burrell, who over recent years has moved to the dark side of triathlon! At one point as we ran into a headwind he tucked behind me and complained that I was too bloody skinny!

Overall I finished 43rd out of 101. Ranelagh smashed Blackheath so get to retain the trophy for another year. My time was 58:06. I’ve previously run this course seven minutes faster but that doesn’t matter. The conditions were tough, I’m not run-fit at all at the moment and I was there to make up numbers and have fun. I did.

Finally, I was hoping to have a super cool video from the race as I had my GoPro camera with me but due to user error (well, using a low quality memory card in the camera) all I got were a few pre-race stills - one of which is this one of Alan and Ken when they gave me my number at the clubhouse before the race. 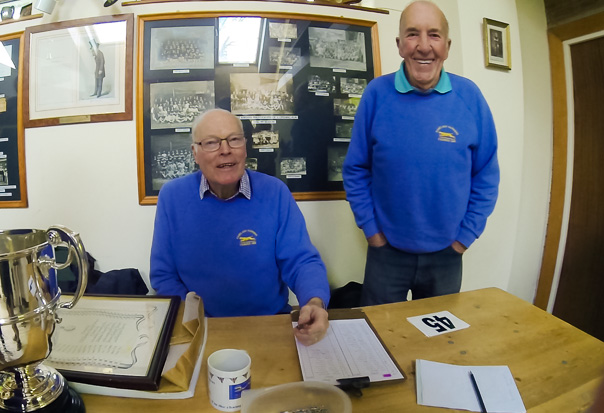