I think I finished last nights blog talking about our Bucanneer Race Team dinner. Well, we were spotted scoffing our KFC on a bench by quite a few of the others. Reading Scott’s blog he and a few others drank beer and were entertained by a hot looking waitress at a restaurant. And there we were, with Adam wearing his best ‘wife-beater’ vest, along with Gary and myself looking like hobos eating at a park bench in a parking lot by the railway tracks. 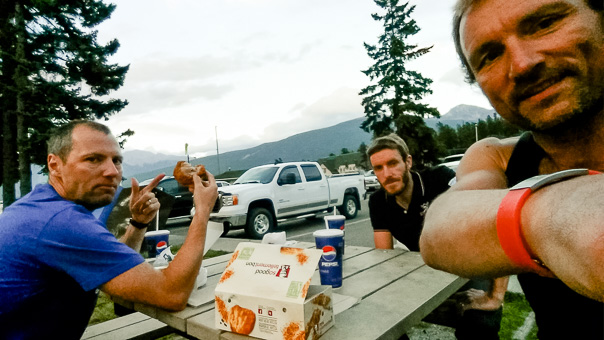 This morning we had a lie-in. Well, we had to be ready with our bikes and swim gear in a rucksack by 7:30am. We all rolled out of town and headed up a bit of a hill to Pyramid Lake (http://en.wikipedia.org/wiki/Pyramid_Lake_(Alberta)) (about 3.6 miles away). When we arrived we parked our bikes outside a hotel resort place right by the lake and just strolled over the road to a jetty that goes into the lake. Yes, we had just parked up about 40-60 thousand pounds worth of bikes, unlocked whilst we all went for a swim! 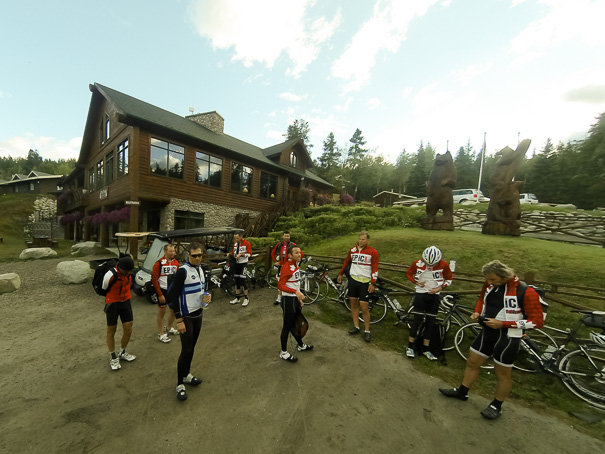 The lake was another stunning venue. I cannot believe the places we’re being treated to on this camp. John N. has done his “p’s” (preparation) prior to the camp and it shows. 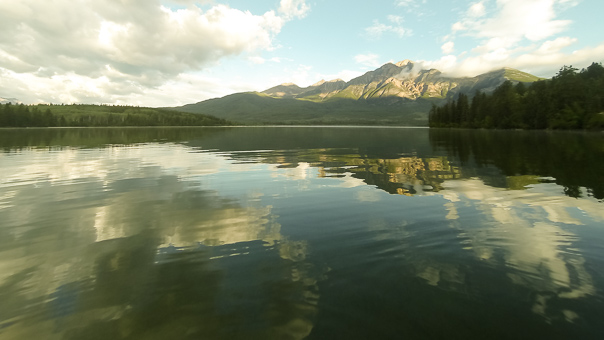 We got into our wetsuits slowly but surely (the air was rather ‘fresh’) and the first two in the water were the girls (Shannon and Leah). Shannon didn’t comment much about the temperature but Leahs description of it was ‘alright’ in her NZ accent. We all followed suit and agreed to swim clockwise round the lake for 3k.

Well, I had my neoprene cap on and I’m bloody glad that I did as the lake was cold. Very cold. If it weren’t for the stunning scenery I’d have jumped straight out. The lake is apparently 1180m (3870ft) about sea level. That’s probably part the reason why it was bloody cold. It makes sense really as I’ve just read that “During winter, a lighted skating rink is maintained on the lake surface.” 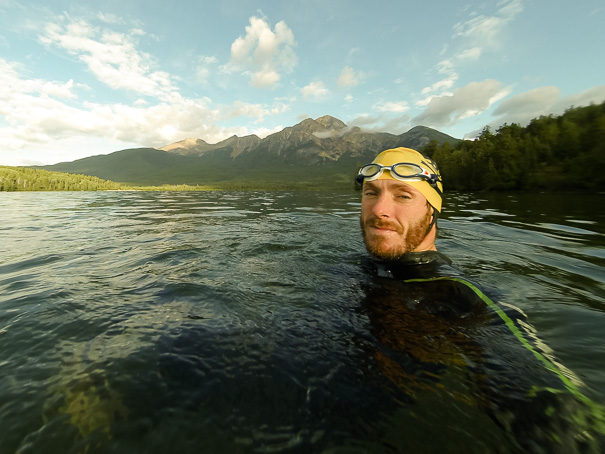 I swam. I didn’t warm up. My hands went numb. On the one hand it was horrible and cold, and on the other hand exhilerating and amazing. You just don’t get this kind of view at Shepperton Lake in West London. After about 25 minutes I found myself swimming close to Douglas. We stopped, discussed the temperature and then made a plan to cut across the lake and then head in the direction of where we started.

We got back to the jetty after about 40 minutes of swimming and saw Scott who was splashing around. He was complaining and made an executive decision for us to get out of the water. He just wanted a warm cup of coffee from the hotel by the lake. I tell you, Scott knows how to do these camps. In style.

After a lovely breakfast (who needs milk on your cereal when there’s chocolate milk available) we got ourselves ready for todays bike ride. It was meant to be about 71 miles with two KOM (mountain climbs, for points) but one of the climbs was apparently closed so we could only do one - this meant the total ride would be nearer 50 miles instead. About 3.5 miles into the ride the first climb began so we all started together today - no chance of an early gruppeto rollout. 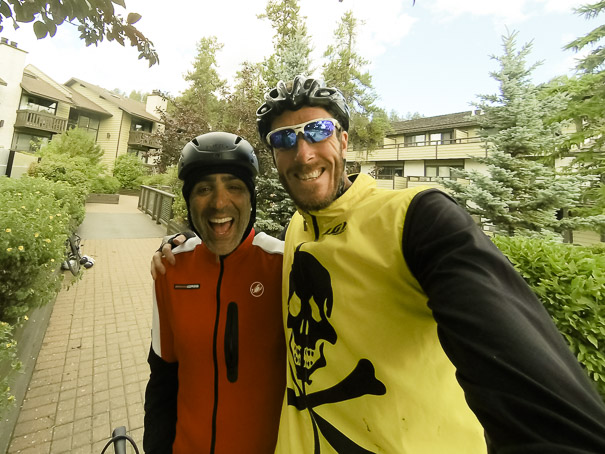 Louis and myself pre-ride

My legs were feeling good today. No idea why as they were screwed yesterday. I got near the main pack as the pace slowly increased towards the climb and then we took a right hand turn and it began. I fancied a good little push as it was ‘only’ about 50 miles or so of cycling today (unless you wanted to tack on at the end). So I did. 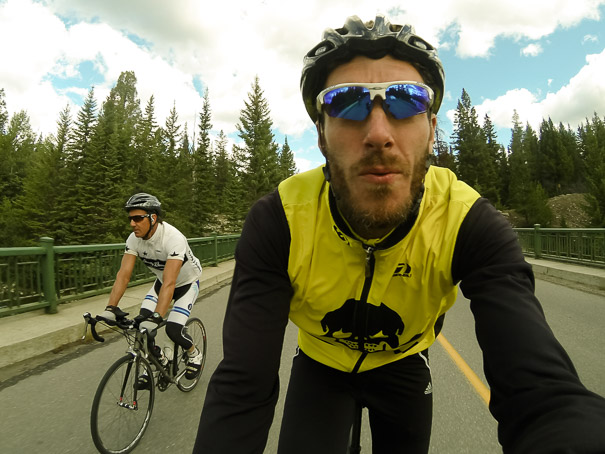 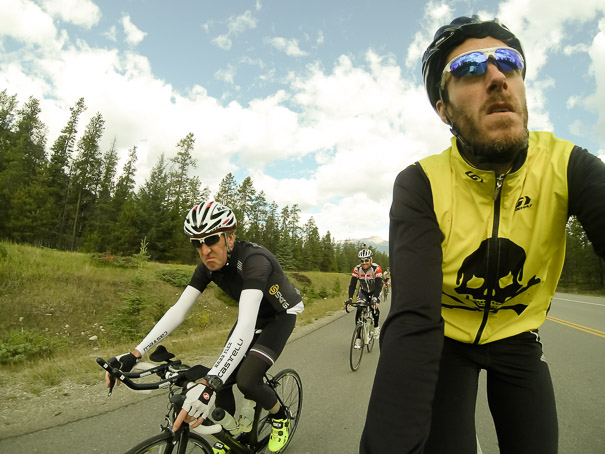 Douglas and myself. I would say he’s normally smiling but that would be so far from the truth that I won’t!

Scott made an early break. I think he was going for the out of sight, out of mind approach. The main problem here is that because he was up the road and no doubt listening to some power ballads on his ipod he missed the next turn up to the mountain proper (the skifield of Marmot Basin). He just carried on towards the final destination.

I just pedalled. And pedalled fairly hard. It’s a fair old climb of about 8 miles with an average gradient of 5 percent. Nothing too steep but just long. I got myself into a rhythm and pushed. I didn’t worry too much about who was around me (some of them were taking things serious as I saw water bottles being squeezed empty at one point in an attempt to get the weight of the rider+bike down) but slowly but surely I held my position and then crept past a few others. I’m sure they were surprised to see me as they’re normally fighting the climbs whilst I’m cruising half and hour or so behind.

I felt good, I didn’t push overly hard and safely made it to the top in fourth place. Nice. Very nice. I wasn’t expecting that. Perhaps my newly found fitness was taking advantage of those folk who’d been beasting themselves for the past week and had done a three hour trail run yesterday. It would have been nice to have had Scott in the mix as well but he was well on his way to a beer at our final destination no doubt.

We were treated to the sight of a couple of bears wandering around the hills as we waited for the rest of the riders to get to the summit. It was pretty cool. 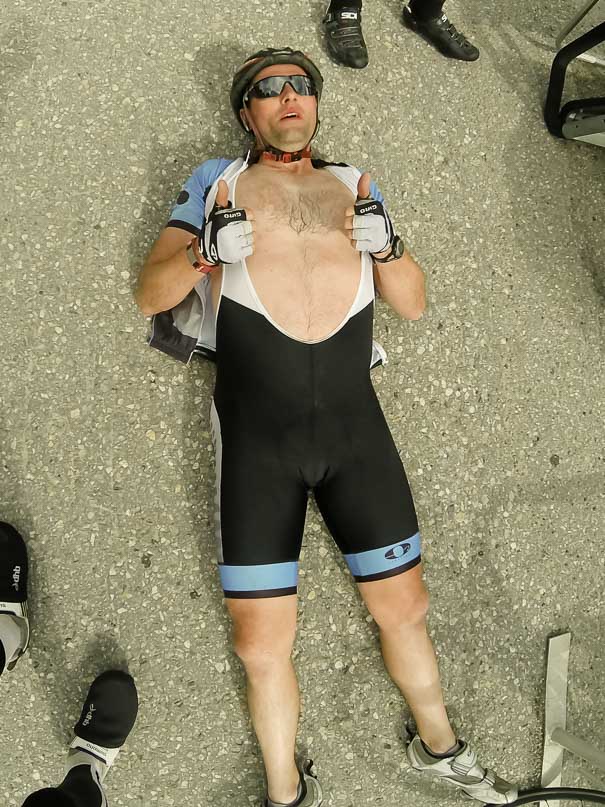 We then had a lovely roll down to the bottom (no speed wobbles this time) and then set off for our destination - Sunwapta Falls. I rode with the front group for much of the rest of the ride until I fancied backing off and taking it easy. Phil, John and Gareth came past after a little while and at that point I jumped aboard their train all the way to to the end. 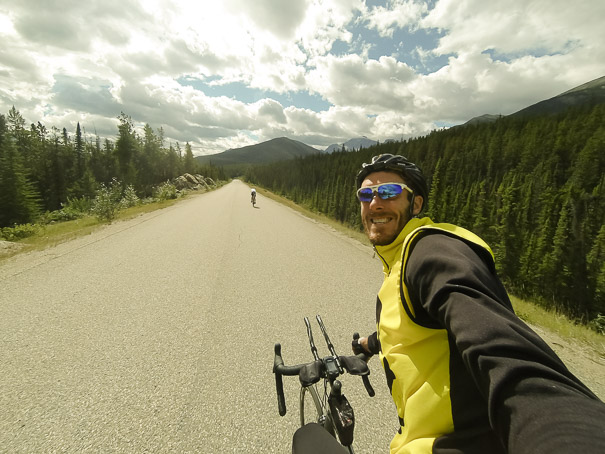 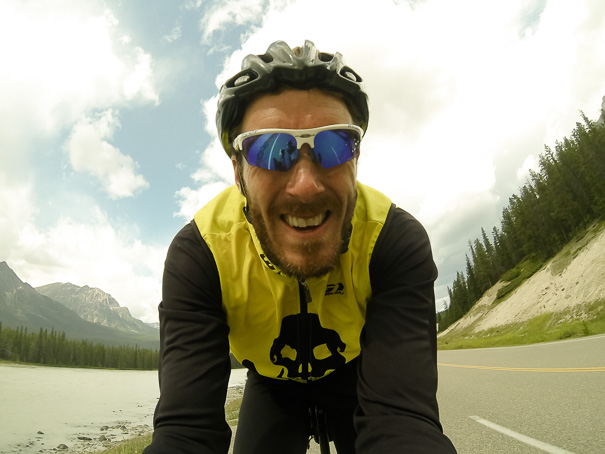 It was a good solid ride, and when 50 miles seems short it’s quite amusing. We had some drink and snacks whilst the rooms were being sorted (Scott had a recovery beer of course) and then got our run kit on for a 10k trail run. 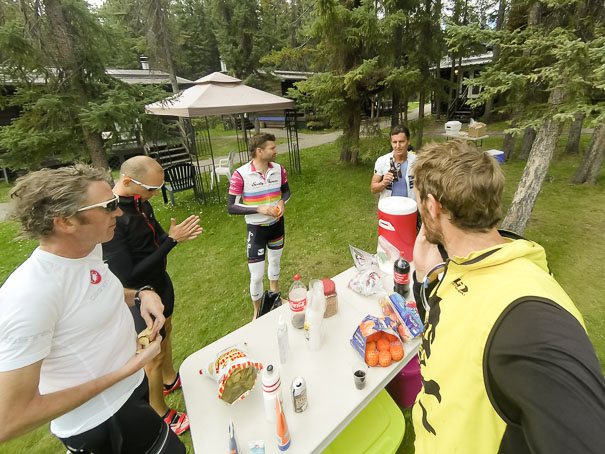 The run was beautiful (as per usual). There were quite a few tourists walking parts of the trail as there’s a really cool waterfall nearby (that’ll be why we’re staying at Sunwapta Falls then). The trail surface was similar to yesterday - rocky, covered in tree roots and hilly. Just the thing you need when you’re tired! There were a couple of fallers during the run this afternoon - just a few cuts and hopefully nothing too serious. 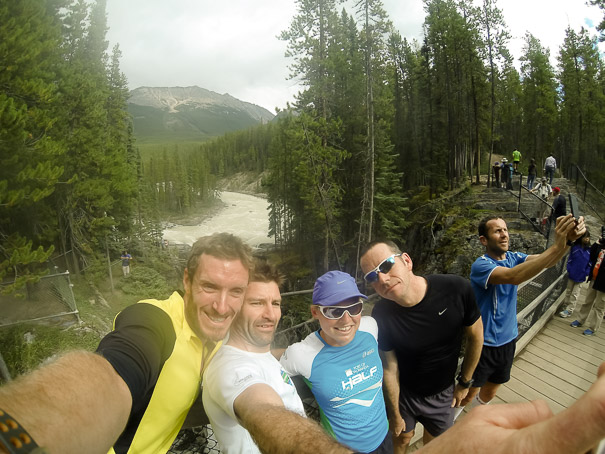 John loves a ‘selfie’ photo - but only with himself. No group photos for Johnbo! 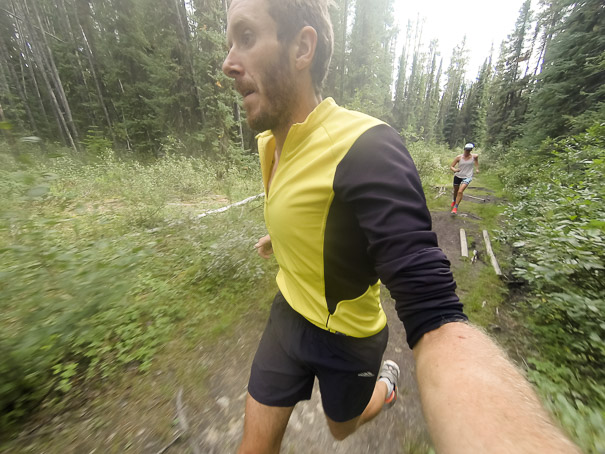 We were finished by just after 4pm and this felt like an easy day - even though we started at 7:30am! My perspective on training is very very different now compared to what it was a couple of weeks ago. It’s crazy. 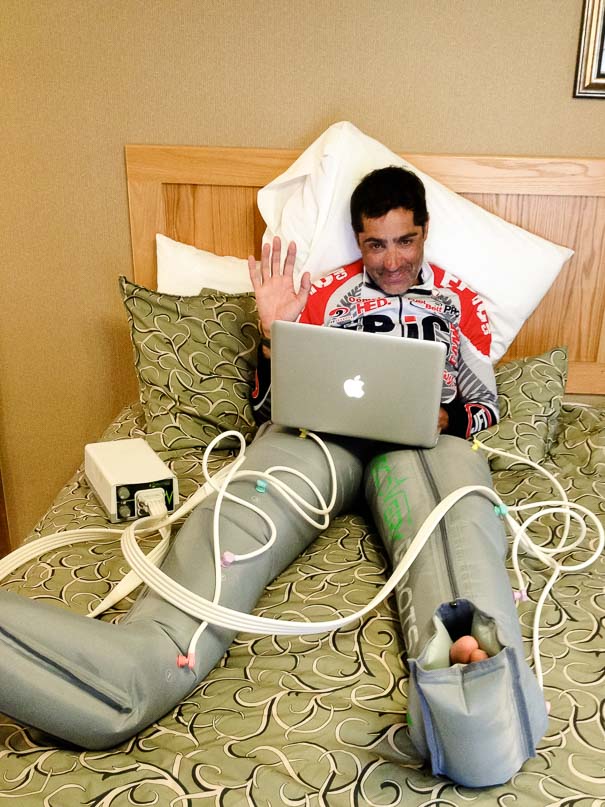 As the day turned to evening we had a pretty big thunderstorm roll over (Gary and Adam were still tacking on some miles) and after dinner as I write this there’s another storm outside the window. We’ve been told to prepare for potentially cold and wet weather tomorrow. Nice!

The plan for Thursday was given to us as dinner - meet at 7am ready to run to a lake that’s 4k away. Once John jumps in the lake he’ll decided how far we need to swim. We swim, then we run back. 8k of running will count as the minimum distance for the day. Pack our bags, have breakfast and then shortly afterwards we have a 177k (110 mile) ride to Lake Louise - which is apparently stunning, rather high up (1600m, 5200ft) and with a lake that we’ve been told is too cold to swim in.

Dinner was lovely - I had some pasta dish with buffalo or something in it. Bit of ice cream to finish and a beer. The group probably ate the restaurant out of garlic bread as well. Carb loading in truly Epic proportions. As John read out the plan for Thursday he recapped the KOM results from earlier in the day and my surprise 4th place got a little round of applause!

The ride has two KOM climbs in it but I’ve no plans to repeat todays fun and games.

Another long day coming up.