20 odd folk with laptops and free wi-fi at a hotel/lodge/whatever does not work when you’re on Epic Camp. It just grinds to a halt. Every night. Guaranteed.

After a reasonable nights sleep I was up at about 5:45am. Louis (please read his blog from yesterday - it’s lovely), who’s been in this sport for many a year (he raced Hawaii in 1988 - the year Scott came first), he’s done Kona about 7 times and was sporting a 1994 finishers t-shirt at dinner last night. Anyway, that sentance didn’t really go anywhere so I’ll try again… Louis appeared from his room just after six clutching his wetsuit. He didn’t say much. I asked if I was going to swim 6k as he was up so early. He quietly said “No, I just wanna get it done and out of the way.”

Shortly afterwards (once the coffee was brewing) Scott appeared wearing the same casual clothes he went to bed in. I commented on this - “Sleeping fully clothed just saves time on all the changing clothes stuff.” Fair point.

I got myself down to the lake for about 6:30am and ticked off my swim. 55 minutes or so of splashing was about 3k in my book. My arms felt great for the first half hour. Then they didn’t want to work. They’d move and everything, but just not have much power to propel me through the water. I felt tired.

The ride was set to leave at 9am so the ‘Dream Team’ (you read Louis’ blog right?) set off at about 8:35am. Today we had an extra rider on board - Charles (or Charlesey). Well, he left about 2 minutes before us be we caught him at the first intersection (about 1 minute up the road as I don’t think he knew whether it was left or right!).

The six of us (Charles, Louis, Shannon, Leah, Gareth and myself) then headed off on the main road. The GPS wasn’t really needed today - it was just about 110km (around 68 miles) on the same road. No turns, no traffic lights, no junctions, nothing. Just keep pedalling. 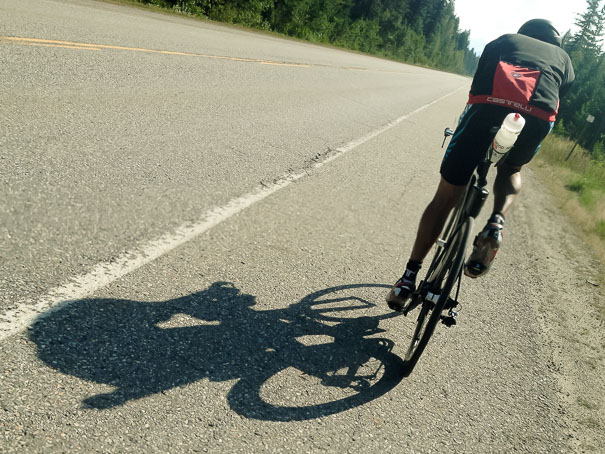 So that’s what we did. For about 50k before stopping briefly at an aid station that Mark had set up for us. We topped up our bottles, peed at the side of the road (there were no trees nearby and to be fair none of us could give a crap about who sees what and when!) and then set off. The scenery was awesome. We spent a lot of todays ride skirting the edge of the Blue River. It was blue, and a river. A very nice blue looking river. 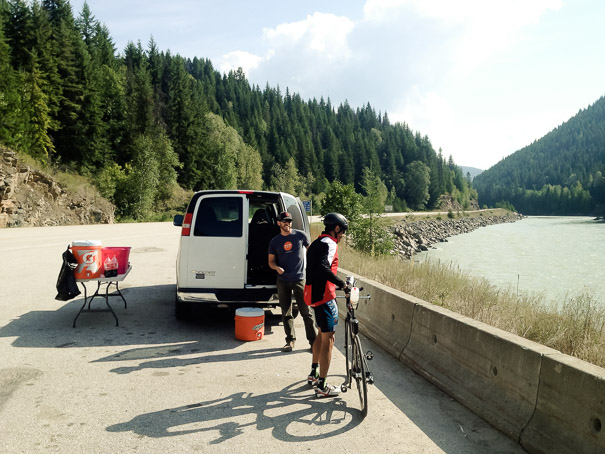 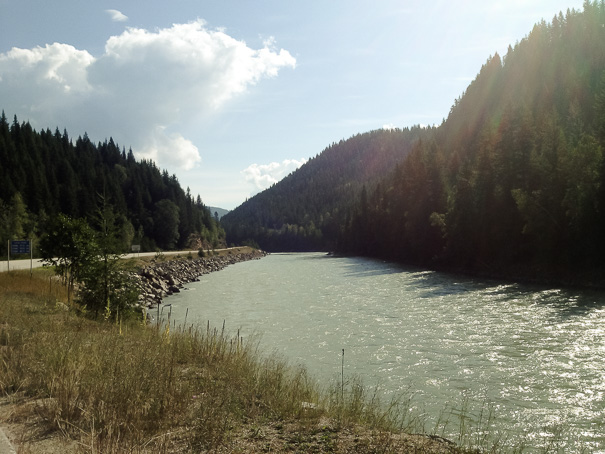 We seemed to up the pace a bit after the aid station and even so Gareth and Charles threw us out the back door. They were strong. So much so that Gareth has now been promoted to the main ‘fast’ group. He’s not welcome with us tomorrow!! If he’s flung out the back door on Mondays long ride then we’ll have him back, but he’s getting stronger by the day and he’ll only be frustrated riding with us. 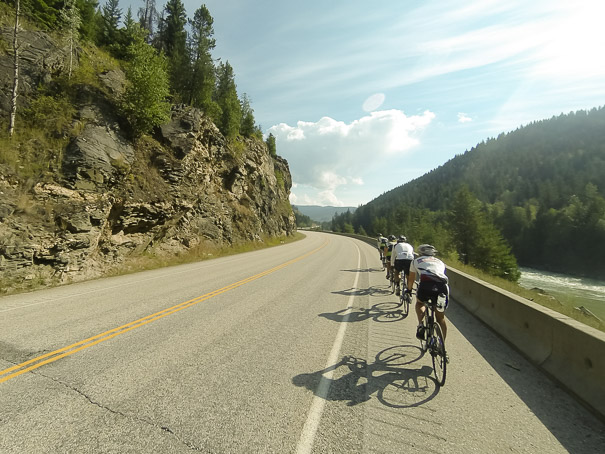 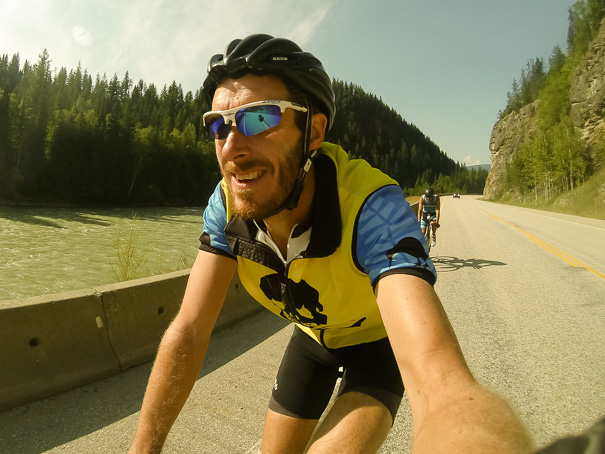 At about 85k (53 miles) we knew there was a bit of a hill. The biggest one of the day. It was just under 2.5 miles long but it was hard work. Really hard work. My legs weren’t happy today. I’m getting tired. About 3/4 of the way up Louis appeared from nowhere and flew off the front. I jumped on the back of him and made a comment about his sudden accelleration. He normally does this just before an aid station! 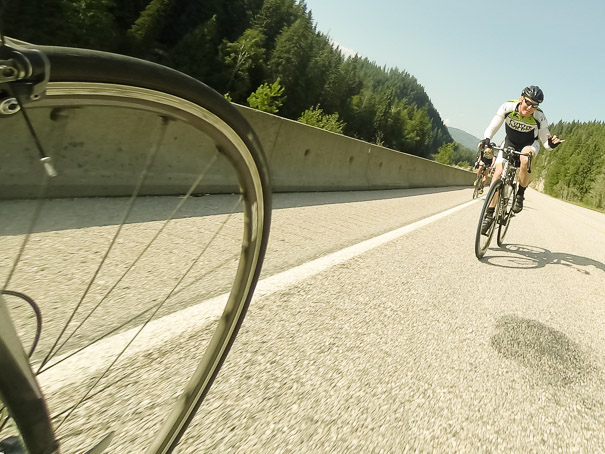 He replied “I’m hurting so bad I just want to get to the top of this fuckin’ hill.” Fair enough.

Once at the top it was nice rolling all the way to a town called Blue River where we would stay for the night. 68 miles on the bike. Job done.

When we arrived we then had our compulsary 10k run to do. I grabbed some run gear from my bag (our rooms weren’t ready yet) so slipped on some running shorts in the car park and headed off. 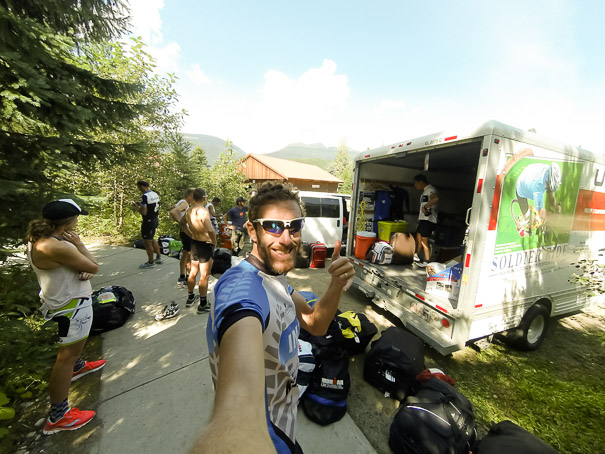 During our run we took a 1k detour to investigate a sign we saw for something called River Safari - we were about 7k into our run, quickly investigated what the situation was and then booked ourselves onto a trip leaving in 25 minutes. Charles had his credit card to hand and whilst he made the booking Shannon, Gareth and myself did our remaining 3k and got back in time for our trip. 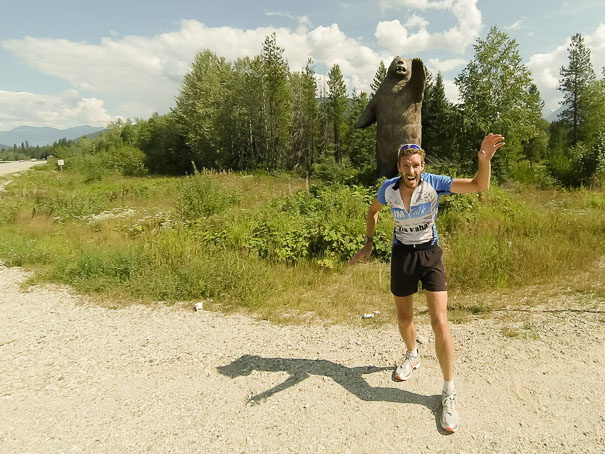 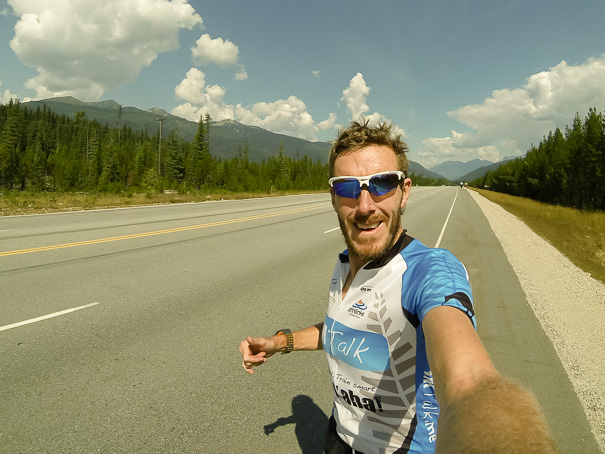 The trip was pretty cool - we jumped on a boat with a load of other foreigners and cruised around a huge lake. We saw three black bears wandering around the waters edge and had plenty of time to get up close (at a distance in the boat of course) to them. We were then taken to a waterfall (little compared to some of the ones we’ve seen in New Zealand) and then headed back to base. 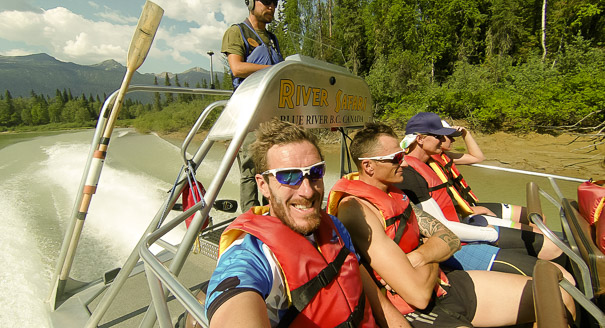 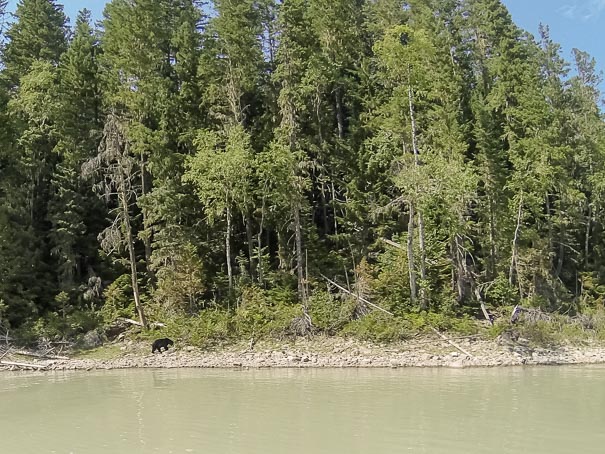 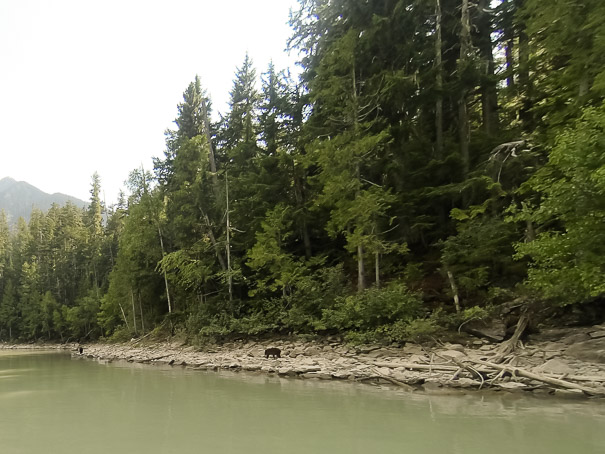 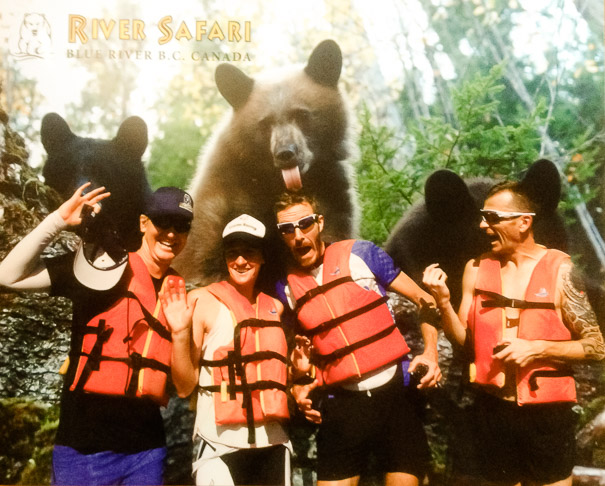 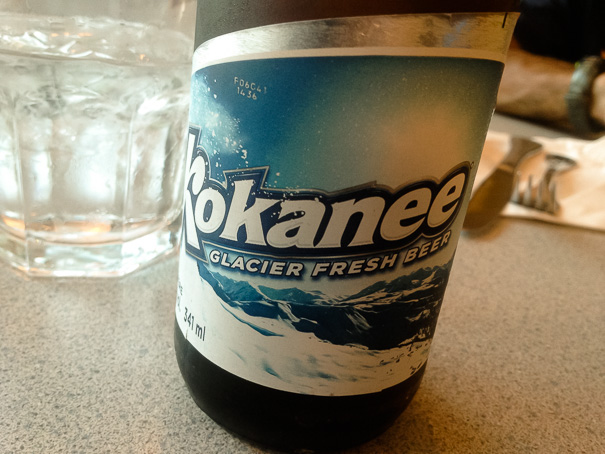 We then walk/jogged the 3k back to the ski lodges that we’re staying in, got ourselves ready and headed over the road to some huge diner type place for a big old plate of ribs and a Canadian beer. I had a lovely meal and chat with Leah, Louis and Douglas. Douglas and Louis have loads of stories to tell from previous Epic Camps and spoke very highly about the likes of Steven Lord and Russell Cox - two UK based athletes who are friendly faces to a number of the people here on camp.

After dinner we were then given the delightful news of Monday’s schedule…. meet at the lake (right by where we’re staying) at 6am ready to swim. A 2k swim followed immediately by a 7k run. After that it’s pack the bags, have breakfast and then set off for the town of Jasper, some 130 miles away! On top of that the clocks go forward an hour because we move time zones. 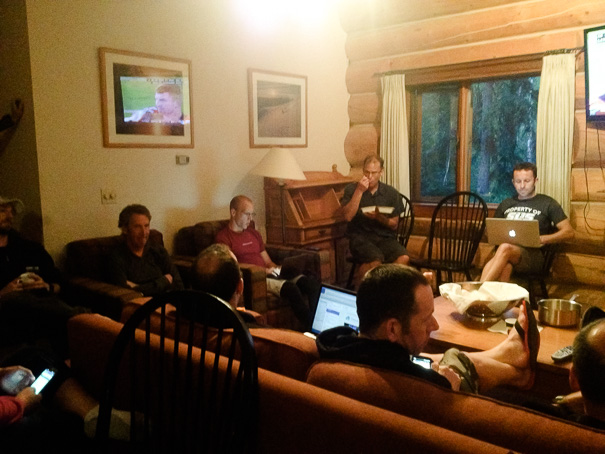 Monday is going to be a bastard of a day, guaranteed.

I’m getting tired now, we’re six days into the camp, another six to go and things are going to get tougher. I just need to get through each day as it comes - enjoy it (I really am, no matter how tough these days are I’m with a great group of people and we’re putting ourselves through this stupidity of our own doing!). In a weeks time I’ll be sat on a plane drinking wine from a plastic glass and thinking about what a amazing time I’ve had. I just need to get through the next few days, starting with a swim at 6am tomorrow.

See you on the other side!