Today was the big one - a 210km (around 130 miles) bike ride. I’ve never ridden this far before. And certainly not after riding 470 miles in the past six days! Of course we had a few other activities to get through first - namely a swim and run!

We have a 12 hour training window given to us by the organisers of Epic Camp. This allows the crazy folk to add on extra training at the end of the day as time permits. Today the chances of this were very slim, especially as we change timezones during the ride and lose an hour!

So, to get things done an executive decision by John N. and Scott was made last night that the swim would be set as 2k and the run 7k. This would give us a chance to get the ride done before dinner! At 5:45am (after a pretty shocking nights sleep) I was stood in my wetsuit in one of the big log cabins we’re staying in chugging back a strong coffee and eating a banana. Living the dream! 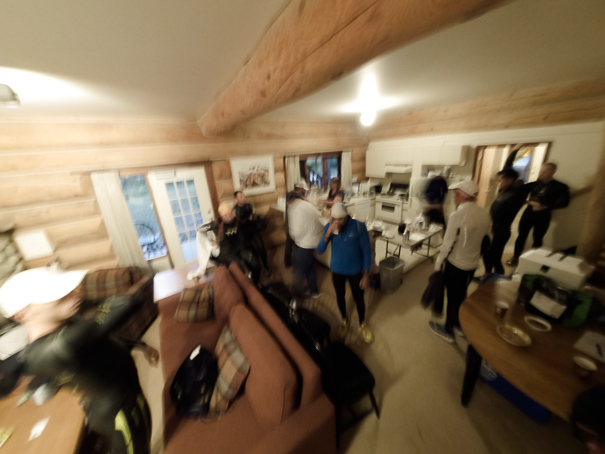 At 6am we were all down on the beach of Eleanor Lake - a little lake right by where we are staying. The plan was for two and a bit laps round the lake which would be about 2k. Unlike Sunday morning at Clearwater where I really didn’t fancy a swim today was different - I had a lovely little splash. The mist on the water made it look lovely and as we swum around the lake the sun came up over the distant mountains. It was stunning. 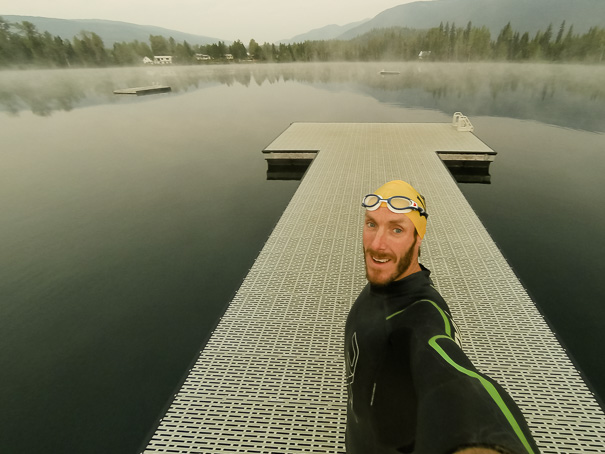 Once out of the water with our swim ticked off it was running shoes on, a long sleeved top (as it was a bit chilly) and a 7k run. I just kept my swimming trunks on so probably looked quite a sight out there this morning! We ran along the railroad tracks by where we were staying - mainly so I could see these enormous interstate trains that were keeping me up half the night!

Without fail a train came along and the obligatory daft photo was taken. 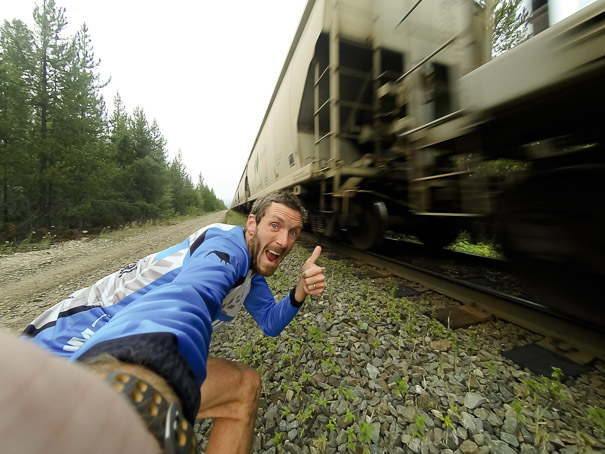 Once the run was done I got back to the room, packed my bag up, dropped it off at the van and went for breakfast. On camp you’re not allowed breakfast until you’ve dropped your bag off at the van - so that I did and then was treated to a huge (and I mean huge) pancake with syrup, honey and nutella (I just couldn’t decide what to put on top so I went for everything). Followed by porridge. As you do. 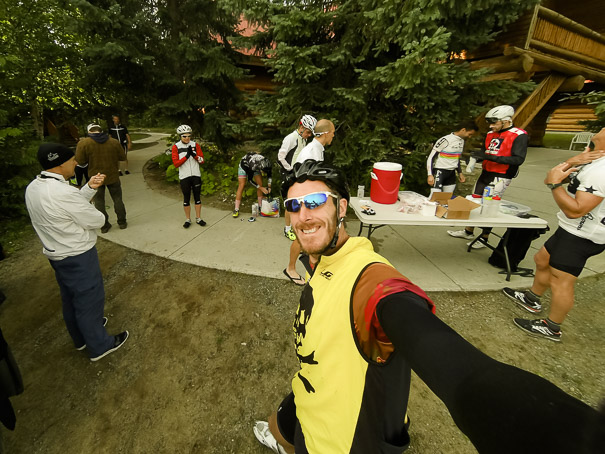 Get ready to start the ride

The weather today was mostly cloudy. We’ve had beautiful weather for the past week and today it’s starting to change. The forecast looks like it’s going to get pretty bad towards the end of the week. By all accounts it’s much better to end on bad weather as riding in wet gear does you no favours for your ‘under-carriage’ and then it never gets a chance to heal. All things considering I’m doing pretty well in that department so far!

Todays ride for the competitive types included a KOM (King Of the Mountains) climb at 135k. Well, the climb started at about 130k but the race to the climb started at 50k. This was not in any plans of mine to get out of the camp (I’m just not fit enough by any stretch to ride with the fast boys) so once again the ‘Dream Team’ set off nice and early to get a head start on the long ride. During the early miles we saw a bear just off of the main highway. This is bear country after all! My bear sighting count is currently on six. 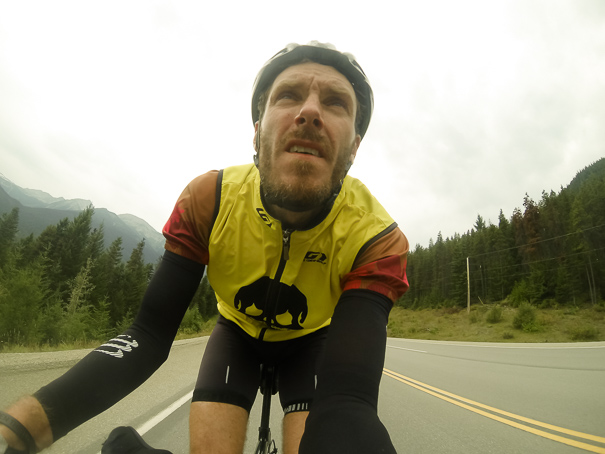 We were joined by a couple of others for the first 50k (they peeled off at the aid station to then get involved in the KOM race) but after that it was just Louis, Shannon, Leah and myself riding it through to the climb. 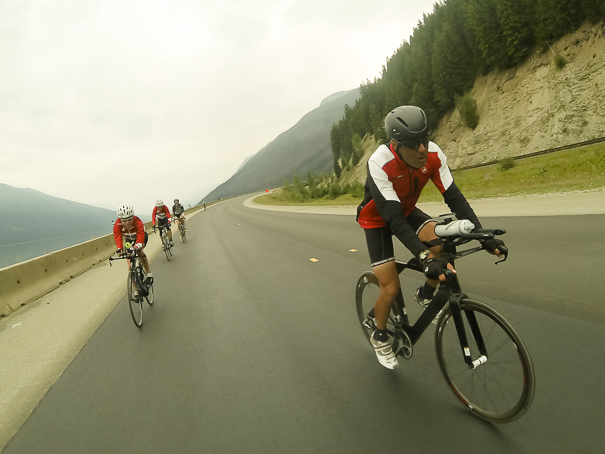 We got to an aid station at 115k and after a quick toilet stop we had about 30 seconds warning that the fast boys were about to appear. We all jumped on our bikes and got swallowed up by them for differing amounts of time. I jumped in for only a few minutes and to be honest it didn’t seem like fun at all. If I was strong enough to ride all way with the boys then it might be good but I’m here for a different reason so it didn’t tickle my fancy at all. There may be lots of camaraderie between the guys but the riding style just didn’t work for me. 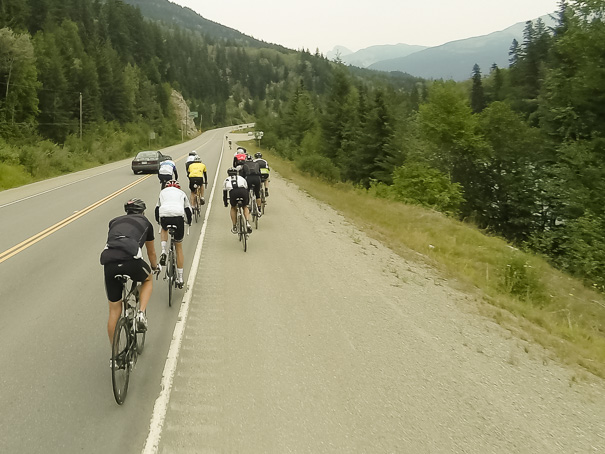 So, after only a few short minutes I fell off the back and watched them pedal off into the distance. Before long I hooked back up with Leah who was a little way back and we cruised all the way to the top of the big hill, where lunch awaited. Shannon mixed it up on the climb and was third to the top (she’s mega strong when she wants to be) and Louis enjoys a bit of climbing, but then again he probably weighs as much as one of my legs and doesn’t let on how much he really trains for this stuff!

A quick lunch was eaten and then we regrouped for the 50 miles to Jasper, our destination for the evening. 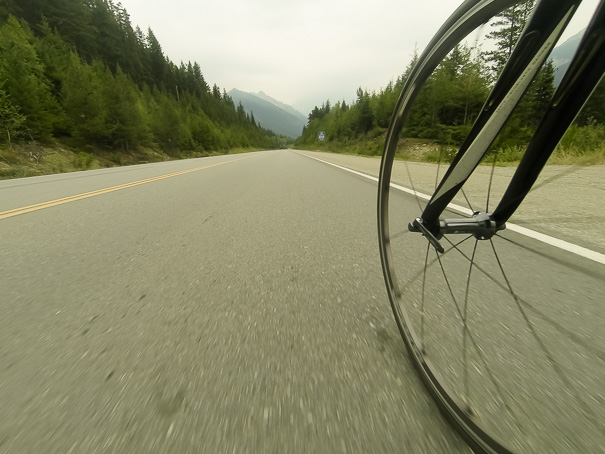 During the ride we left the province of British Columbia, where we’d been since arriving on Monday and entered Alberta. At this point our clocks go forward by an hour so that’s another hours less sleep we’ll be getting tonight! Just what you need after a long day of training. 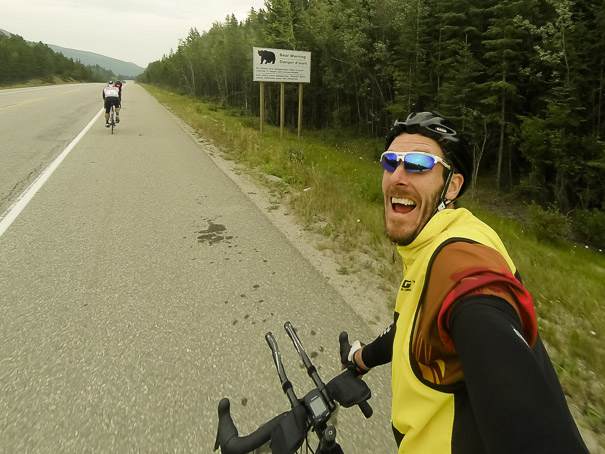 The sign says ‘Bear Warning’ - All bears as dangerous. Stay in your vehicle.

About 10 miles outside of Jasper we quickly noticed that Shannon was nowhere to be seen. Although the general riding rules at Epic Camp are that if someone gets dropped or has a mechanical you just ride on and let them deal with it themselves, our little group just wouldn’t let that happen. We turned around (typically it was at the bottom of a hill) and headed back up to see what was going on. Just as we got to her (who’d just fixed a puncture) my back tire suddenly punctured! Gareth and Shannon then rolled it gently to Jasper whilst Louis and Leah stayed with me as I changed my inner tube (I’d rolled over a piece of sharp wire that went straight through the tire). During this time the rest of the riders rolled through and once I was back on the road again Louis said he was going to go and ‘have some fun’ (i.e., race back to town) so it left Leah and myself to push the final miles. 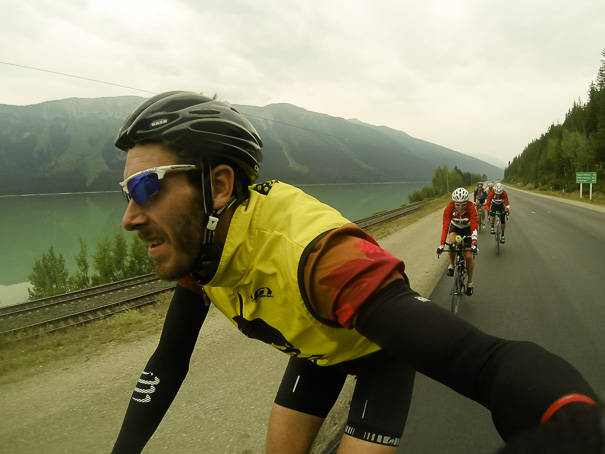 So, just after 4pm (or 5pm in the new time zone) we rolled into Jasper having clocked 214k on the bike (133 miles). We’re staying in a nice hotel just off of the main strip and there’s four of us to an apartment. Bikes were parked in an area for ski kit and then that was it for the day. 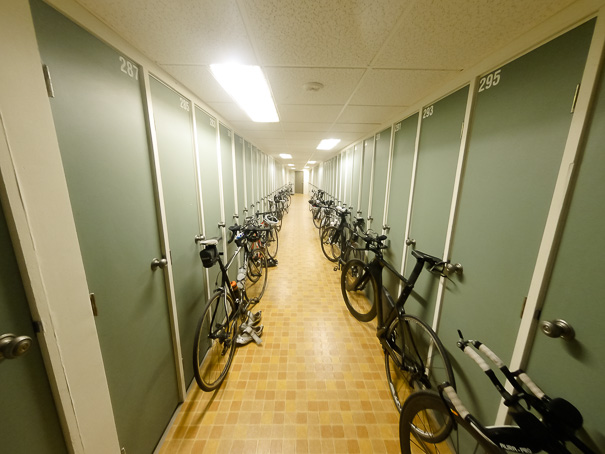 We relaxed over a combination of chocolate milk, crisps, a snickers and a beer (the beer was courtesy of Scott, who’s always walking around with a beer within seconds of finishing a ride) and after relaxing for a bit headed off to dinner in the hotel restaurant - which was bloody lovely and hit the spot just right! 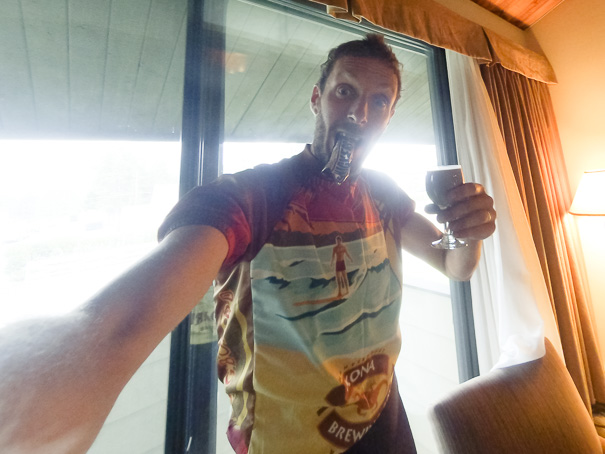 Snickers and Chocolate Milk - served in a wine glass of course!

My legs felt pretty good today, I had a nice swim, an enjoyable run and a long but pretty pleasant ride. About eight hours of actual exercise time was done today and although I’m bloody knackered, I’m feeling not too bad.

I think much of this sport requires the right mental frame of mind - I knew that today would be a long day - it was but it didn’t seem horrific at all. I think the toughest day I had was the day we did the triathlon race (day four) - and that was the day with the least hours of training.

Its gone 10pm now, I’m spent and I need some sleep before the 5:15am alarm call (which will really feel like 4:15 because of the time change!) as we’ve got the local swimming pool booked for training from 6am! I’ve not swum in a pool since Tuesday last week (the huge outdoor pool in Vancouver on day one) so it’ll be quite a change from that and all the beautiful lakes we’ve been in this past week.