Charlesy (I’ve used a number of different spellings of his name over the days but I’ll try and stick to this one from now), Shannon, Gary and myself were roomies last night. We all get on well and all had an obligatory ‘go’ of Shannon’s Normatec Boots. Here’s Gary showing how cool they are! 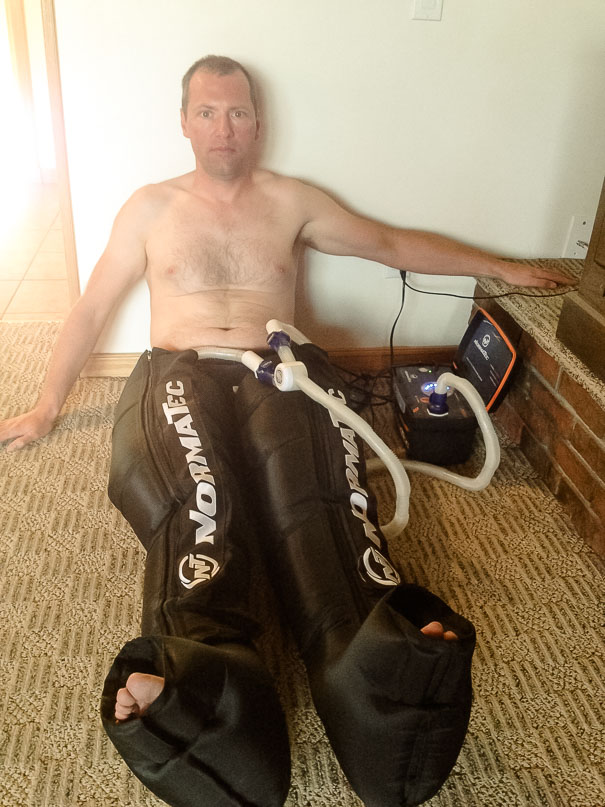 For those who have no idea what I’m going on about, it’s probably for the best. They’re like a blood pressure thingy but strapped round your legs. The compression is pretty high and is apparently good for you.

Anyway, Gary drugged himself with up all sorts of sleeping tablets and painkillers, and after the odours I was producing after all the energy bars I had on the ride yesterday he was knocked for six!

Just after 5am we were awake (six hours sleep is not enough) and the coffee was brewing. We were instructed to meet by the hotel reception at 5:50am and then walk to the local swimming pool for 6am. We’d booked the entire swimming pool out this morning for the first hour - I think they opened up especially early for us today. 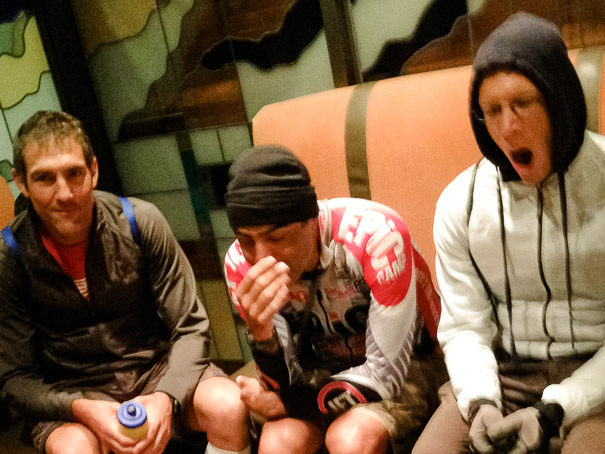 Barry, Louis and Adam K. are not overly keen on a 6am swim session

A quick 500m ‘warm up’ and then the fun and games begain. We started with 400 individual medley races. What the actual fuck! I was in the first ‘wave’ and this started with 100m butterfly stroke. OK, I can just about do about half a length of butterfly (or something resembling an butterfly falling from the sky whilst dying) but four lengths. You are having a laugh. 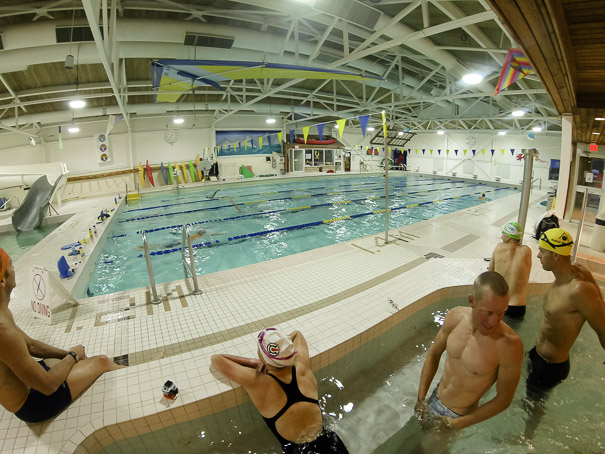 Watching the action from the jacuzzi pool

Well, I think everyone on deck had a laugh that’s for sure. At the end of each length I paused briefly, gasped like i’d been suffocated for the past 45 seconds and then swam on. It wasn’t pretty. It probably wasn’t even recognisable as butterfly. But I did it, and I wasn’t the slowest. 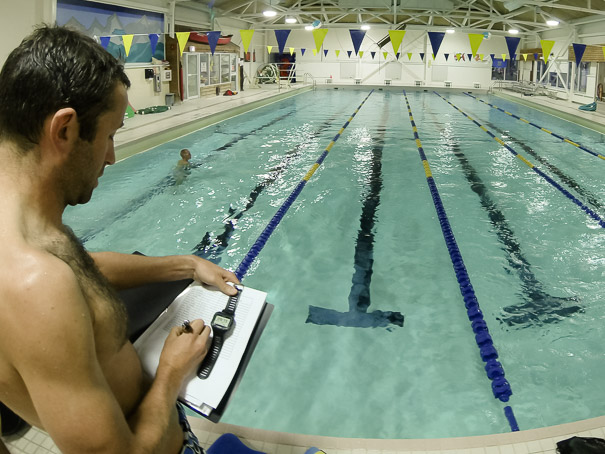 Then it was backstroke for four lengths. That’ll do nicely - at least I can breath air rather than water for a while. I am not a fish, I cannot breath water no matter how much of the bloody stuff I drink. 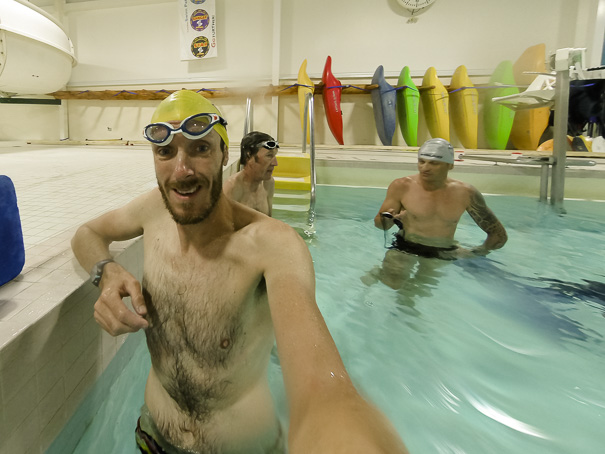 Thankfully the only photo of me in the pool. Not swimming.

Four lengths done (I only hit my head once on the end wall) and then it was breast stroke before a final 100m of freestyle (front crawl). My time… well, I’m not sure about that (I’ll find out and put it in the blog at some point) but I was happy to complete. Epic Camp for me is about ‘camp completion’ and I’m getting one step closer. 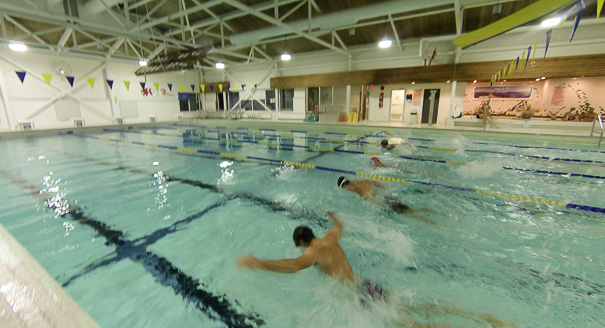 The big race was between Newsom, Molina and Petro. Molina took it out - just. It was great to watch and there should be some video of this somewhere soon enough. Adam K was actually first to finish but there’s a stewards inquiry relating to an early start taking place! 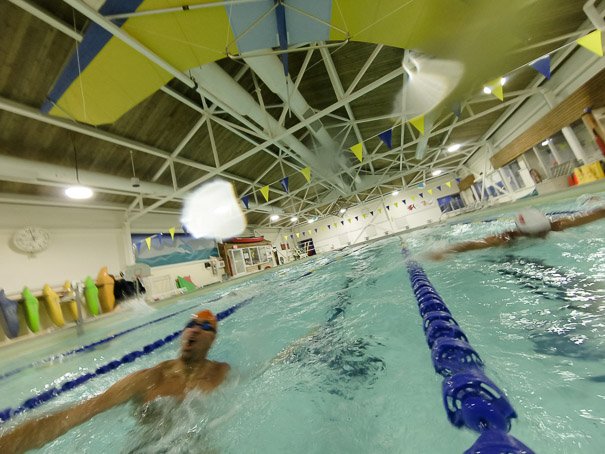 Of course that wasn’t the end of the racing. We then had 200 meters of ‘kick’ - this means holding a float in your arms and just kicking. Sounds easy eh? Well, I assure it is not. Well, if you are good at propelling yourself forward with your feet then yes, but I am not. I did it, I wasn’t last. Tick.

The final ‘event’ was 50m of freestyle. That’d be fine. Two hard lengths. Of the pool! I was in the same lane as Adam and we were neck and neck the entire time all the way to the finish. 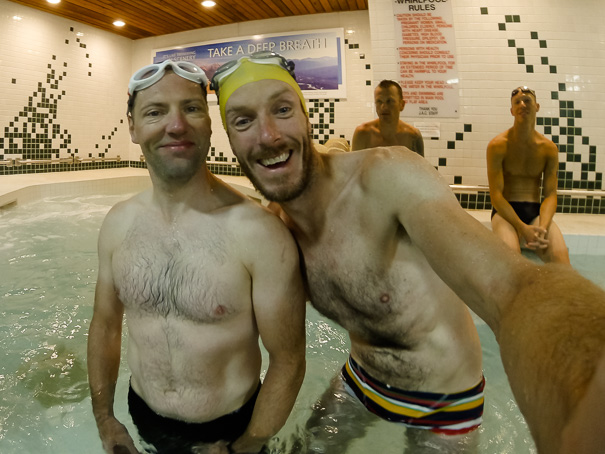 Of course not, we had a 3k minimum to do today so another 1850m needed to be ticked off before breakfast.

We left the pool shortly after 8am, that’s two hours after arriving. I’ve never been to a pool for two hours before. Bloody ridiculous. 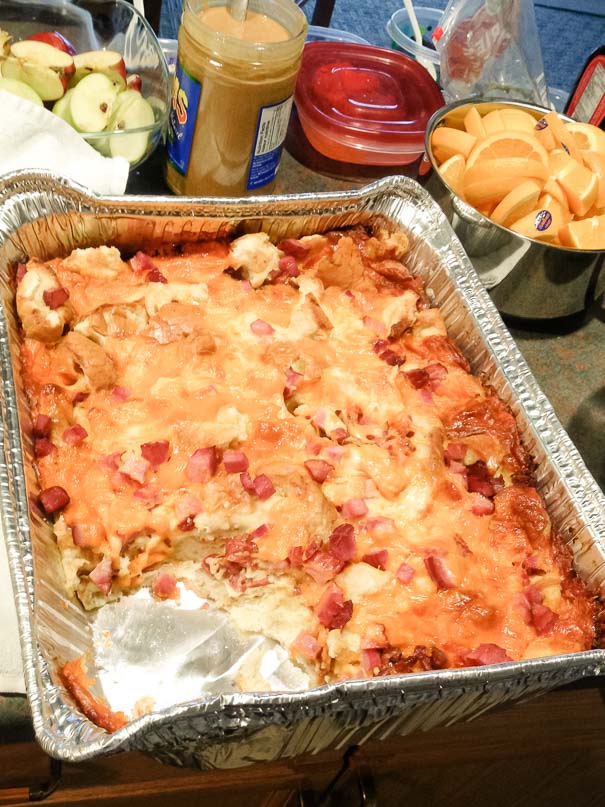 BreakfastBack at the ‘ranch’ we were treated to an ‘egg casserole’ by Michelle, one of the support crew. It was lovely - egg, bacon, cheese, bread - all mixed up and baked in the oven. That and a pint of chocolate milk hit the spot. I love my chocolate milk but I think Shannon likes it more - the girl is obsessed with the stuff. If you say the words ‘Chocolate Milk’ to her she lights up almost as much as if you said to me ‘David, the pool is closed today so no swimming.’ It’s like that!

We’re staying in Jasper for a second night so we don’t need to check out today. That’s nice. It also means that we have a ‘easier’ day today as we’re not cycling 100 miles or so to a new far flung destination.

Whilst a few were knocking out an extra 3k in the pool myself and some of the others relaxed ahead of meeting up at 10:30am for a trail run. Gary zipped up the magic boots and fell asleep for about 45 minutes.

We all met up at and split into two groups - a smaller group going up into the hills and the rest of us following John Newsom who said he had a fairly flat route. He was planning a two hour run. I was just planning a run - whether it was an hour or 90 minutes it didn’t really matter.

Clearly I must be getting a little tired as it was noted whilst waiting for the run to start that my shorts were on back to front. Oops! A quick change in the hotel car park and all was good!

When we eventually found the trail it started off flat. Then we went up a flight of wooden steps. After that it went crazy. Up down, narrow, even more narrow, up again, on the ledge of a bloody cliff, over tree roots, rocks etc. We slowly split into smaller groups and after about 45 minutes three of us decided to take a different fork in the path (it was pretty clearly marked every couple of miles) and followed a route that would get us back to Jasper. 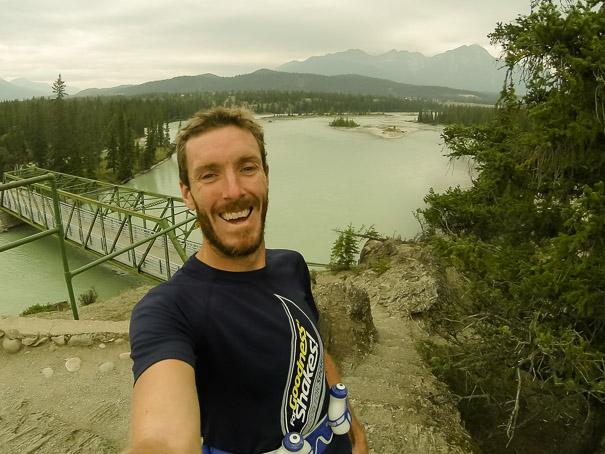 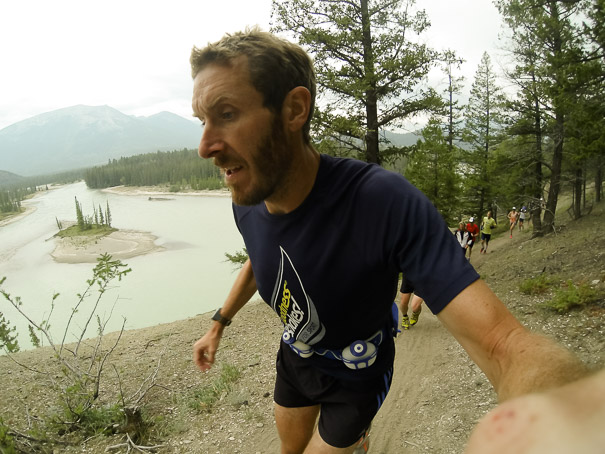 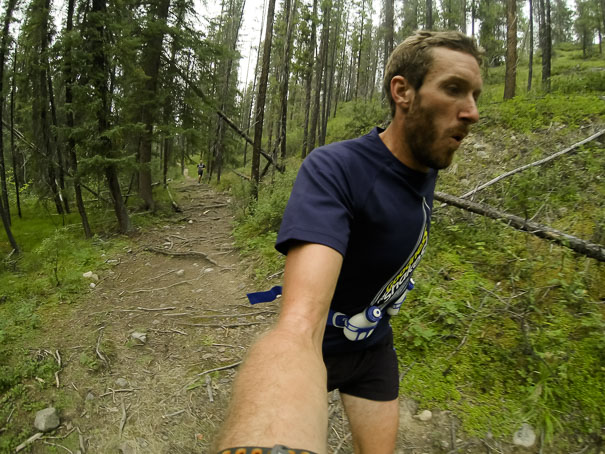 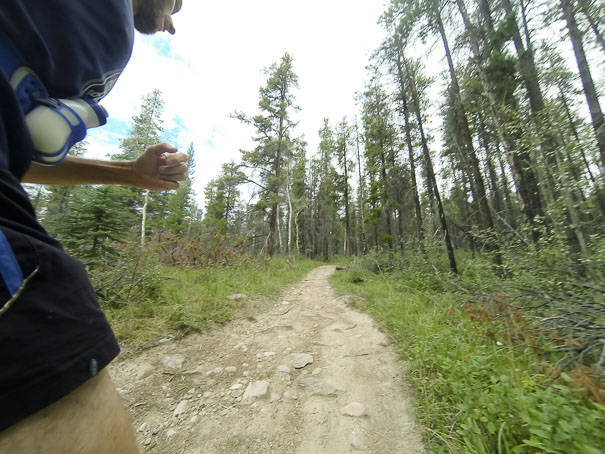 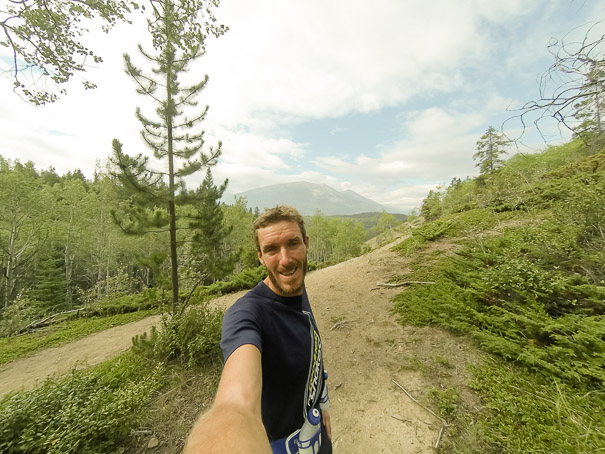 In the end we covered about 9 miles. It was hard work on the legs but good fun. Made a nice change from the mostly road running we’ve been doing lately (it’s been just over 40 miles running for me this week - which is probably the biggest weekly volumn I’ve done in about a year!). We also found a lovely little chair to relax on beside the river towards the end of the run. 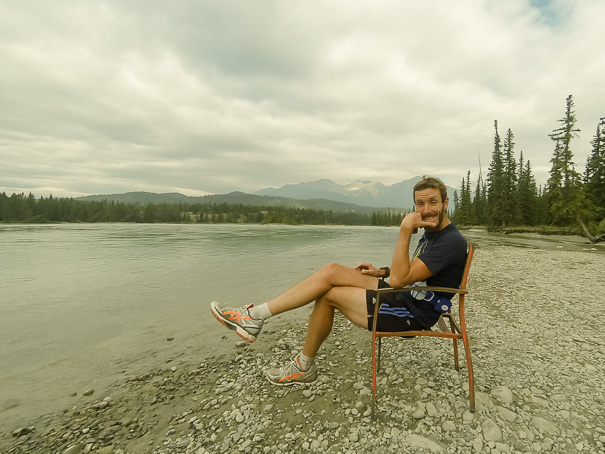 Post run a couple of us decided to head out to get our mandatory minimum 60k (37 mile) ride in and as we got our bikes ready from all corners of the hotel the Dream Team was back! I’ve no idea how it happened but Louis, Gareth, Shannon, Leah and myself rolled out for what was planned to be an easy ride.

After a little while Louis offered to show us part of the route he took on his trail run this morning. It headed in the direction of the Jasper Sky Tram (http://www.jasperskytram.com) - a cable car that takes you up 2,500m to the top of Whistlers Mountain. Louis was taking us to the base. Now when he means base, he really means up a steep climb half way up the bloody mountain. About 2.5 miles of climbing. 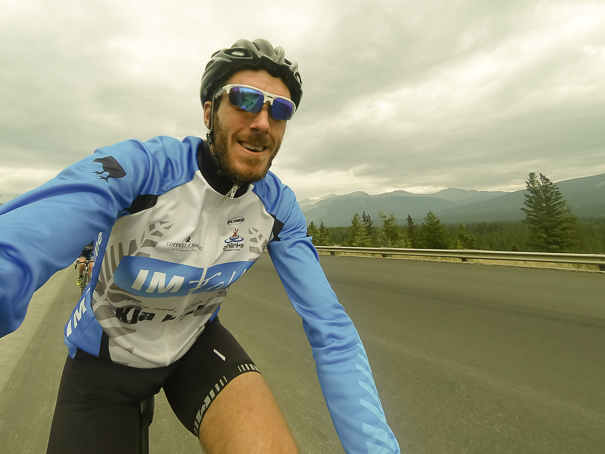 This was meant to be an easy ride and as he pedalled off into the distance the rest of us cursed and cursed for what seemed like an eternity. My legs were feeling it from the swim races this morning and the trail run, and perhaps a little from the rather abnormal exercise load that I’ve treated my body to over the past week. In fact they didn’t like the hill one bit. Louis’ name was said many times on the way up. Along with a number of swear words!

Anyway, we got to the top (well, where the cable car rides start) and he was very apologetic. We took in the view (very nice indeed) and he assured us that the descent would be wonderful. 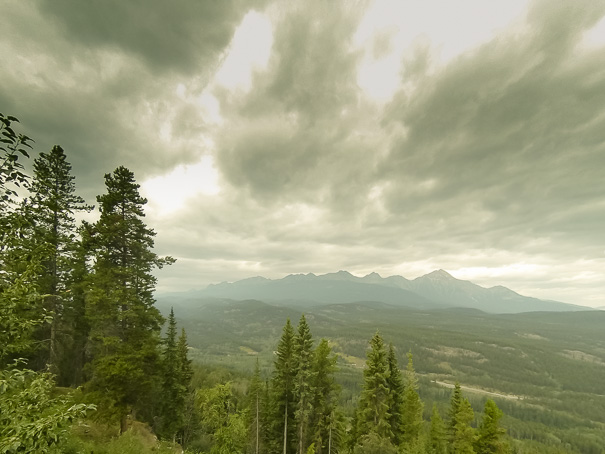 Which it was, until my bike decided to deliver me a ‘speed wobble’ at high speed. Lets just say it was not pleasant. The front wheel was going nuts, I was on the wrong side of the road and trying my best to safely slow down without coming off the bike. All sorted itself out after about 15-20 seconds and the rest of the descent was uneventful. Unfortunately I can’t say that the descent was wonderful. A bit like the ascent.

We then did what we needed to do to get the ride up to 60k. It was not pretty. My legs were not working. It’s funny, the short days are killing me and the long days are alright. I’ve no idea what that’s all about! Perhaps my intense record breaking (or perhaps not) times in the swim races has tired me out more than expected? 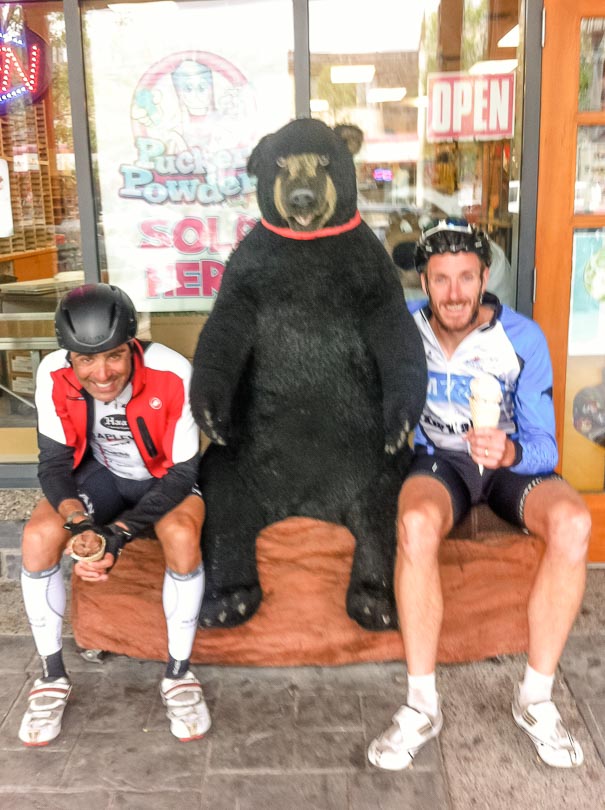 Louis, a bear, myselfEventually we found ourselves back in Jasper at an ice cream parlour. Well, if you insist.

After that it was back to the hotel/apartment and a bit of relaxing time. Gary and Adam headed off to buy some beer and after about 45 minutes came back with some non alcoholic shite (purely by accident). It was fizzy and that was about it. None of us were best impressed.

We’re now thinking about dinner as we have to fend for ourselves tonight. In eyeshot of me in the room right now as I type this are crisps, donuts, coconut macaroons and some cookies.

Oh, and some ‘de-alcoholized beer.’

Thankfully common sense prevailed so the three of us walked into town, bought a take away KFC, sat on a park bench, ate our dinner, walked back via the liquor store and then watched trash TV over a couple of beers.