Although we now live away from West London I’ve put some of the main fixtures of my ‘old’ running club in the diary… just in case.

Well, I found myself working up in ‘town’ on a gloomy Tuesday and it just so happened to be the same day as the Ranelagh Harriers Coad Cup summer handicap race. Perfect planning.

This race is just shy of five miles in the beautiful surroundings of Richmond Park. I’ve previously run it four times since 2007 and having not taken part since 2012 it was good to come back.

The plan was to have a steady mid-week run (this will be my third week in a row of doing two runs! Yup, I’m not running much at present.) and meet up with club-mates who I’d not seen in a long time. It was lovely.

Apart from the weather.

As we strolled up from the clubhouse to the starting area it got proper miserable. It was lovely and warm, but raining. Not too heavy, not too light, just annoying.

I went for a warm up run with Sharon (which I think she enjoyed - as she only complained a little!) and then hung around chatting to friends. As it’s a handicap race the slower runners go off first all the way to the fast ones about 30 minutes or so later. 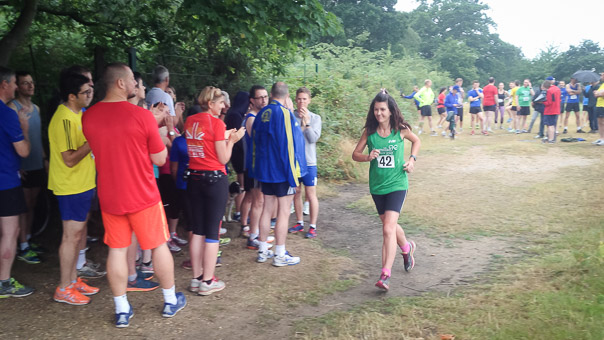 One of the earlier runners sets off as almost everyone else hides from the rain under a tree!

This is always an enjoyable time when you stand there and look at people who are set off in front of you when you surely believe they are faster runners and should be behind you. Plenty of banter was had. It helped us avoid getting depressed by the rain. 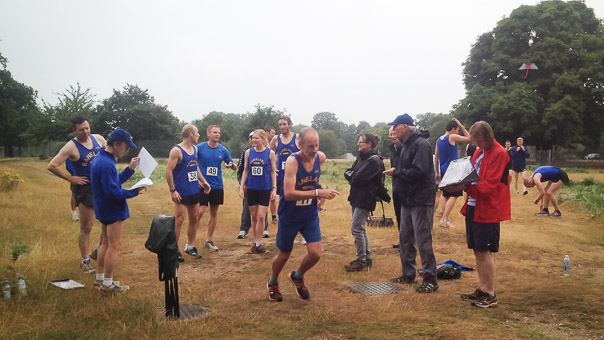 Eventually - after over 80 others had started before me I was set to go - with only 12 starting behind me. My start was 39 minutes after the first person set off.

The handicapper must surely have only been looking at older race results for me as I was royally stitched up this evening! Hmn, I’ve not done many races for a while and ignoring my steady marathons I suspect the handicapper was working off of my results from 2013 (I had a massive PB at half marathon distance and ran really well at the Wedding Day 7k amongst others that year) when he worked out my starting position for tonight. Oh dear… 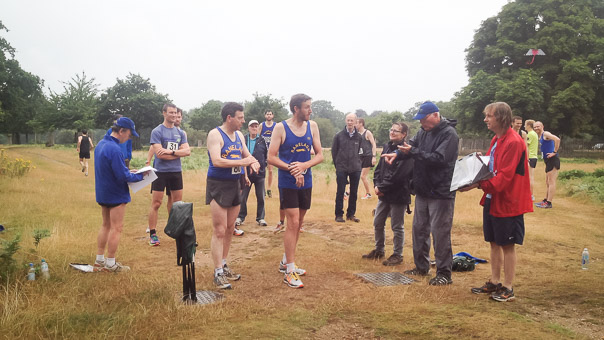 Within the first half mile I’d been overtaken and had ran into a low hanging (not any more) tree branch. I heard this almighty ‘crack’. Oops. Thankfully there was only a tiny bit of blood on my forehead. Nothing that would put a halt to the proceedings.

The normal game of follow-my-leader and then make your move towards the end turned into a case of listening to footsteps and then watching as much faster runners come past me. It wasn’t a problem. I was there to have a solid run, enjoy myself and the scenery all around. It is not a race for winning. At least not for me! Definitely not tonight. 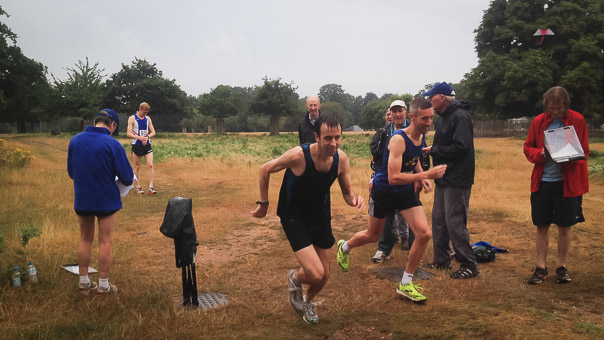 The fast boys. Phil and Ted starting with Ralph getting ready to start 10 seconds later

The rain had eased off and it was just warm and humid. The park looked lovely and this is one of the things I miss from not living nearby. Where we are now we have the beautiful seaside and promenade to run on, but we don’t have Richmond Park on our doorstep.

Back to the run. It was uneventful and lonely for most of it. Although the main junction points were marked I was glad I knew the route. I did actually overtake a few runners towards the end but was firmly close to the back. So much so that one of the marshalls made a comment about me running not quite to the handicappers expectations! You’re not wrong there. 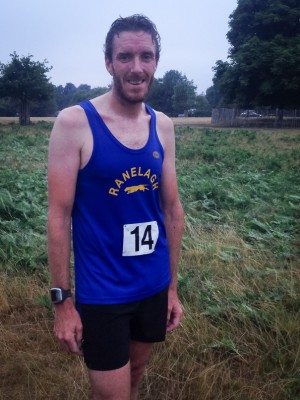 I came round the final corner, felt strong(ish) and finished in a time of 34:48. This was the 29th fastest time on the night so I’m not complaining at that. In the actual handicap race I finished 64th. This only takes into account people with ‘proper’ handicap times from having run a number of club races. If everyone was included then I was 84th. I prefer 64th. Actually I think I prefer 29th so I’ll go with that! I ran at around seven minutes per mile pace.

Being honest about it I felt like I had a good run. I did and I was happy with how I ran. I’m still flogging the “I’ve hardly trained” line and will continue to do so for a good few more weeks!

My fastest time on the course was in 2011 when I ran 31:04. This was (and still is) my best ever performance for the running club. Maybe I’ll get back there. Maybe I won’t.

To be honest it doesn’t really matter. As long as I enjoy what I do that’s all what counts.

And this year I did.