People who know me know that I don’t race much. This year my race calendar has been rather empty. I did a 10k run in May, a 3.8k (river current assisted) swim in June and a club cross country race in July. I’m a regular 5k parkrunner with close to 350 runs to my name but I treat them as steady runs with cake at the finish.

Hmn, but David - you do triathlons… which ones have you done this year?

Well… I’ve done one now and I think I can say that my triathlon season has begun! I’m a member of the Bognor Triathlon & Endurance Sports Club (you’d never have guessed as in the past year I’ve not quite made it to a single training session! I must do something about it.) and this year they’ve upped their game by organising a new triathlon event - the Bognor Regis Triathlon.

The best thing about it… it’s only a mile from where we live.

This is a new event and had three different distances racing at the same time - a super sprint, sprint and standard distance race. The standard race is an 800m pool swim, a 37km bike and 10km run. So ‘almost’ standard distance. That’ll do.

I signed up to the race a few weeks ago and promptly got myself injured again. This time I thought I’d broken my toe windsurfing. A black and blue toe which was painful to walk on meant just over two weeks of no running whatsoever. I went for a little run a few days before the race and my legs were killing me for the next 48 hours. I was not run-fit!

Anyway, I’ll probably bunch up all my excuses and injury stories for another blog post. I’ve got plenty to share.

This past weekend we had visitors staying for a few days. Jo and Matt are on a three month road-trip of Europe (they live in Australia) and after racing at Challenge Roth (an Ironman distance race in Germany) a few weeks ago found themselves at our house for a few days. I met Jo in Hawaii in 2013 and we’ve stayed in touch ever since. 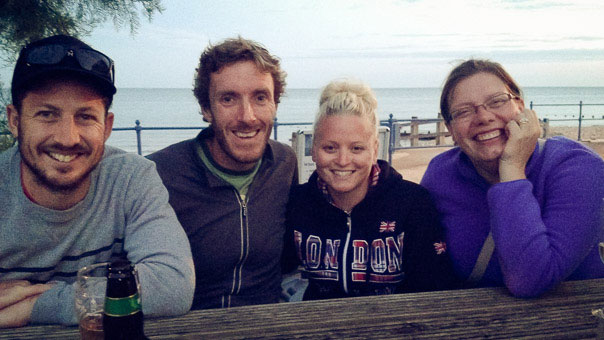 They arrived on Thursday and I told them about the race I was doing on Sunday and that if they were around they might want to watch it.

Not long after I found Matt on his laptop entering the race! Nice one.

As part of the entry process you have to estimate a swim time for 400m. I asked what he’d put down. He said he looked up my time and thought he’d put that down.

I could see where this was heading…

Now that we were signed up for this UK/Australia smackdown I felt it only fair to do a recce of the bike course on Friday. The weather was beautiful and we enjoyed a good spin round a lap of the course.

On Saturday evening things got serious. I offered Matt a beer. He gave me that ‘are you trying to scupper my race’ look. I had a beer myself and we were evens… We then had another beer.

For the rest of the evening we matched each other when it came to food and drink. Neither of us seemed to do anything different to the other. This was it… David 1. Matt 1.

I’ve been injured on and off for months. Matt has done no swimming since Roth and been eating and drinking his way round Europe for the past few weeks. David 0. Matt 0.

Sunday morning we were up at about 5am for a little breakfast and to get ourselves ready to set off. It was incredibly misty out and we hoped that the sun would burn through before too long. 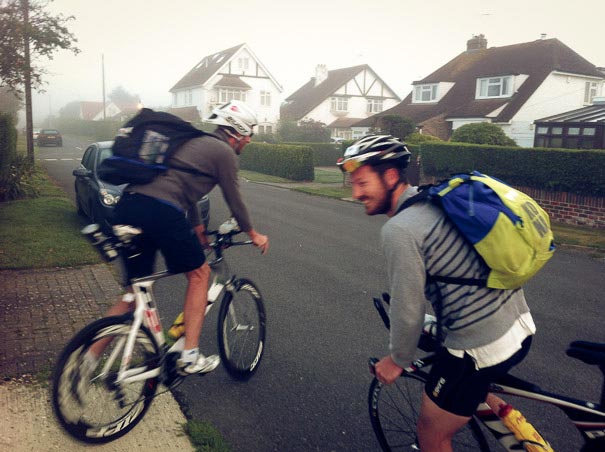 Leaving home and heading to the race

I made up some sports drink (only two years out of date) for us to enjoy on the bike. We had the same. David 1. Matt 1.

As I was about to lock the front door I noticed Matt had an energy gel with him. A vanilla ‘Gu’ gel. Right, back inside I went and found one of the exact flavour in my box of (out of date) energy gels.

I guess I had an advantage that my bike was fully race ready - I had the race wheels on and even got my fancy pointy-helmet out of its box. The last time the bike was like this was at Ironman Wales in September - the last triathlon that I had taken part in.

Matt was on a fancy Cervelo P5 bike with electronic shifting. Very slick. He didn’t have fancy wheels (just training wheels) and a normal cycle helmet.

About half a mile from home I went over a bump in the road and my water bottle decided to separate from its lid and promptly spill an entire bottle of sticky sports drink all over the front of my bike and wheel. Great. Thankfully we had some extra sports drink between us both so divvied it up evenly between us.

In transition my bike would probably be the one covered in wasps!

In order to make things fair again between us it was pointed out that I’m 42 years old and he’s 31. 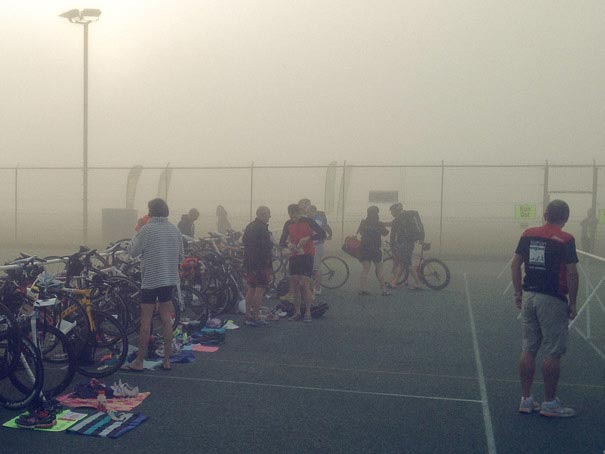 We got to the leisure centre, got numbered up, racked and ready for the race. We all start at 30 second intervals and I think a few people put down the same estimated 400m swim time (6 minutes 40) as Matt started a few places behind me. 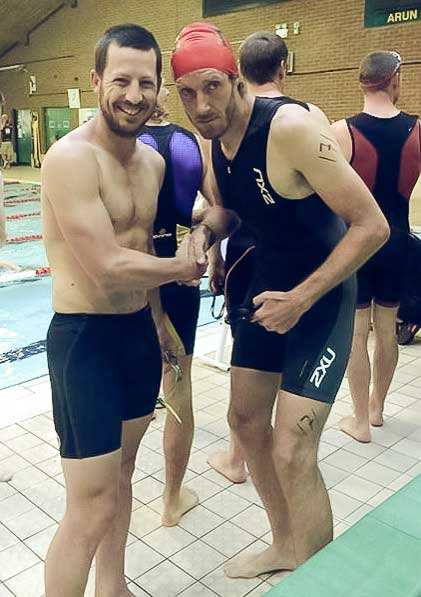 One taking it seriously. One not so much. I just don’t know which is which.

I jumped in the pool a little after 7am and that was it - game on. An up/down/under-the-ropes/up/down… swim for 400m. Then you get out of the pool, walk (not run) back to the start and do it again.

It worked really well. There was no ‘swim carnage’ for me (I overtook just the one person) and it was uneventful for me. That’s how I like it.

As I headed out of the pool towards transition I saw my watch say about 14 minutes. That’ll do. The sun was shining and the sky was clear and blue with very little wind. Conditions were ideal.

Before long I was out on the bike. It’s a flat course, a few roundabouts, a few traffic lights (which were all green apart from one that I had to slow down for before it changed back to green). You ride out to a section that you do twice. At the start of this first ‘lap’ I got overtaken by a couple of super quick chaps. Right… head down and stick with them.

Drafting is not allowed in the race and you have to keep at least 7m apart. The three of us kept a distance apart and pushed ourselves for the next 45 minutes or so. It was fast, it was fun, it wasn’t easy. We changed positions a bit during the ride and made sure there was no cheating going on. It was fun. 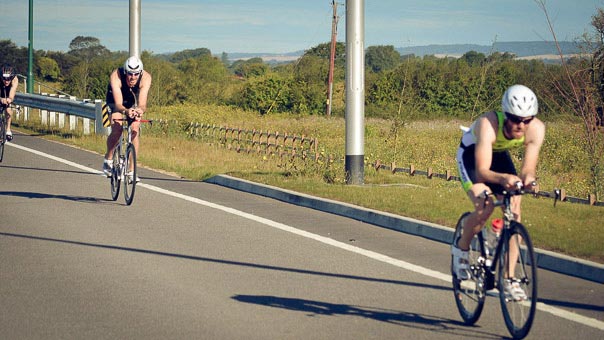 David (left) having fun on the bike. Photo: Chris Jones

There’s a little out and back part of the bike course a couple of miles from the end and I caught glimpse of Matt. Apparently he’d seen me early on but I drifted off out of sight.

Back into transition and I was feeling good. My official bike time (which includes both swim-to-bike and bike-to-run transitions) was 58:09. Matt’s time was 59:46. 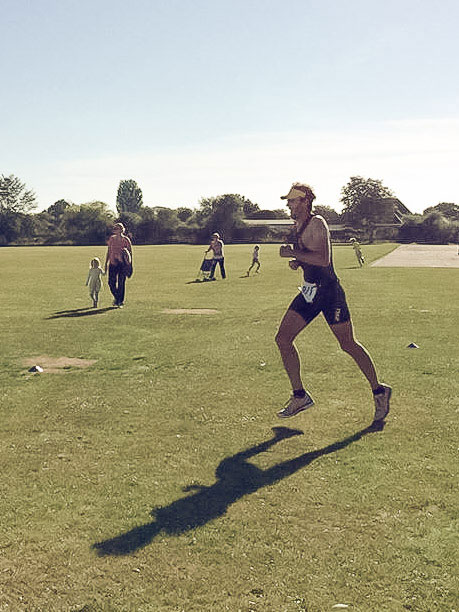 OK, onto the run. It’s a four lap affair with some on trails around some scrubland and the rest on road/footpaths. The multiple laps worked really well (apart from a narrow footpath which meant you got stung by nettles if you overtook anyone!) as the main support was all based around a central area so you got lots of cheers every 10 minutes or so. Out on the course there were a few marshalls and as many of them are from the local parkrun they were familiar faces which made the encouragement even better.

The run was hard work. I’d not run 10k (in training or otherwise) for at about a month and with two of those weeks not having run a single step this meant it wouldn’t be easy. I managed to push myself round the 10k route in 44:26.

So, how did the final scores on the doors work out then? My overall time was 1 hour 56 minutes and 28 seconds (fifth overall). Matt finished in 1:56:38 (sixth overall).

Wow. I didn’t expect it to be so close between us. In fact positions 3, 4, 5 and 6 were only separated by 35 seconds. Whatever the times I managed to show that youngster a clean pair of heels! 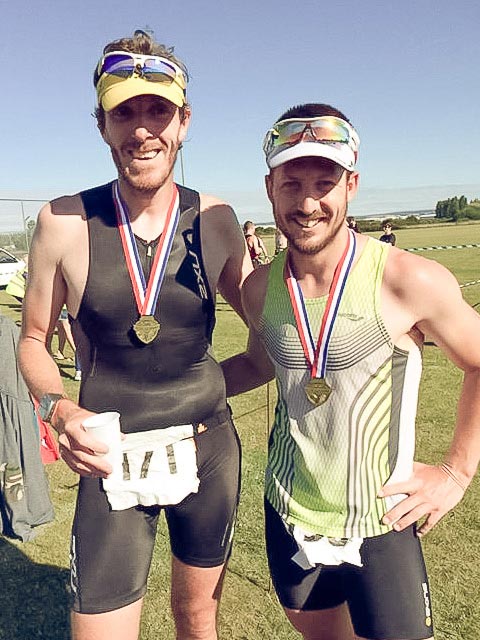 We watched the rest of the competitors come in to finish and then watched the prize giving, which was very well attended. In my opinion the organisation of the event was superb and I couldn’t fault it. Word of this fun new race on the local calendar will no doubt start to spread so I’d expect entrant numbers to increase a good bit next year.

We took it easy for the rest of the day and over lunch I mentioned that I took my energy gel at the end of the first lap of the run. I then asked Matt when he had his.

“Oh, I had two gels. And took them both during the bike leg.”

What! He had a sneaky additional gel!!! No wonder he was 10 seconds slower than me.

It was an amazing weekend with our antipodean friends and the weather couldn’t have been any better. See… us brits just love to mention the weather.