So it turns out that the condo block we’re at is an athlete’s paradise - and I don’t just mean because I’m staying here. I found out yesterday that UK pro’s Lucy Gossage and Joe Skipper both have condo units here for the race (as well as Rob H. who I mentioned yesterday) so it’s really nice to know some sporty folk are around here.

So this morning at 7am Lucy, Joe and Charlie met up at the pier for a swim. I joined them too - for the first 20 seconds. I then I had to enjoy the company of fish swimming around instead. I’m really swim un-fit at present and I’m going to try and get a swim in almost daily for the next week or so to give me chance to get out of the water on race day feeling reasonable enough to knock out 112 miles on the bike (and a little jog after that). 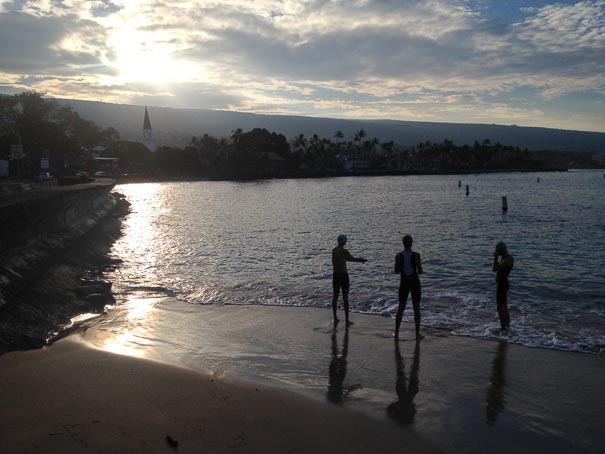 So the fast boys (and girl) swam the full Ironman course (2.4 miles) and I trailed in a few minutes afterwards after swimming a fair bit less. We followed the swim with a lovely drink and a natter at a coffee place a few minutes walk away with a gorgeous view over the ocean. 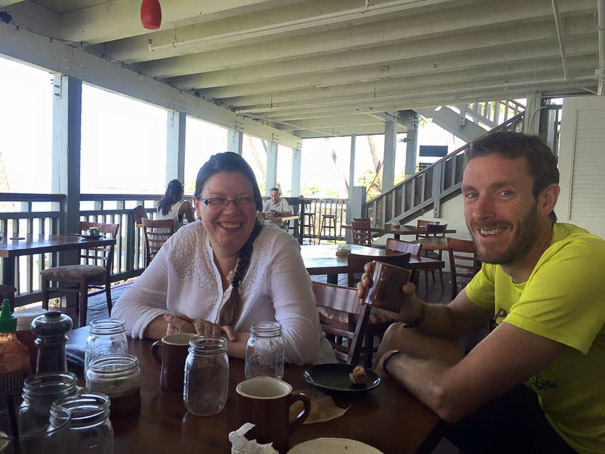 After getting back to the condo (at about 10am) I had some breakfast and thought about getting on the bike to do something a little more substantial today. The plan was for me to head about 55 miles towards where the bike turnaround on race day is - a little town called Hawi. The plan was for Sharon to then drive up in the car, we’d then have a lovely bite to eat in a café and then head back to Kona as I had plans for early evening.

Well - it didn’t quite work exactly to plan. After about 12 miles on the bike - following the Queen Ka’ahumanu Highway (or Queen K as it’s fondly known) the road turns slightly and at this point the fun and games began. Oh my f**king god there was a headwind - nothing new there - but not any old headwind, a flipping gale! It was blowing its socks off. I’d planned to stop to refill my bottles at Kawaihae - which was unfortunately in pretty much a straight line into the headwind - about 25 miles away! So I just continued pedalling.

I thought I read in the paper yesterday that the trade winds were weaker this year. Not today that’s for sure.

I caught up with an older chap riding the same direction wearing cycling kit with Kailua-Kona written all over it. He said he was a local and has lived here for years and not seen a ‘wind storm’ like this in a long time.

It was crazy. Did I say I’ve never ridden in anything like this before? Well, it was windy. It also wasn’t consistent - it moved around a bit and the gusts were intense. Back in 2013 I had a couple of windy days on the bike but today just knocked those out of the ball park (see, do I sound American yet?). It was interesting to see some of the pro athletes racing here mention the winds once they’d done their training for the day: 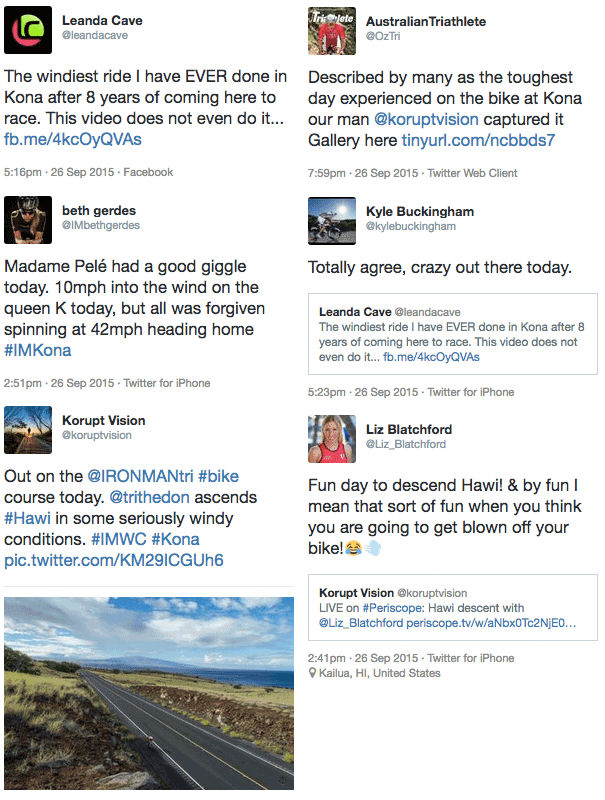 Oh, and it boiling hot again today - just under 90 degrees. 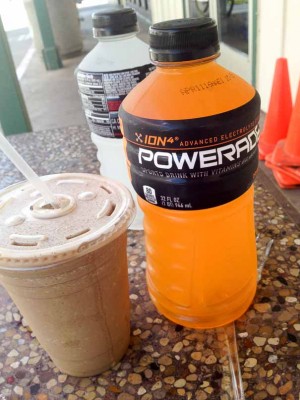 Once I rolled into Kawaihae I stopped off at the garage to get a drinks refill. In addition to just under a couple of litres of sports drink I poured myself a lovely coffee-mocha type iced slushy drink. It was lurvely but took ages to drink.

Once back on the road I knew I had about an hour’s gentle climbing to get to Hawi - about 18 miles away.

Two miles up the road and I start feeling the bumps in the road. That can only mean one thing.

I’ve not had a puncture on my ‘posh’ race wheels since I bought them just over four years ago. I took plenty of care, found a problem with the old valve extender being used and then realised that I’d not put any gas canisters in my bike toolbox (as I don’t put any in the bike bag during the flight over). Great - this meant that I had to pump the tyre up with the smallest bike pump known to man. 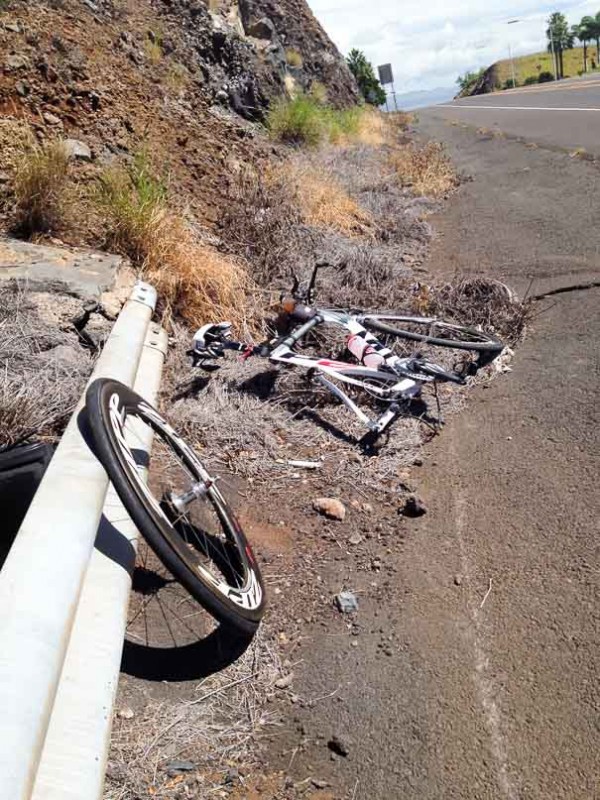 I got myself fixed up and headed off. After about half an hour or so I saw a sign that said seven miles to Hawi. I pulled in and send Sharon a text message with an update. Just as I pressed send I saw her pull up in the car behind me.

Because of the delays caused by the headwinds, puncture and the never ending slushy drink I said we wouldn’t have time for a nice lunch so we’ll do that another day.

I set her off on her way and said I’d be with her in about 25 minutes or so. 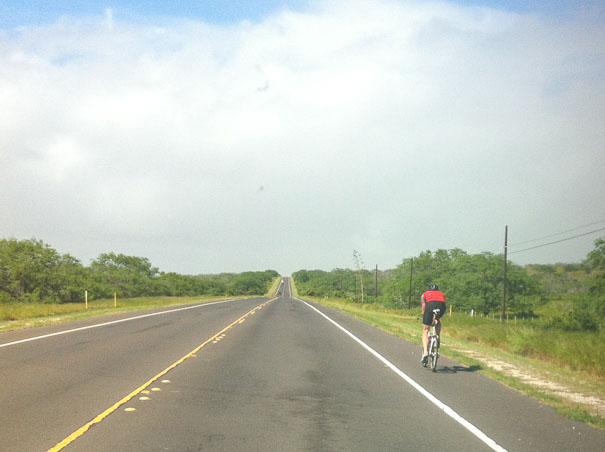 Just as she headed off into the distance and I set off the rain began (you can see the clouds in the photo). The winds were still ridiculously fierce and were mostly side-winds at this point. The rain really got quite heavy which rather than being unpleasant was actually fairly cooling. It was however making my poor bike filthy.

As I got to Hawi I saw the car and pulled over. Sharon was browsing a couple of the local shops and I ended up chatting to a couple of people on holiday, er, vacation. They’d been blown about in their car and couldn’t believe there were people out cycling.

The ride was 54.3 miles of cycling and took 3 hours 16 of pedalling (excluding stops). It was a slow old ride but all character building stuff for sure.

After a few minutes we put the bike in the back of the car and headed back towards Kona. Within minutes the rain clouds covering the mountain had passed behind us and we were back in sunshine and rising temperatures. 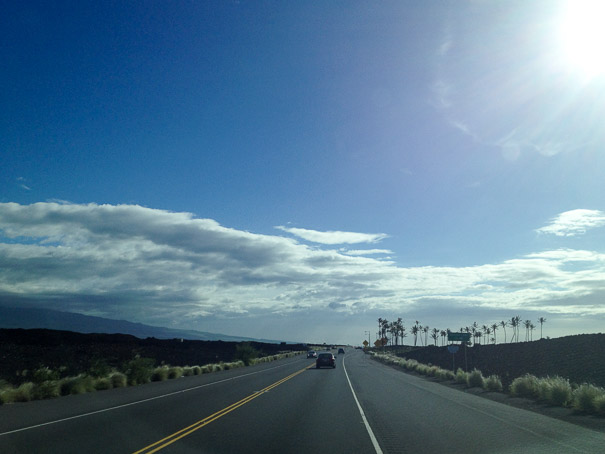 We got home at about 16:45 and after a lightning fast shower we were back in the car and heading down Ali’i Drive to the Keauhou Shopping Centre.

You see, once a month there is a free music concert in aid of the ‘Hawaii Island Food Basket’ - entry to the concert is at least two tins of food. We brought a few tins with us and in we went. When I say ‘in’ - I mean the stage was setup in the middle of the car park (or should I say parking lot) at the shopping centre. There was a stage and seats were laid out. There were probably a couple of hundred people there. 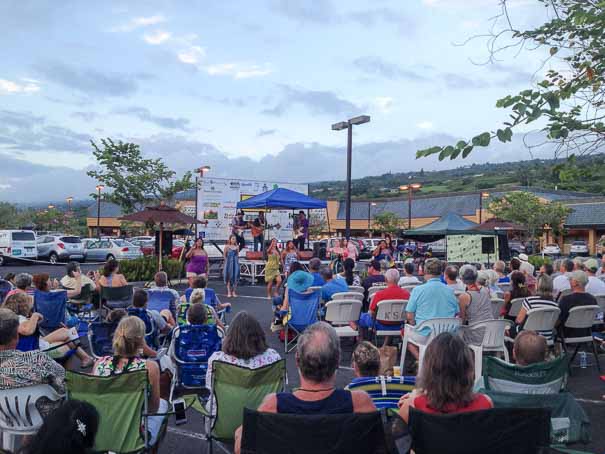 I’ve heard about these concerts from the regular adverts on Kapa radio over the past couple of years and had this one in the diary for a few weeks now.

After handing our tins of food over at the entrance my eyes locked with a young lady wearing a crown. Oh yeah baby, it was Miss Hawaii 2015 - Miss Janae Kapela! Yup, I knew she was going to be here as well from an interview on the radio the other day. She came over to me and asked me for a photo (well, that’s my version of events and I’m sticking with it!!). 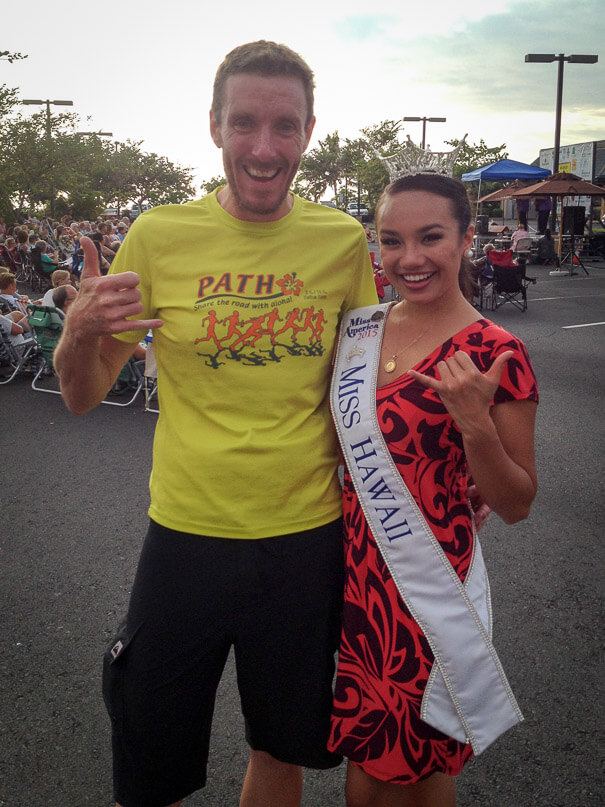 Following the excitement of this - I believe Sharon’s words to me were along the lines of ‘oh do calm down!’ we headed off and found some seats.

The main act was a Grammy award winning artist John Cruz who was accompanied by father and son guitarists Mele’uhane. The music was wonderful, a group of dancers from a hula halau (hula school) entertained, the crowd were very appreciative and we really enjoyed a little non-ironman craziness. The music started at 5pm and went on until 6:30pm as it got dark.

We then headed home, cooked up some dinner, had a beer and I played catch up on the blog for a while. I’m getting there…

Today was a good day.