From past experience we knew we’d be awake at silly o’clock and after a grand total of about two hours sleep in the past 36 hours I was awake at about 3:30. So what did I do… yes, write the blog for day 1 whilst sat outside listening to the waves crashing against the rocks in the dark.

As the sun rose we were treated to the beautiful view from our lanai. This is what it was like at quarter past six this morning. 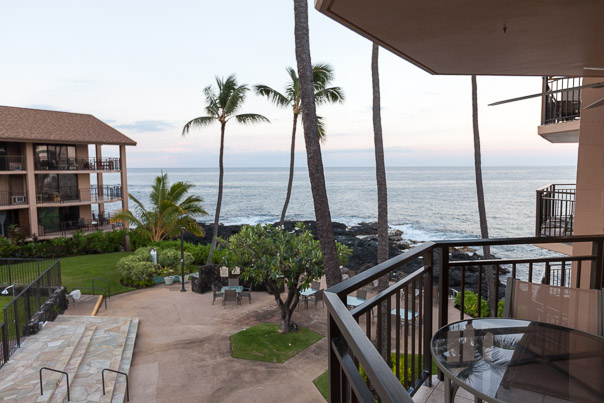 As we all know, all good days start with a swim (!!) so we jumped in the car (I’ll call it a car from now on in but quite frankly it’s a little bigger than our Ford Fiesta back home) and headed the mile or so to park by the pier. 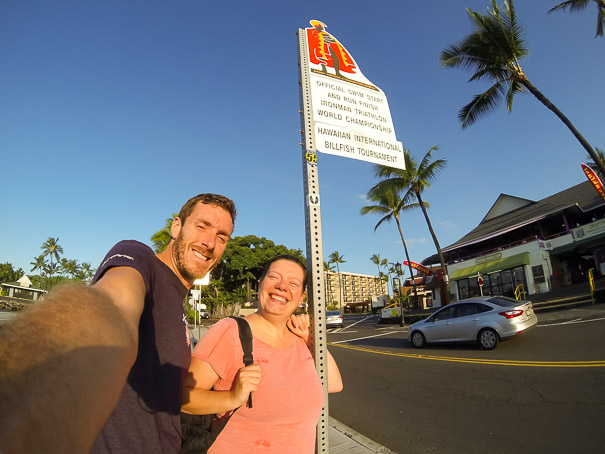 We’re back! For the Hawaiian International Billfish Tournament of course!

My first professional athlete sighting was within the first minute of being on Ali’. Michelle Vesterby (who I ‘showered’ with in 2013) from Denmark was out running early. I can’t believe she didn’t remember me. OK, the fact that she doesn’t know who the heck I am and the fact I was in the car probably explains this. She’s easy to spot - always smiling.

We got to the pier and the site was as impressive as ever. Well… the pier isn’t very impressive. It’s not like the pier back home in Bognor Regis with a nightclub, chip shop and amusement arcade. It was just fairly barren with a few locals fishing round the edge. It will look a little more impressive on race day in just over two weeks time. 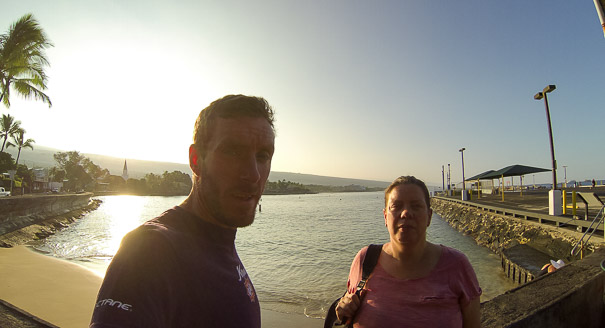 People often talk about the pier in Kailua-Kona or the beach - a tiny stretch of sand that is known as ‘Dig Me’ beach - because those fit Ironman folk stand there and say (or at least think to themselves)… ‘Dig Me!’

I had a little swim, nothing spectacular (to be fair, my swims are rarely that) and the ocean was lovely and warm. The view as the sun rose over a clear blue sky was awesome. This is a great place. 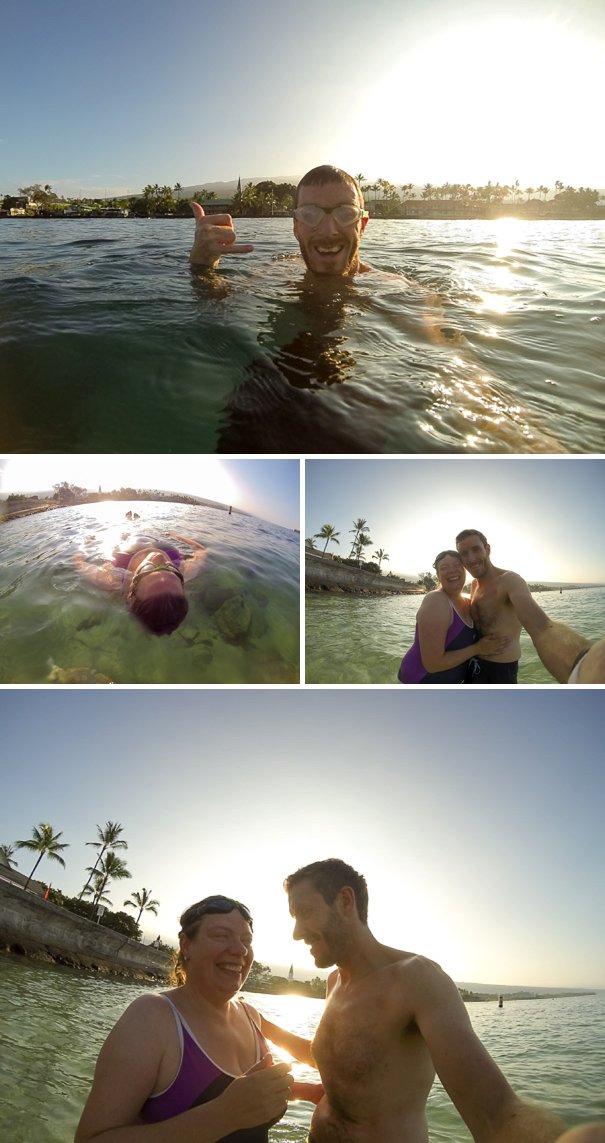 Post swim I showered off at the outdoor open air shower and unlike my encounter two years ago in the shower with Michelle I think I arrived on ‘female shave day’ - two ladies there getting down and dirty - one of them rather intimate - with a razor blade!!!

Sensibly we didn’t hang around for long and then took a stroll into town to Island Lava Java - a coffee shop/restaurant with an amazing view that is lovely to visit a couple of weeks or more before race day. Over the coming days it’ll get much busier and then it’ll be nuts for about a week before the race - it’s really not the same then. Anyway, a first breakfast of pancakes and the largest cup of coffee that I think I’ve ever drunk - 100% Kona coffee of course. 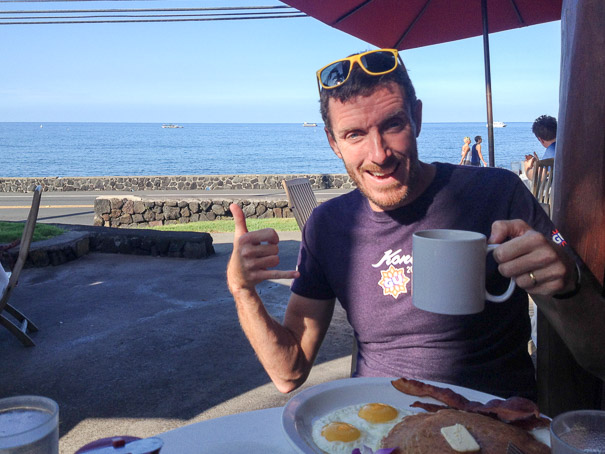 We then popped into a couple of local shops and next thing Sharon had bought a new dress and I’d got us a couple of tacky fridge magnets. 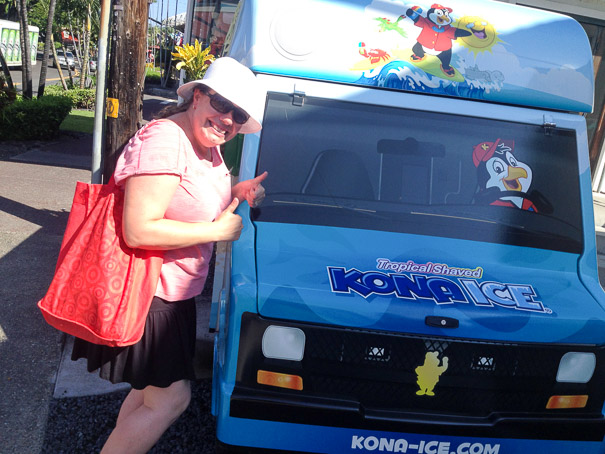 On the way back I made Sharon take a detour (I like that she’s the only one insured on the hire car - it’s like having a personal chauffeur). I needed to stop by the studios ofKapa Radio- a station that broadcasts on the Big Island of Hawaii. Unfortunately this wasn’t for an interview about this website - I just wanted to pick up a free sticker! You see, when we were here in 2013 we listened to the soothing sounds of Hawaiian radio every day. Apparently there was a TV in the condo but it never got turned on.

When we returned to England we missed the place so much that we hooked up with the online stream of the station - so everything was good again. We then moved to the seaside - even better. Anyway, I collected a sticker from a nice chap in reception and shaka’d at the lady presenter of the morning show through the window outside!

Anyway, enough of this nonsense -especially as they didn’t want to interview me on air! Shocking - I know.

Back ‘home’ to dump the wet swim gear off and then we off on the road again - first stop was to see Amy - the lady who runs the local florist shop. She was good to us two years ago and we popped in to say hello and to place a little order (for Sharon, not me) for some pre-race flowers.

Then it was off to Sharon’s favourite shop - Costco. As we’re here for three weeks it’s worth stocking up good and proper. I went straight for a box of Kona Brewing Company Longboard lager and then for a gallon of chocolate milk - to remind me of Epic Camp in Canada last year (see, I even wore the Epic Camp cap as well!). 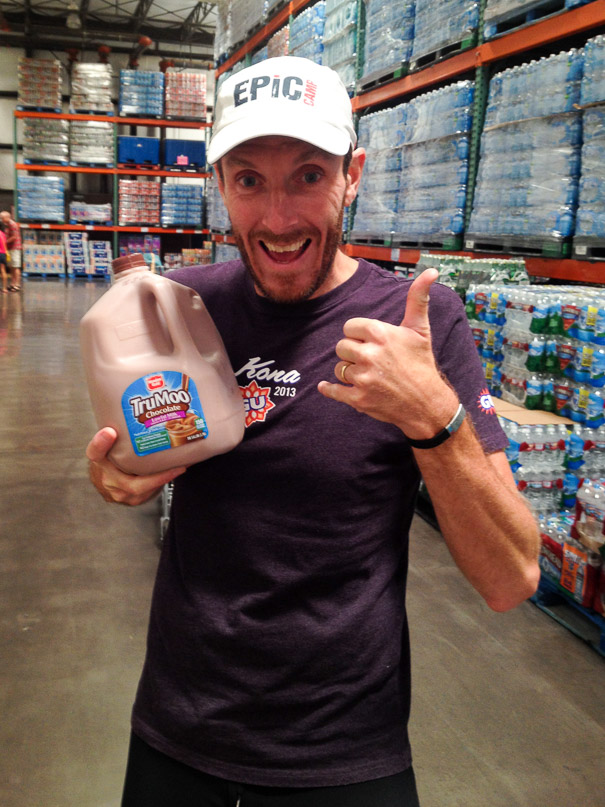 Back home for a late lunch and then after putting my bike back together I went out for a little spin - taking in a little bit of the Ironman course and then a rather horrible 3.5 mile climb (averaging around 6.3%) which ensured I was (un)comfortably soaking with sweat.

You see, it’s been rather warm here this summer. According to the West Hawaii Today newspaper El Nino is effecting the area pretty well at present. “Hawaii has already been feeling the effects, with increased sea temperatures contributing to stifling heat waves. Sea temperatures are around three degrees above normal.” Apparently the trade winds are weaker this summer which must be a good thing as part of the bike course is notorious for strong winds.

It was like a hairdryer was blowing into my face the whole time. I’ve never ridden in anything quite like it. As someone once said…

“It’s hot. Damn hot! Real hot! Hottest things is my shorts. I could cook things in it. A little crockpot cooking.” Well, can you tell me what it feels like. “Fool, it’s hot! I told you again! Were you born on the sun? It’s damn hot!”

Whilst I was out trying to rapidly get fit with a little over two weeks to go Sharon was in charge of the social diary and arranged to meet up with Charlie P. - a chap we met at Ironman Wales last year when I qualified for this race. Charlie won his age group in Wales and was 7th overall. He’s pretty darn fast. And a nice chap at that.

So, post bike ride and following a very quick shower I was out of the door and we met up for dinner and a beer.

Oh, and just as we were leaving the condo car park we bumped into Rob Hill - he was one of the people at Epic Camp in Canada last year and he’s a proper Kona veteran - he’s raced here a number of times as a repeat qualifier - not surprising really as a few months ago he won the Ironman Asia Pacific championships for his age group. He’s staying in the same condo complex as us which is really nice to know. Post dinner (it was a fairly early one) we returned home, I started to write this blog on my laptop and promptly fell asleep at about 8pm. That was it for the day and I gave up for the night.