The last few days we’ve been keeping an eye on the weather forecasts and tropical storm advisories - there was a storm heading in the direction of Hawaii but as of Sunday morning the tropical storm watch from the hurricane centre in Honolulu has been discontinued as the storm is headed away from the big island. There is a strong chance of heavy rain tonight but apart from that it seems like we’re safe from the storm so that’s a good thing.

Today turned into a bit of a quieter one. Once again we headed to the pier for a morning swim. I wanted to get down there to watch the start of the Pre-Ironman Triathlon Challenge race that has been held since 1992. This is a 1.2 mile swim, 15 mile bike and 6 mile run organised by one of the local triathlon clubs. 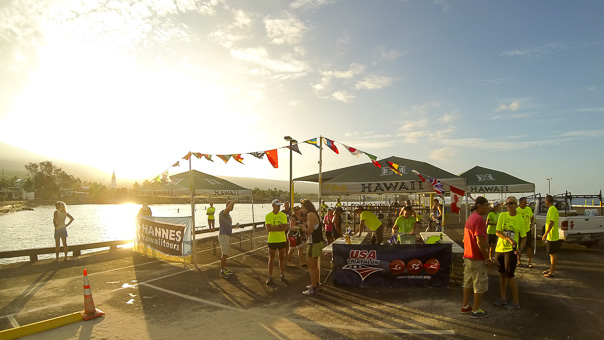 I had thought about entering the race a few weeks ago and had the entry form printed out long before we set off for Kona but decided against it a few days ago - with my track record recently of falling off of my bike I felt that racing through the streets of Kailua-Kona on open roads was asking for trouble. Instead we’d do the more leisurely thing and show support.

Arriving at the pier we saw Martin Muldoon - an Irish chap who seems to stamp his Kona ticket year in, year out. We saw him and his wife here a couple of years ago and it was nice to see them again. He was doing the race as a little bit of race practice as he’s had a pretty tough few months after being knocked off of his bike. Thankfully he’s been able to recover in time to make it to the race - I know of at least two UK people who qualified for the Ironman but won’t be here for the race after recent cycling accidents. I’m grateful that I’m here following my little incident a few weeks ago.

The event is low key - really low key and about 15 people started the race this morning. The rules also allow swim fins and wetsuits to make it more accessible. 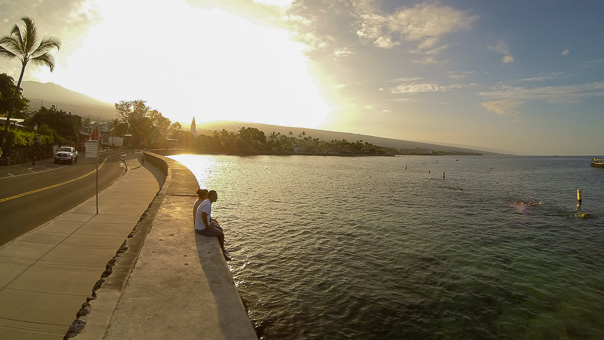 On Ironman race day the Kailua-Kona sea wall will probably be a little busier!

Once they set off I headed down to the water for a swim whilst Sharon went for a little run along Ali’i Drive. 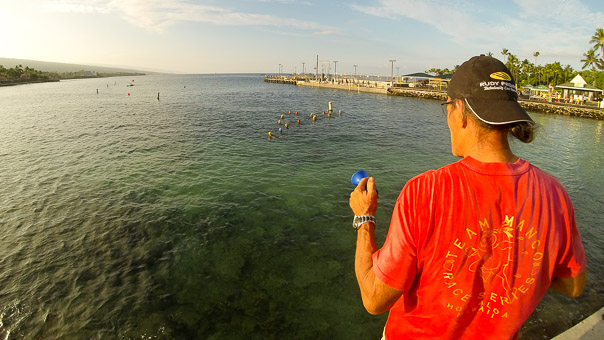 Ready for the start of the race

With my GoPro camera stuffed down the front of my shorts I thought this might encourage some sea life (i.e., dolphins and turtles) to make an appearance but unfortunately it was not to be! Instead I took some photos of a couple of the swim buoys that are permanently anchored out here. There’s a few more out there in addition to what I’ve shown here. 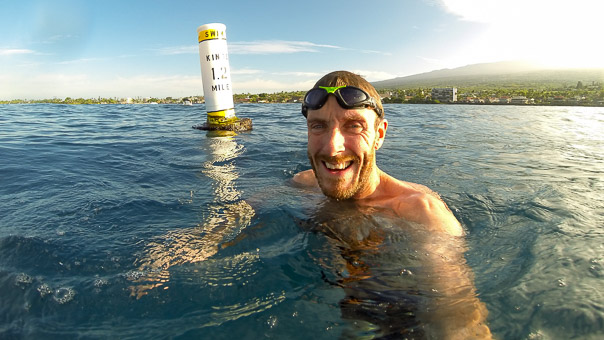 They’re easy to spot (if you know what you’re looking for!) and have handy distance markers on them - for example, the 1.2 mile swim buoy (the ‘Kings’ buoy -I’m not sure why it’s called that but that’s what it says on it) means that you’re 0.6 miles from the beach and that once you turn around and swim back you’ll have swum 1.2 miles. As my Garmin GPS is terrible at tracking open water swimming (the model I have was never meant to be any good at this) it’s nice to get an accurate idea of how slow you really are! 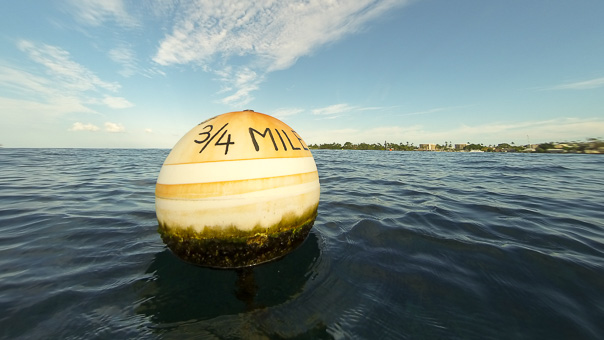 Can you guess what this one means? 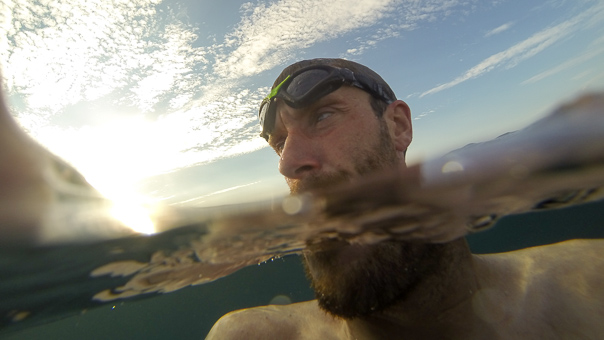 Post swim I found Sharon tucked in a shady spot trying to recover from a rather warm run. We got ourselves together, and headed back home for a leisurely breakfast. We saw 2012 Ironman World Champion Leanda Cave out running along Ali’i Drive. That’s at least one celebrity spot each day now. Will this continue…?

Shortly after 10am I headed out for a run of my own. As I’d managed to get a couple of runs in back home in some lightweight shoes I bought after squelching my way round 26.2 miles in soaking wet shoes I’ve almost decided to wear them on race day. I thought with the temperature knocking on the door of 90 degrees (again) I’d give them a little test and see how they fare.

After fighting with my Garmin to get it to turn on (a full factory reset did the trick) I headed off down Ali’i - which is some of the early miles of the marathon part of the Ironman.

As it was Sunday morning one of the local churches right by the ocean was holding its service outdoors. It looked very impressive.

I kept on trotting along the road with a bottle of sports drink - we bought a huge case of Gatorade a few days ago as this is what you get handed out on race day so I’m trying to get used to it. To be fair I can stomach pretty much anything so it’s not normally a problem but I thought I’d at least try and get used to it beforehand.

Within a few minutes the bottle was warm and that was all I had to help cool me down. It was baking out there.

I ran just under 3.75 miles down to the end of the road (well, the bit where it heads inland from the ocean) turned around and then ran back towards home stopping at Magic Sands Beach.

Although it looked beautiful and the beach was busy I decided not to go swimming but instead turned on one of the beachside showers and stuck my head under it for a few seconds. Bliss.

Back on my way and I headed back home to tick off 7.5 miles.

When I got home I was spent. Completely. I’m so glad I don’t have to race the Ironman as fast as I can in a couple of weeks as in these conditions it’s going to be carnage out there on the Queen K during the latter half of the marathon. I fully plan and expect to take it steady, keep cool (the shoes were great by the way) and just get to the finish. 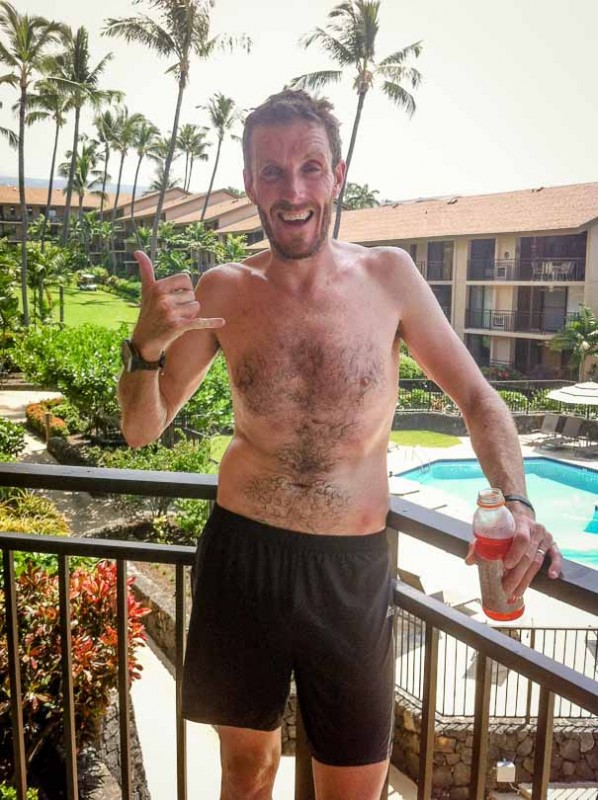 Post run. Don’t worry - my top half was covered during the run.

Before I left England my last run was 5 miles at just quicker than 7 minutes 30 per mile. My heart rate averaged 146bpm.

Today I ran 7.5 miles at 8 minutes per mile. My heart rate averaged 155. Actually for much of the run it was in the mid 160’s - it just started off lower and took a little while to rise. Then it just got higher and higher.

The last thing I want is to not get to the finishing line on October 10th. Much like in 2013 I just need to ‘get that medal’. 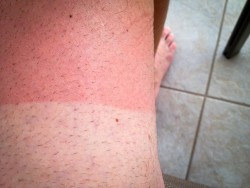 After making the king of all smoothies I had a quick dip in the swimming pool - fell asleep on a sun-lounger (and ‘caught’ the sun) and then made it back inside for a snooze and some lunch.

This afternoon I just sat outside, wearing very little and happily sweating away to myself. Sharon is tucked away inside beneath the ceiling fan and I assume is fast asleep as I’ve sensed no movement for a couple of hours or so. She got bitten by something a couple of evenings ago and is currently sporting a monster bite on her shin and having a nasty reaction to it :(

The cloud cover is slowly filling over from the mountains but no sign of rain. Yet.