Today I swum three times. It wasn’t proper swimming but I made it into the ocean on three separate occasions. If I get points for familiarisation with the ocean then I’m onto a winner.

Let me tell you about today…

After a busy day on the bike yesterday it was time to give the legs a little bit of a rest and use my skinny little arms some more. My right shoulder hasn’t felt perfect the last few days but I’m getting bored of making excuses and time is running out so it was time to man up and do some swimming. 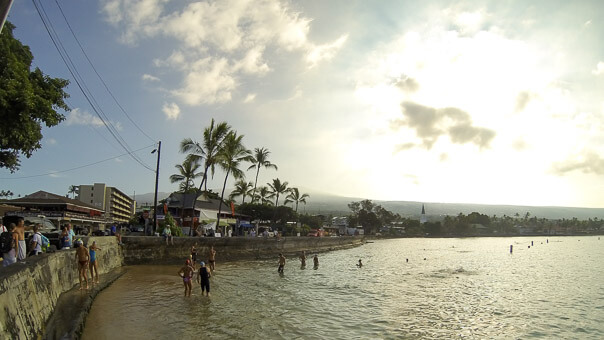 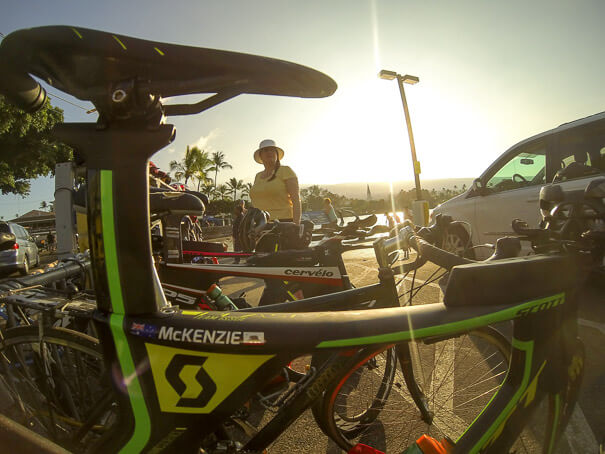 Just your regular 2nd place finisher in the 2013 championships parks his bike up (unlocked) whilst going for a swim!

You know what, I was only in the water for 10 minutes (er, ok, just a little more!) and I come up and Sharon’s there wanting to tell me something…. She’s got the job as a hula dancer and is moving to Hawaii? 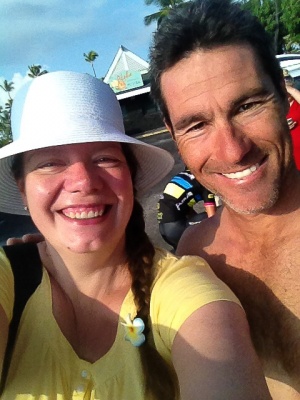 No, she just met Crowie by the pier. Who you ask? Craig ‘Crowie’ Alexander - three time winner of the Ironman World Championship. He’s retired from long distance racing but is still coming to town for the race. This place does have a pull to it, even for age group athletes (however unfit) like myself. I love it here.

I turn around to get my swim gear and who do I lay my eyes on.

No, not Miss Hawaii.

Close though - my favourite Danish professional Ironman athlete - Michelle Vesterby. In fact, looking at the photo of us both I think the excitement got the better of me and I appear to have wet myself with delight! 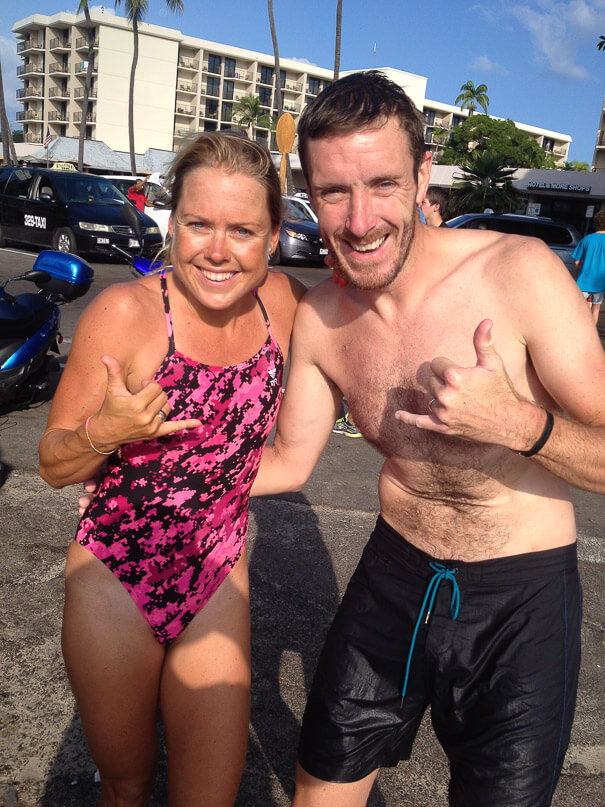 We then headed home and whilst Sharon wanted to take it easy - I thought it would be a good idea for us to head down the road a couple of miles down to Magic Sands Beach - the name being magic because winter storms often wash all the sand away leaving just rocks.

The place is sometimes called ‘Golden Sands’ and is a lovely little beach with a mean old shore-dump. Lots of people come here to swim or play on boogie boards. 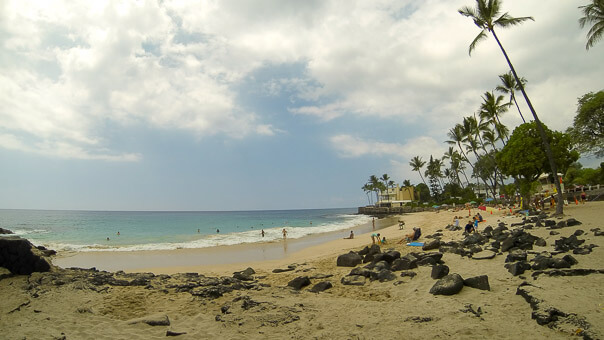 The sets of waves are few and far between but today our timing could probably have not been any worse. We just about made it out on our first attempt and then bobbed around for a bit enjoying the scenery. 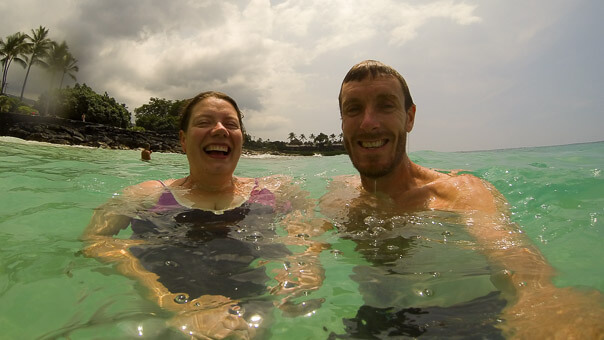 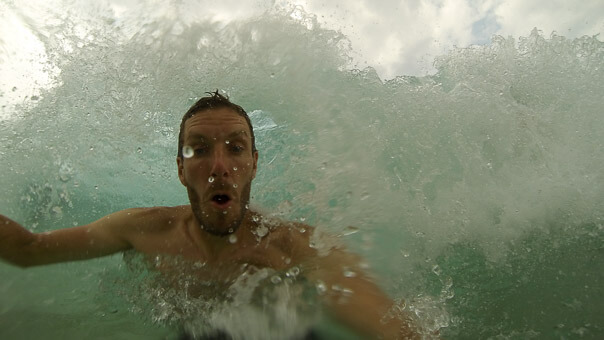 Next thing we find ourselves washed into the shore-dump area just as a couple of monster waves appear. OK, these aren’t huge waves by any standard but when you’re standing there (and Sharon was) and not being a fan of this kind of situation at all and there’s two people body surfing the exact same wave that’s about to crash on top of your head it’s a far from ideal place to be. 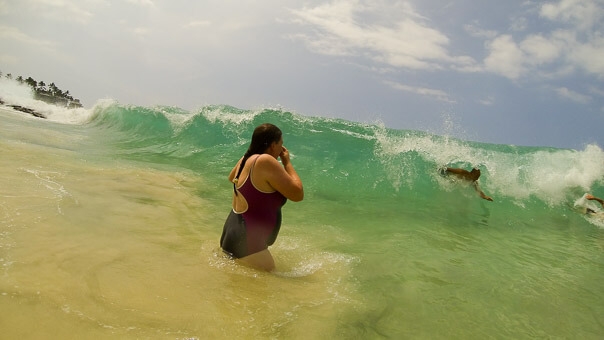 Anyway, whilst Sharon attempted to rinse the sand from every nook and cranny about her person I stayed in the sea a little and saw a little chap playing around directly in the shore dump area. He was a great swimmer and goes by the name of Honu. 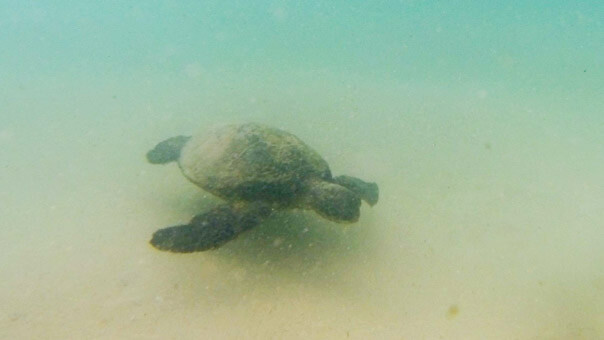 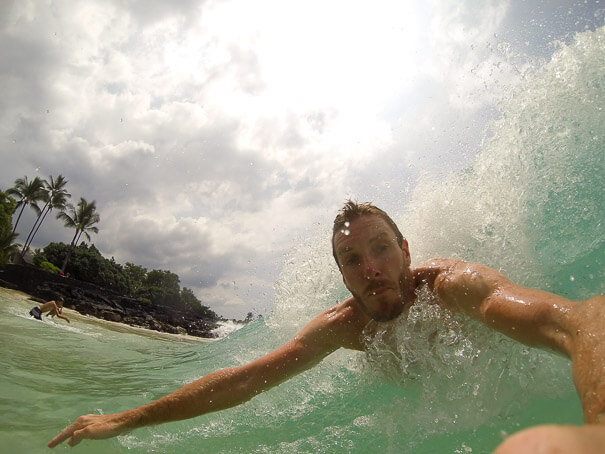 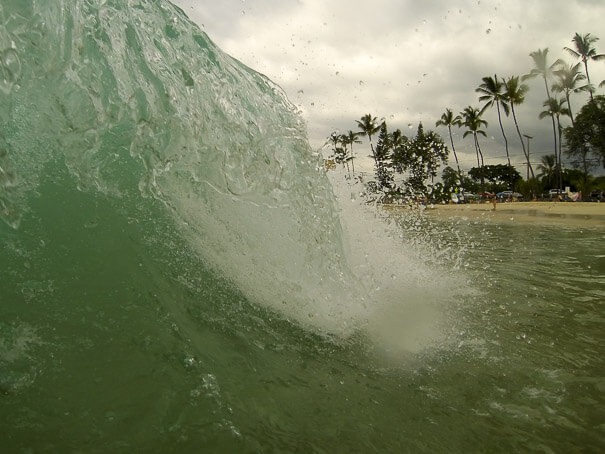 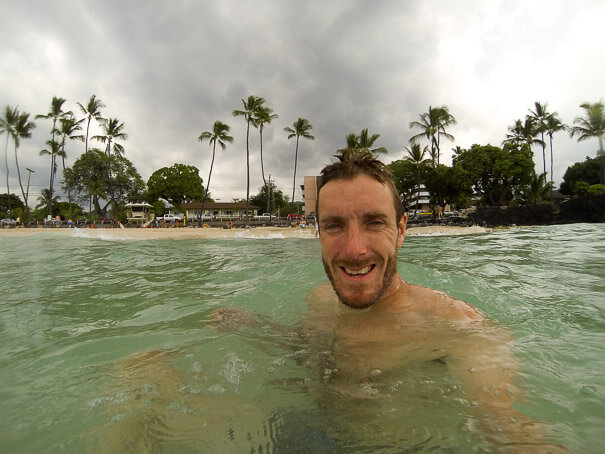 Back home for lunch - mainly because the little shack we wanted to get food from had run out and it was time for a quick snooze. Only quick as I had plans for later in the day.

At about 3pm we were back out of the door and headed to the other side of town. Firstly to look at a couple of shops - Sharon bought a nice dress and I bought an Aloha shirt and then a new bike jersey.

We then headed to the Big Island Divers shop to check-in for an evening snorkel trip. After getting sized up for flippers (fins) and completing the disclaimer that says we won’t hold the company liable if we’re eaten alive out at sea we headed to the marina to get our boat. 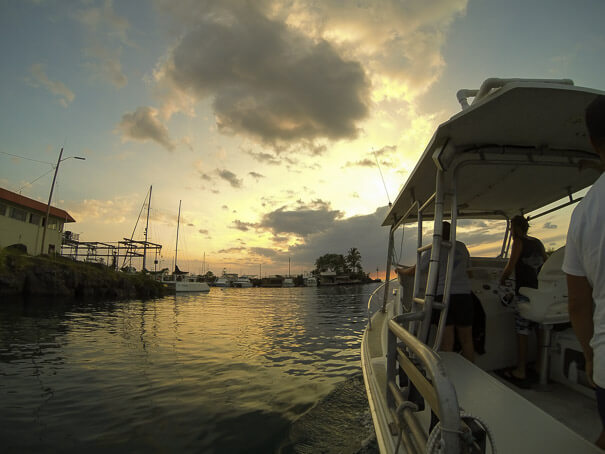 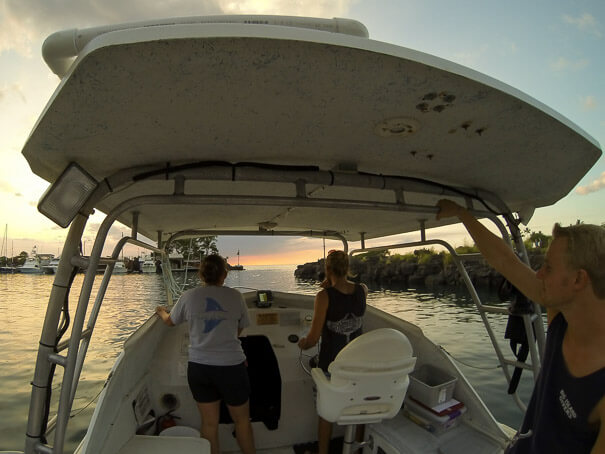 Along with two members of staff on the boat there were only six ‘punters’ on the boat trip this evening - two lovely couples from America (Don, Tammy, Mike and Leesa) along with Sharon and myself. We headed south towards Ho’ona Bay (known also as ‘Garden Eel Cove’) and en-route saw a beautiful sunset. Even better was the sight of a number of ‘spinner’ dolphins in the distance leaping and jumping as silhouettes in front of the setting sun. It was amazing. 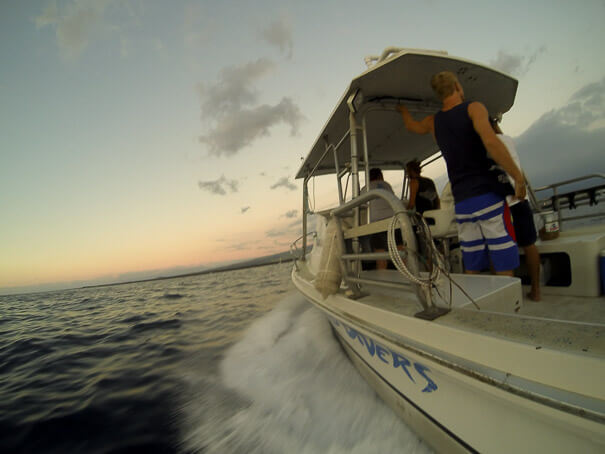 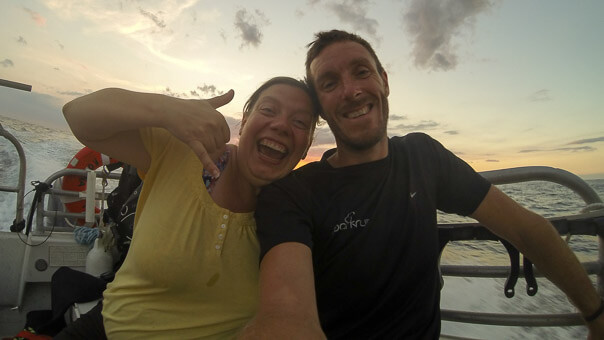 When we made it to the bay we got ourselves moored up (there are a number of submerged mooring buoys between 7 and 40 feet below the surface) and someone normally just dives in and gets the boats tied off! 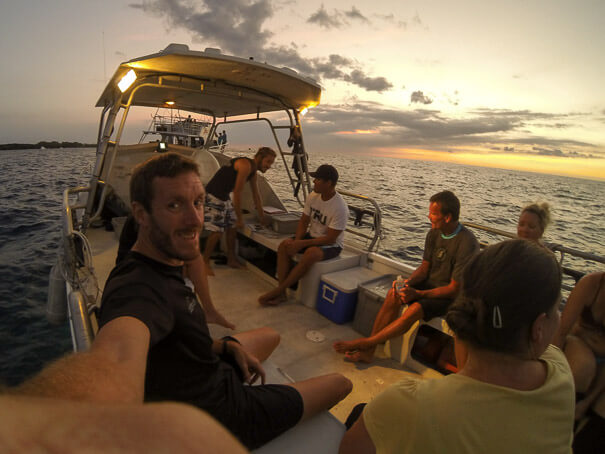 As the day turned to night and following a chat about manta rays it was time to put our wetsuits on and get in the water.

Because there’s a large number of charter boats running these tours they try and keep the different groups of people together so all the groups have little surfboard type things in the water that you hold onto. The good thing about this is that you all stick together, all see the same thing and the ‘surfboards’ have lights built into them which light up all the plankton in the water.

This plankton is what the mantas love to eat. 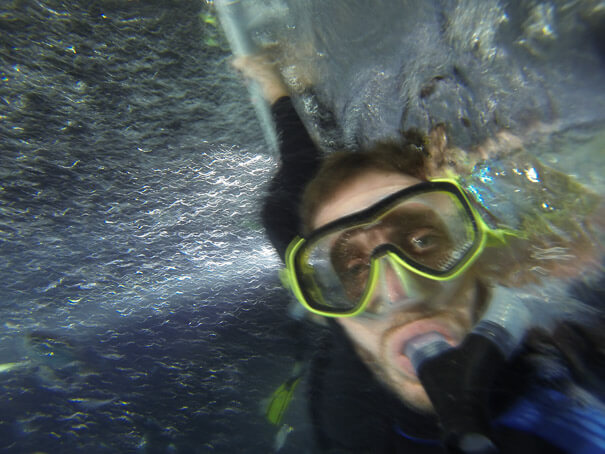 Well… we didn’t know how many we would see and if conditions were good or not. Whatever they were it was bloody amazing. There were well over 10 that we saw and they were spectacular. 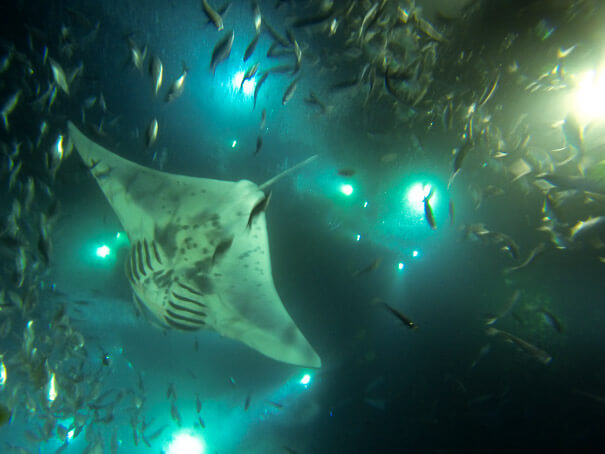 And huge! Some of these mantas are 12 feet or more wide fin-to-fin.

After a little while we then slowly moved over to what our guide called the ‘campfire’ - this was an area where there are a few snorkel groups up on the surface shining lights down to the seabed (which I guess was about 50-75 feet below) and at the bottom are a number of divers on similar trips to us but with lights shining up at us. The place was glowing with colour and the manta rays were loving it. 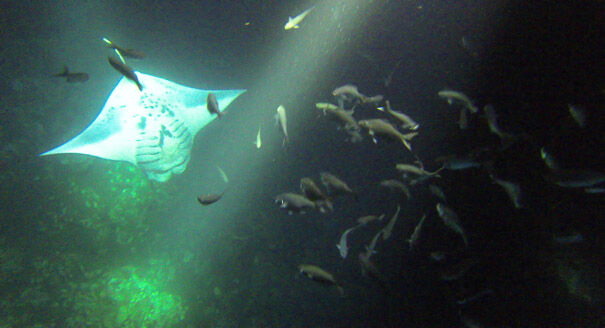 They were so elegant and graceful in the water.

Eventually we all returned to the boat, got out of our wetsuits and drank hot chocolate. Mike was so happy with his 5mm (extra thick) wetsuit keeping himself warm he said “that 5mm was badass!” - I love it! I don’t think I’ve ever said ‘badass’ in my life. It was the perfect description and sounds so much better with an American accent. I’d probably say something like “the wetsuit was jolly warm and pleasant.”

The return journey back to the harbour was in complete darkness and once we got back on dry land we returned home happy but hungry as all the bloody restaurants in town seem to close at 9pm!

Either way I made it into the ocean three times today so that warrants a rest tomorrow. Yay!