So it’s Thursday the first of October - meaning that I’m doing an Ironman this month. Actually, in 10 days time. Eeek! Ah, it’s all good. I feel so excited to be given this opportunity to race in Kona again and be humiliated by the best in the world. This is why we do this right?

Whilst on the Big Island there’s a few things I’ve wanted to do. One was cycle the road between Hawi and Waimea. I did that a couple of days ago. It was slow uphill and terrifying downhill. Excellent race practice.

Another thing I fancied doing was taking a look at some of the beautiful scenery on the east of the island. Last time we headed around the north of the island and went to the Pololu Valley Lookout. This time I wanted to head round from the south and this meant the Waipio Valley Lookout.

“Located on the northern Hamakua Coast, the sacred Waipio Valley was the boyhood home of King Kamehameha I, and an important centre for political and religious life in Hawaii. Not only is “The Valley of the Kings” an important site for Hawaiian history and culture, it’s also a place of dramatic tropical beauty.This fertile valley is about one mile across and over five-miles deep, and surrounded by cliffs up to 2000-feet high. Waipio Valley was once the home of thousands of Native Hawaiians. Today, there are less than 100 residents living amongst the waterfalls, taro fields and rivers permeating the valley. “

So we headed to the lookout which was pretty cool. But surely it would be cooler to ‘stroll’ down the hill and take a proper look. 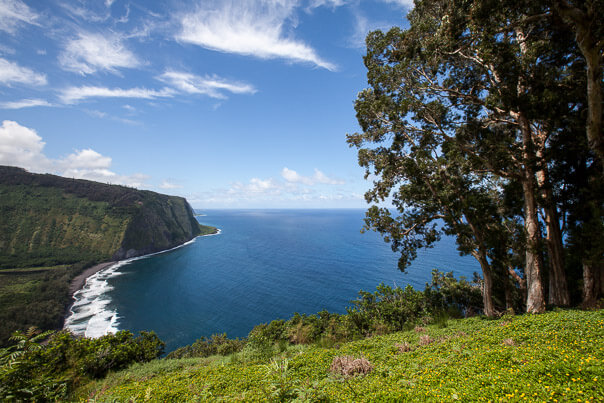 The road down averages 25% gradient. Yes, you read that right. It’s steep. Proper steep. Like a staircase without stairs steep if you know what I mean! According to Wikipedia:

“The road gains 800 vertical feet (243.84 m) in 0.6 miles (0.9 km) at a 25% average grade, with steeper grades in sections. This is a paved public road but it is open only to 4 wheel drive vehicles. It is the steepest road of its length in the United States and possibly the world.” 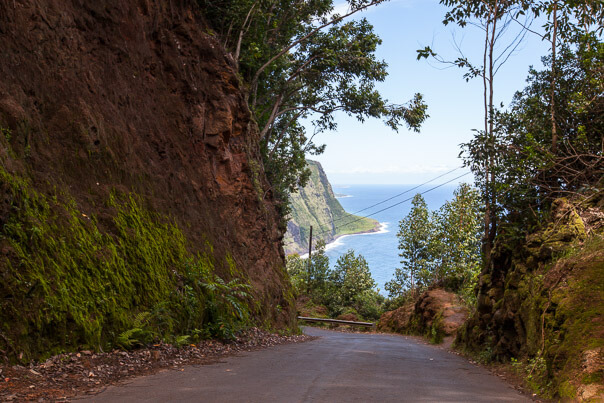 I’ve never had ‘jelly legs’ from walking down a hill but it was bloody hard work. And hot. 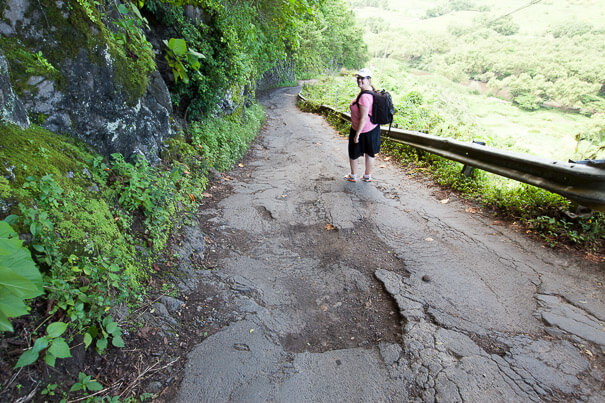 By the time we got to the bottom (it was slow going I tell you) we turned right down a gloomy unpaved road/track and started walking. We didn’t see anyone. Many a time Sharon asked me if it was the right way. My reply was always “I have no idea, but its fun right?” 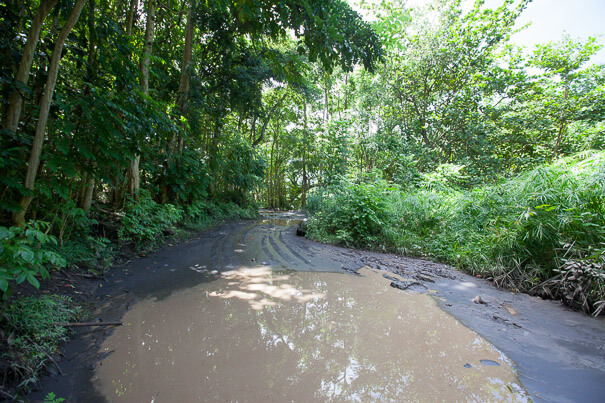 She didn’t see it that way. Especially as she was being bitten alive by midges or something down there!

Eventually the crashing sounds of the waves got closer and we emerged into a small clearing for cars and then the beach. There were big boulders leading into the ocean and the waves were loud, really loud. 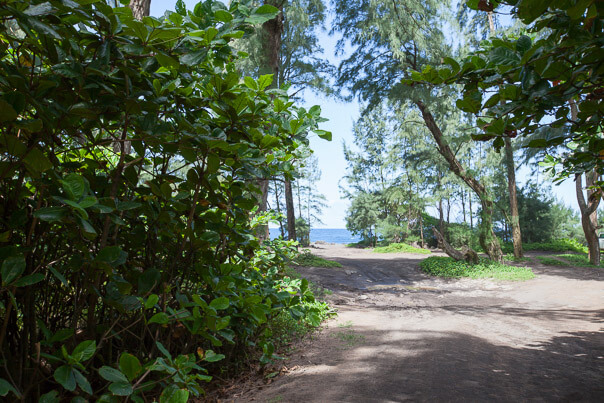 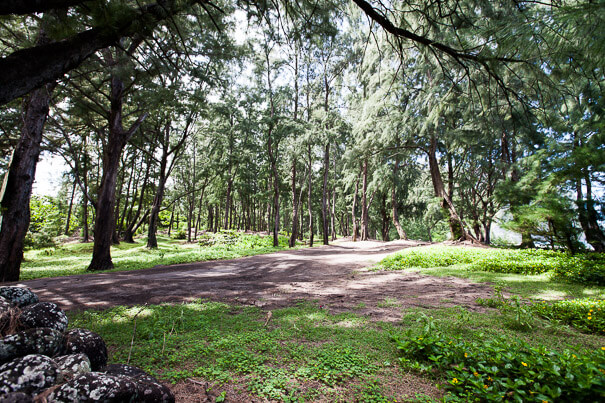 The view was lovely but most of our thoughts were on the walk back up *that* bloody hill. 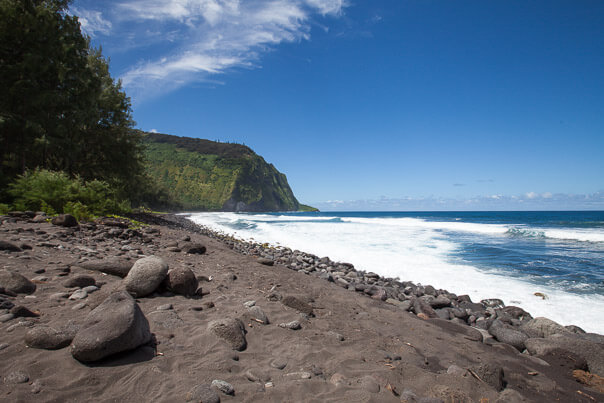 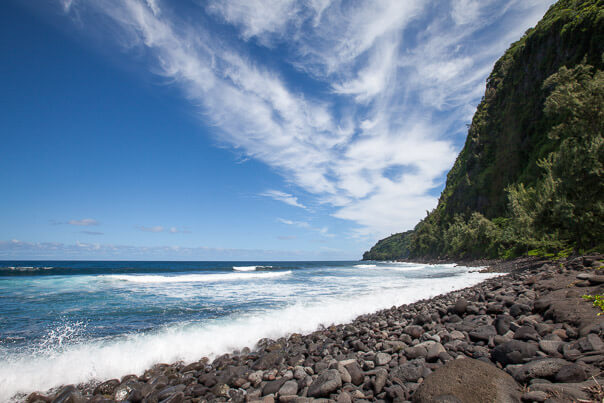 Whilst walking back to the base of the hill (and Sharon being nibbled some more) we saw a small red jeep do some sort of three point turn. A Japanese guy was behind the wheel and his wife (I assume) was the lady sat in the passenger seat looking terrified and gripping the hand grip by the door with all her might. They weren’t even moving at this point.

How on earth they’d get up the hill I have no idea.

We got to the bottom of the hill and as we made our first steps a rusty old pick up truck came from the track we came from and the passenger asked if we wanted a lift to the top.

Sharon kindly said no. I however said “yes please that would be lovely” in my best English accent. The thought of climbing mount bloody-steep or whatever it’s called soon came over Sharon and she was next seen jumping into the back of the truck. 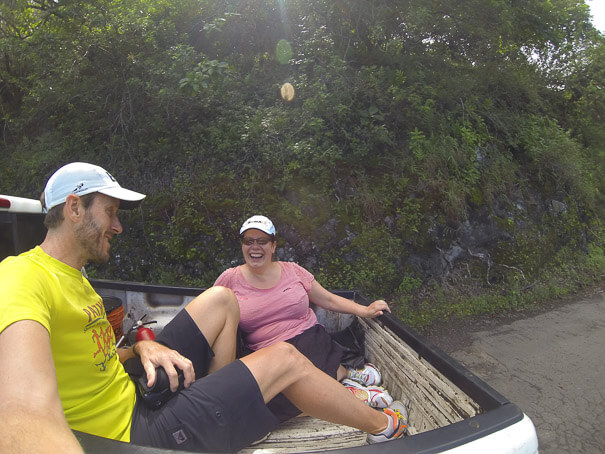 Of course we didn’t realise that the back of the truck seems to be used to transport oil somewhere. It was bloody everywhere. Good job I had black shorts on then.

We started climbing. We rattled about in the back. The truck rattled more. I wasn’t sure it was even going to make it. 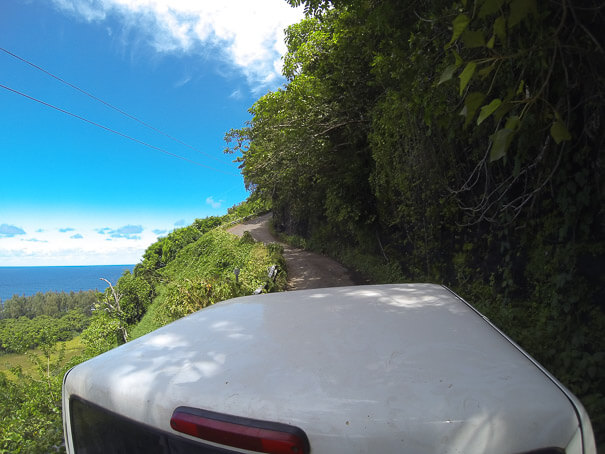 Two tourists were stood at the side of the road looking like they were seconds away from having a heart attack (those were their words). They were invited to join us and in they climbed. There wasn’t enough room for us but we made friends very very quickly over the next five minutes or so as the truck growled it’s way up the 25% incline. 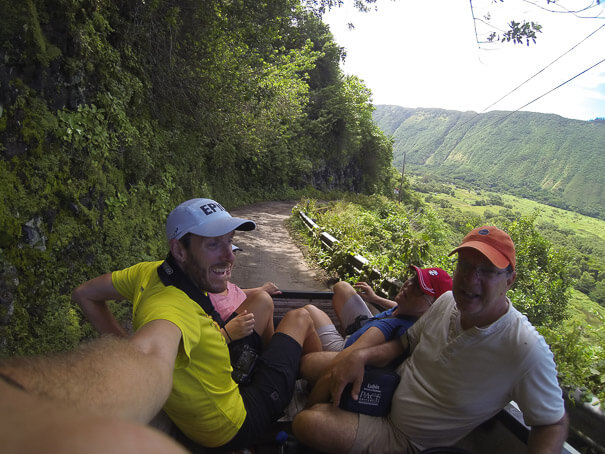 We reached the top having had a great fun little adventure and a golden handshake with the driver meant that we all walked away feeling that it was very worthwhile. We were still dripping in sweat from the heat but thankfully didn’t have to walk up that bloody road!

Right, it must be time for lunch.

I apologise that there’s not much talk of Ironman training in today’s diary. That’s alright though. You don’t need to train every day and surely I must be tapering now. In fact a few people asked me recently if had started my taper yet. My stock answer was “I’ve nothing to bloody taper from!”

Well, a big bike ride, a few swims and a couple of runs earns me a rest day in my books. So today was that day.

Not that it has been very restful.

Heading south from Waipio Valley we stopped in Honokaa. It’s a lovely little town and we found an awesome little shop where the chap behind the counter managed to tear himself away from the NBA basketball game on his monster TV to show us what hot food he had left in his slow-cookers. 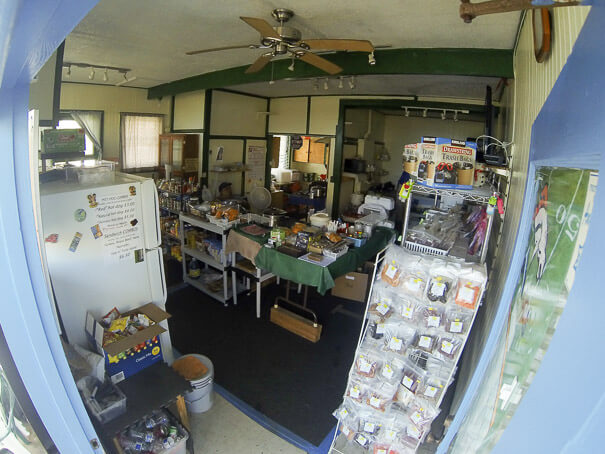 We both went for a belly pork dish with mac’n’salad with rice. Five dollars. Sorted. 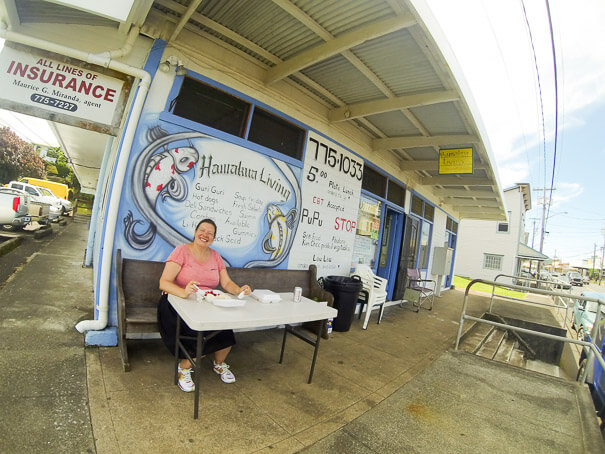 Whilst sat outside I saw a couple of people walking along with smoothie/milkshakes. I fancied a piece of that action so we headed back in that direction immediately after my last bite of food!

We found the shop, I gave them money and a couple of minutes later I left with a smile on my face and a macadamia nut and vanilla ice cream smoothie in my hand. It was bliss. 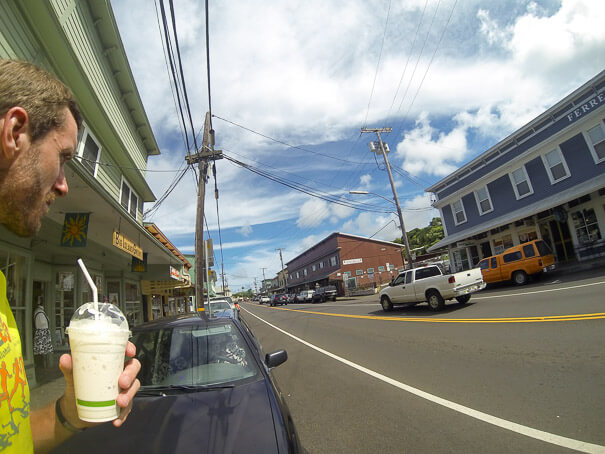 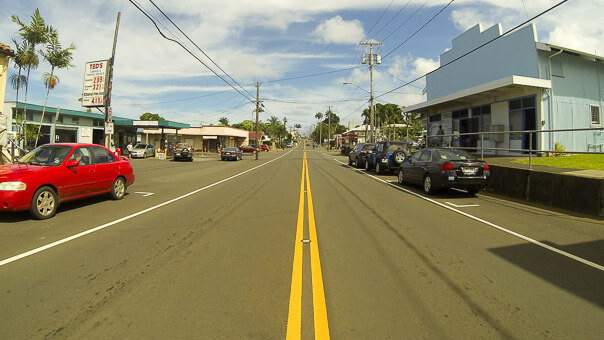 Our timing was looking good for the next part of our whistle-stop tour of the eastern area of the Big Island. There’s a couple of waterfalls that are probably worth seeing but mainly due to timing (and the fact that we’ve seen some amazing waterfalls in Iceland and New Zealand) we gave those a miss. Next time perhaps. 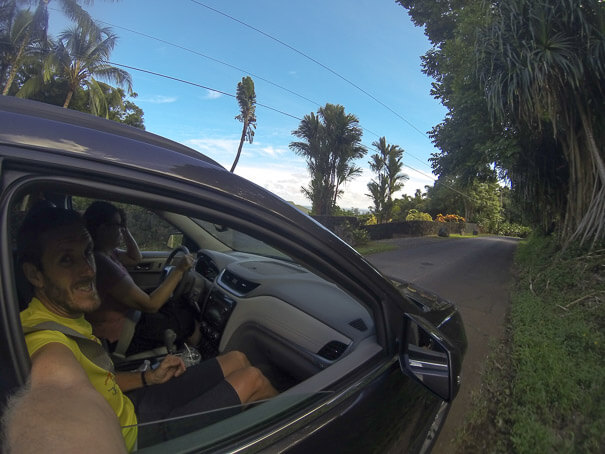 We headed south towards Hilo and wanted to get on Highway 200 to head inland towards Mauna Kea. Well… the sign for highway never seemed to materialise and next thing we’re stuck in the middle of Hilo (the largest city on the island) not having a bloody clue which way we were heading or how to get out of this mess.

My iPhone saved the day courtesy of the maps app I have (and the ridiculously cheap unlimited data plan I signed up for before we left the UK).

Next thing we’re back on track and climbing up into the mountains where it got very cloudy (we were in the middle of the clouds) and quite the opposite to what I’d normally think of Hawaii! 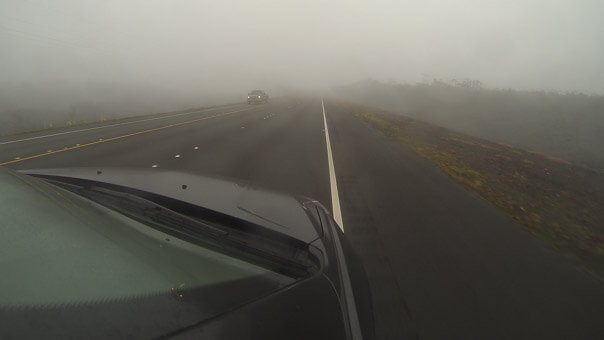 45 minutes or so later we hang a right and headed to the Mauna Kea visitor information station. This is around 9,600 feet above sea level and was lovely and cool up there. 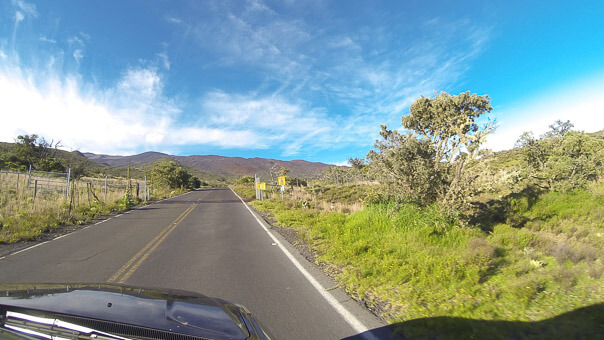 We stayed here and had a little wander around for about 45 minutes. You’re meant to do this to try and get used to the altitude before the next part of the journey - the drive up from 9,600 feet to a little under 14,000 feet - over six miles. There’s tons of signs saying that four wheel drive cars are strongly recommended due to the steepness of some of the roads and also that about 4 miles of the road is gravel and unpaved. 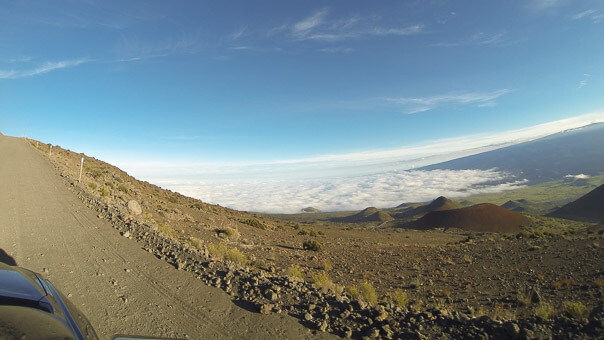 Well, it was just like a bumpy old road in England. We’ve got a pretty big car with big old wheels and it coped just fine on the road up. It’s pretty damn high up there and the edges look rather steep when you’re above the clouds and there’s not much below! 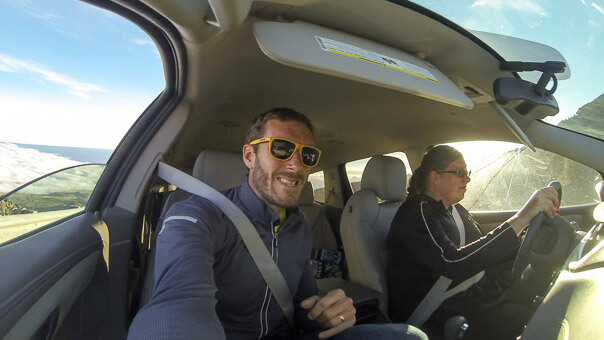 We made it to the top and parked up next to some enormous telescopes. To give you an idea, one of them is eight stories high and has a 33 foot diameter! These things are huge! 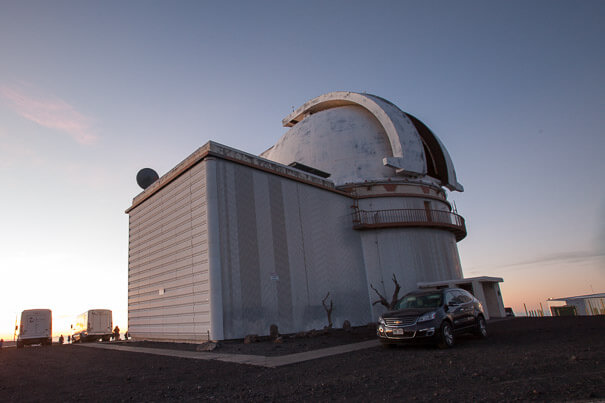 We had a look around and watched as the sun slowly drifted beneath the clouds and got to watch yet another fine Hawaiian sunset. 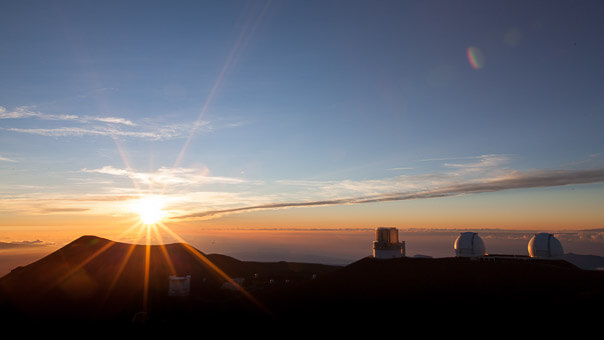 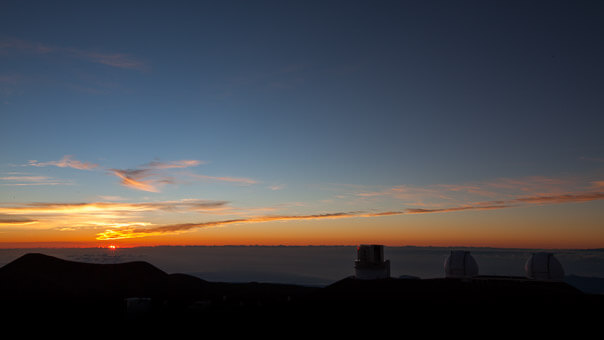 With 40% less oxygen and being at quite a high altitude both of us were feeling a little light headed. Sharon felt like she could just go back to the car and sleep for a year or two!

Pretty soon after the sun had set and it had got dark we were back in the car and heading back down to the visitors centre. Thankfully we stayed awake.

Many cars (apparently) burn their brakes out on the descent from the summit. The sensible folk use engine braking much more and not the actual brake pedal. So that’s what we did.

On the descent we caught up with a couple of other cars and slowed to a crawl. I’ve no idea why the car at the front - a 4x4 Jeep was incapable of driving down a hill. It’s brake lights were on constantly and it was driving on the wrong side of the road. Slowly.

The car in front drove past it and then so did we as it really didn’t know what it was doing.

Ah, it was a red Jeep containing the same people who we saw earlier in the day! Bloody clueless I tell you.

The drive down was actually much easier than the drive up. I think on the way up you worry more about what the drive down will be like. When you drive down it’s ridiculously easy. You just need to know how to drive. Unfortunately some people I believe do not.

After getting back to the visitors centre we bought a couple of drinks and stayed around a while for the light to darken further and to listen and watch a stargazing ‘lecture’ from a chap with a really smart laser pointer thingy that he would shine up and show us different stars. 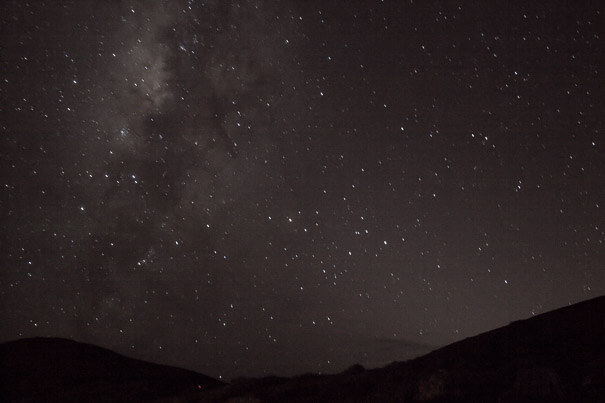 We saw the ISS (International Space Station) fly past as well as a number of satellites and shooting stars. The Milky Way was so clear to see and the number of stars that you could see were just incredible. We had a look through one of a number of telescopes setup on the night sky and saw Saturn and its rings.

The reason they have the giant telescopes at the summit is because it’s one of the best places in the world to see the night sky.

I tried to take some photos but didn’t have the greatest of success. The first few photos were a bit of a disaster - I hadn’t realised the lens cap was still on. I blame it from being dark and us requested not to use any torches or flash lights. I did manage a couple of reasonable shots though so my efforts were not completely wasted. 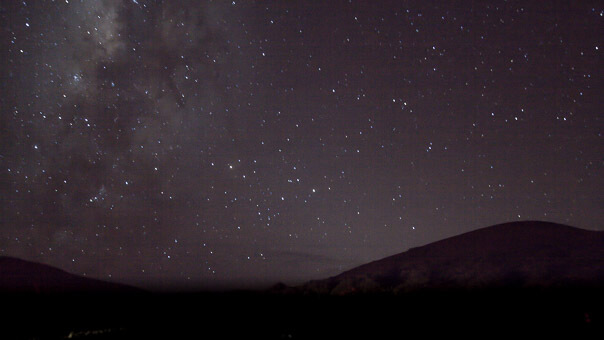 At about 8pm or so we left the visitors centre and headed back to Kona where once again all the restaurants were closed.

I think I’m getting closer to race weight. I’ve just got another 14lbs or so to lose in the next week and I’ll be ready!