When I woke up this morning my shoulders were aching. It must be a swim overuse injury so I should ease off a little I think. Yay!

Yesterday I thought about going for a longish bike ride today and that feeling was still strong this morning. On top of that when we saw this mutha funker of a cruise ship moor off of Kailua-Kona this morning (which is 315m long and has over 2,800 passengers, excluding crew!) it was a decided that I was going to get away from town for the day. 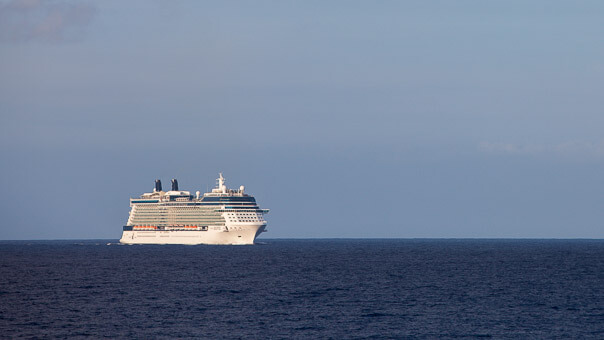 I left home shortly before 8am - this is ‘roughly’ the sort of time that I’ll hope to be out on the road on race day - give or take 45 minutes!

I headed up the Queen K in the direction of Kawaihae. The winds were so much lighter than on Saturday although the trees and flags at the Waikaloa Beach Resort were letting me know that there was definitely a bit of a breeze going on. It was much more of a side wind rather than head wind on the highway this morning. Much more manageable. 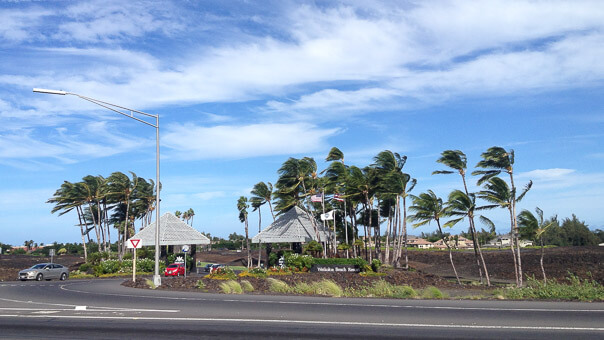 On race day we ride in the main road carriageway but prior to that you’re meant to use the shoulder of the road - and there are permanent signs to that effect. You just need to keep an eye out for lumps of rock right in your path! 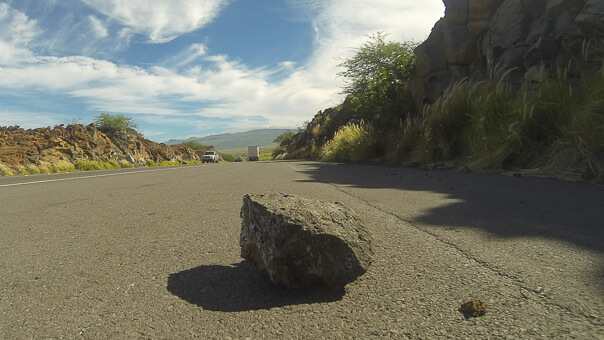 I made it to Kawaihae in good time and stopped at the old faithful gas station. I think I could probably get credit at that place. 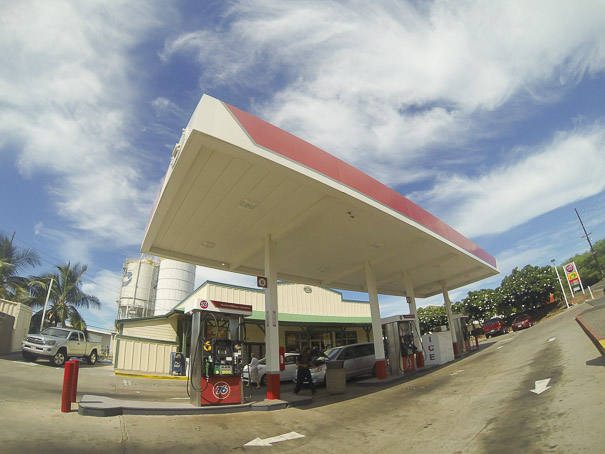 Drinks bottles were refilled (just to make the bike nice and heavy for the climb up ahead) and I set off up in the direction of Hawi. It’s about 18 miles away and is gently undulating to start and then a six mile steady climb at the end. In the Ironman race the bike turnaround is right in the middle of the main road in town.

Looking out to sea as I went up the climb it looked very calm in places - very unlike Saturday where there were ‘white horses’ everywhere. It did start to get windier as I headed further north and around the top of the island and here we started getting some sidewinds. They were very manageable though. 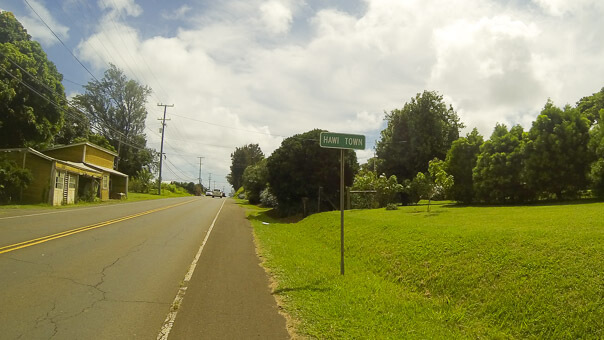 Oh, and it wasn’t raining which made a pleasant change. 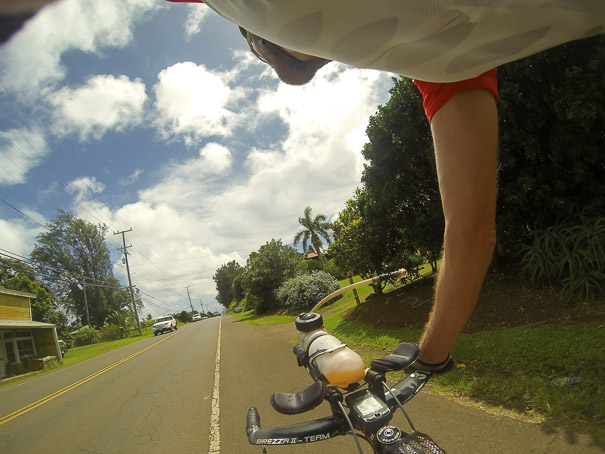 I made it to Hawi, used the restroom at a local shop (and left some money to say thank you) and then refuelled like a pro! 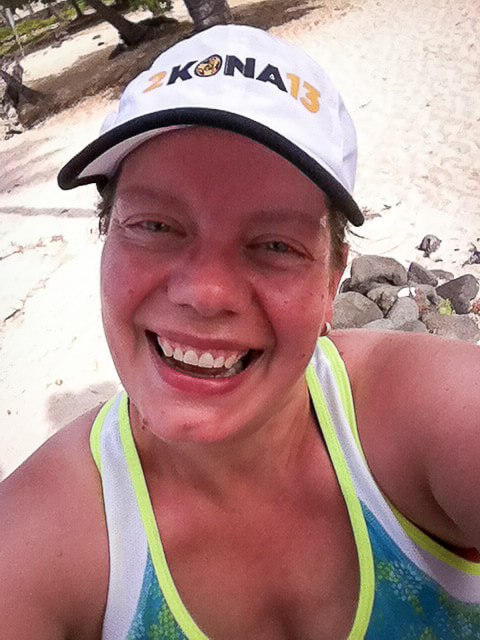 I dropped Sharon a text message so say that I’d made it to Hawi and she let me know that she’d been out for a little run along Ali’i Drive - like the pro triathletes do during the build up to the race.

I asked if she enjoyed it. Many expletives and the words ‘too hot’ came back in return.

I chatted to a couple of other cyclists who’d stopped at the cafe and after a little while headed on.

You see, rather than turn around and head back down to Kawaihae and then back to Kona I wanted to do a different route. We drove this road (in the other direction) a couple of years ago and I’ve wanted to cycle it ever since. So… at Hawi you take a right turn and head inland on Route 250 in the direction of Waimea. 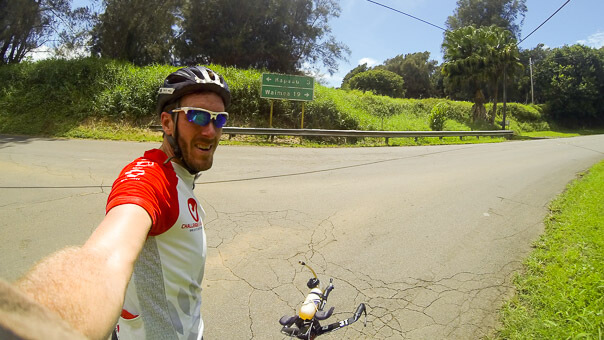 I recall that there would be a bit of a climb but I hadn’t planned for this - over 13 miles at an average gradient of 4.3%. Nothing too steep but it does grind on a bit.

To be honest I felt so bad I had to stop when I saw a sign that said ‘Healing Horse’. 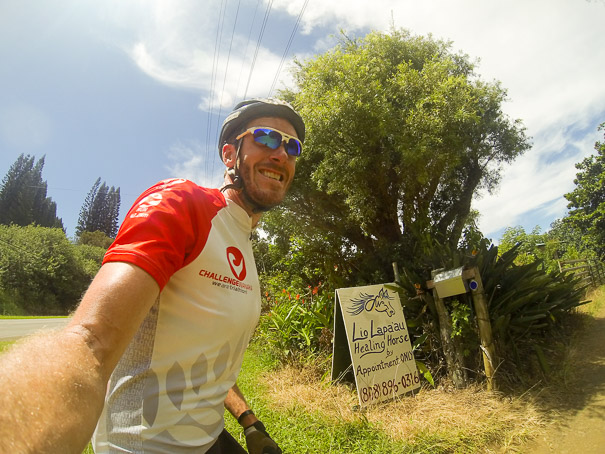 I went in, was given a sugar lump, a carrot and 20kg of hay and told to go on my way. I felt much better for it. 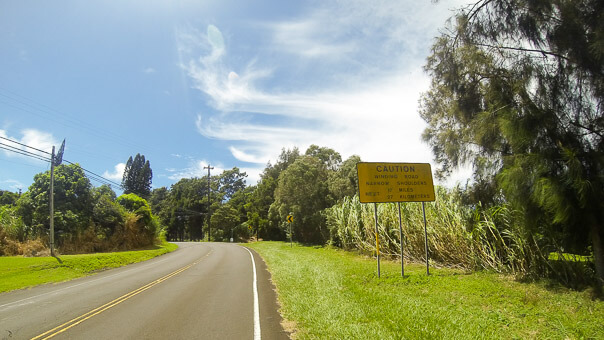 Oh good, just the 17 miles of winding road with a narrow shoulder

The climb just went on and on and when I saw the sign that said 2000ft of elevation I wasn’t impressed. 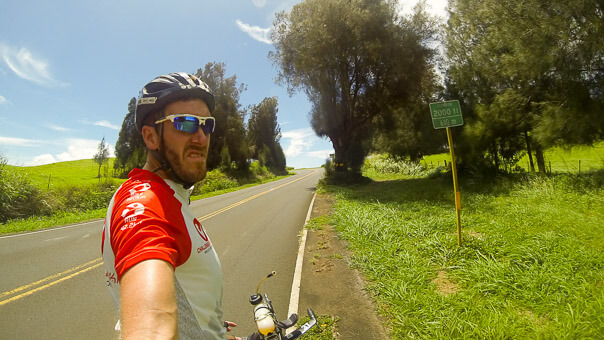 So I carried on. The views were fantastic mind you. 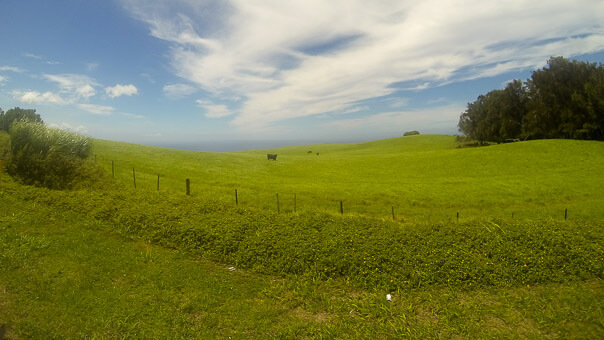 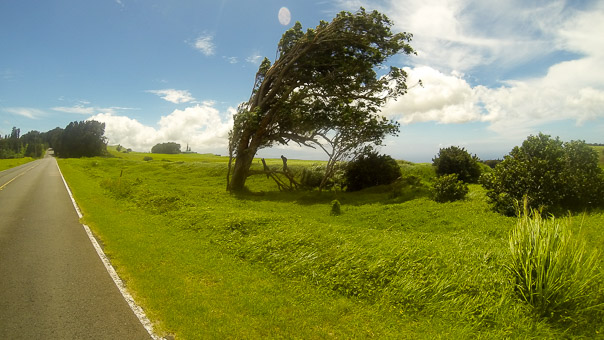 Can you guess which way the wind blows around here?

I was pleased to see the sign that said 3000ft elevation. But not overly impressed to see that the road was still going in an upwards direction. 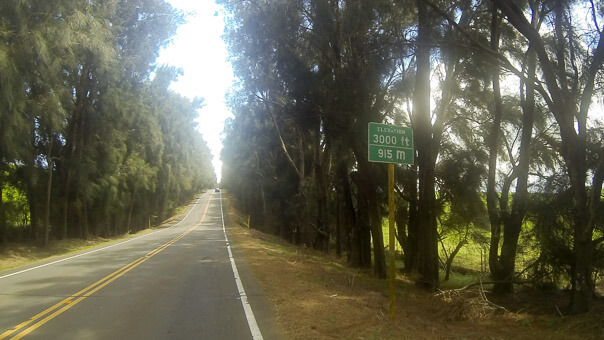 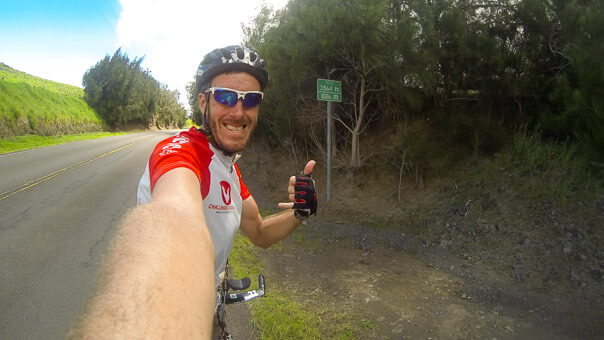 Surely a blisteringly fast and exciting downhill was to follow.

Some parts were rather fun. Other parts however were absolutely terrifying. You see, you’re flying down a rather steep twisty windy road and there’s this nasty sidewind trying to blow you off of the mountain. Oh, and because I’ve got deep-rim wheels on the bike my front wheel was being blown around like crazy at times. I was absolutely terrified every time the front wheel was blown forcing me and bike to suddenly move across the road. 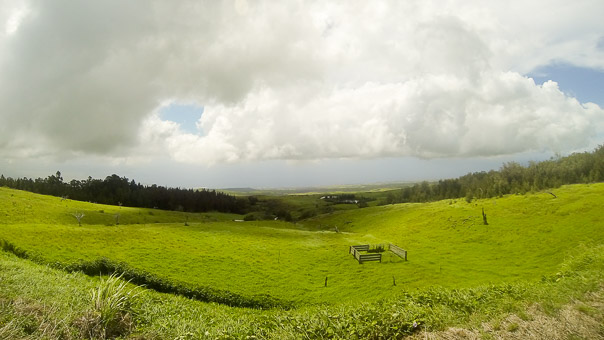 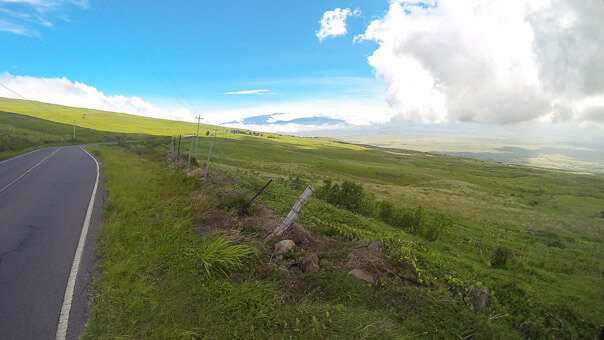 This was meant to be fun! It was not. At all.

Eventually I made it to the bottom of this part of the mountain - the town of Waimea - 2676ft above sea level.

I found myself a garage (at the ‘Waimea Express’) and got myself some lunch. Whilst browsing the shelves I saw something that looked interesting. I asked the cashier and she said it was some sort of heated bread/chicken/broccoli thing. That’ll do. And a can of coke chaser if I may. 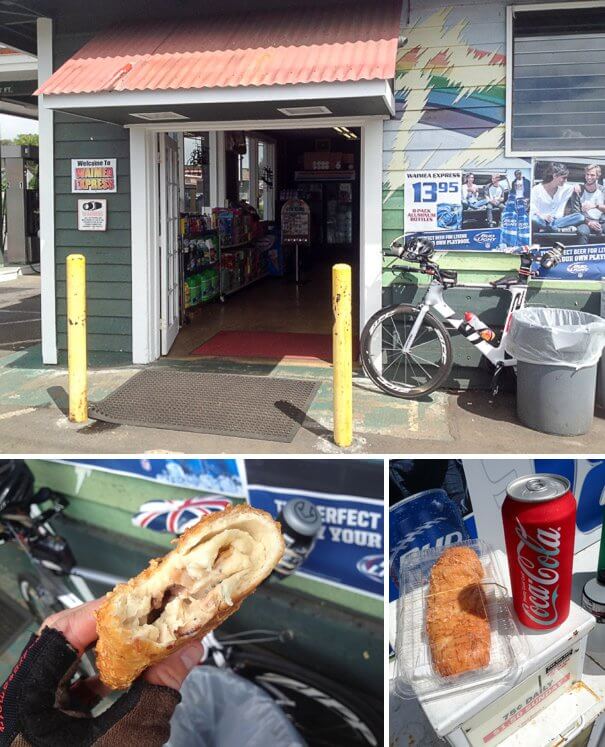 Whilst having my ‘lunch’ a school bus (‘the big cheese’) pulled up over the road and emptied itself of little rascals. One such lad came and said hello and we had a good chat for a few minutes. He was impressed by my bike. I was impressed that they finish school and get home before 2pm.

Now that my feast was complete I jumped back on my trusty stead and found myself on the ‘top road’ to Kailua-Kona. This was just over 41 miles of undulating but mostly descent all the way home. It was awesome. 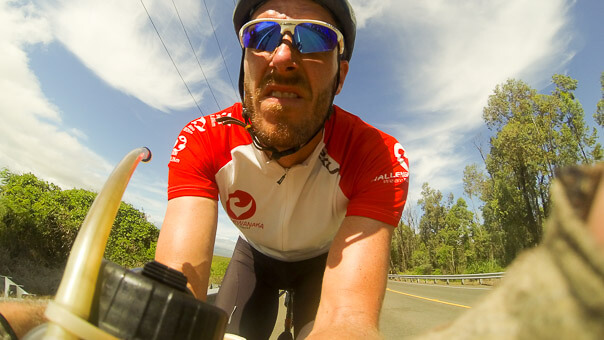 As I rolled into the familiar sight of Kailua-Kona the pier was heaving with tourists getting a lift back to their monster cruise ship and I pedalled easy back to the condo. I pulled up at the front gate with over 116 miles ticked off. 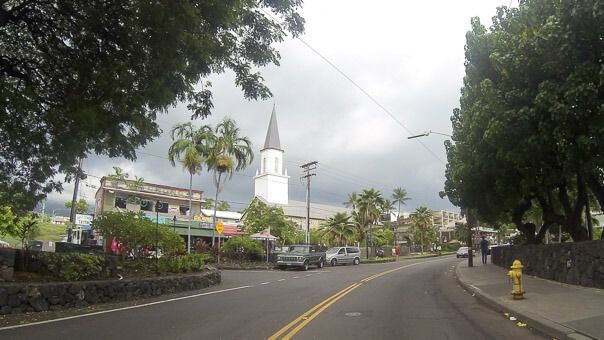 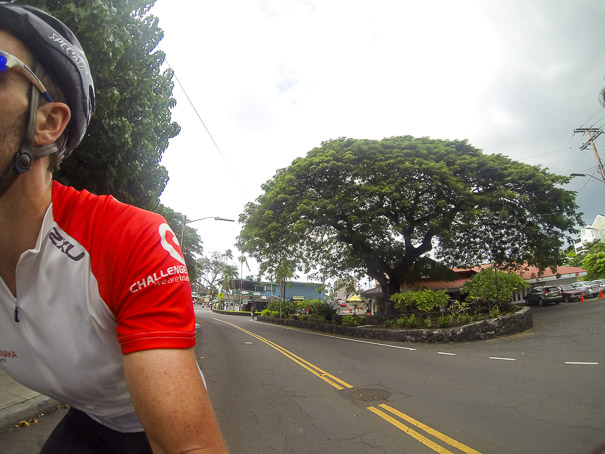 Could I have run a marathon after that effort? Well… only if you made me. In 11 days time I hope to get off of the bike feeling like I did today - then I think I’d be more than happy to go for a little run. 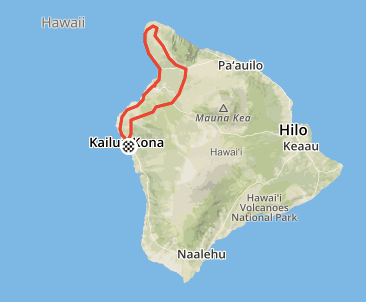 Today was my first ride over 100 miles since riding around the Isle of Wight at the start of May. My preparation for all sorts of reasons (which I’ve posted about elsewhere on the blog) has been terrible over the past 12 months but I needed to get today’s ride done to get my head ina good place. It is in a good place now.

So why is the title of this post called ‘BBQ Tuesday’ - well… back home in England there’s a group of us who hold informal BBQ’s at the beach on any warm sunny Tuesday evening during the summer months. Today was Tuesday. It was warm and sunny. OK it wasn’t England but a BBQ would be perfect for me to get some protein inside of me to repair the muscle damage from today’s ride.

So I did. As part of my ‘get myself down to race weight’ routine that I’ve just started I went easy on the portions. So here’s a photo of my dinner. 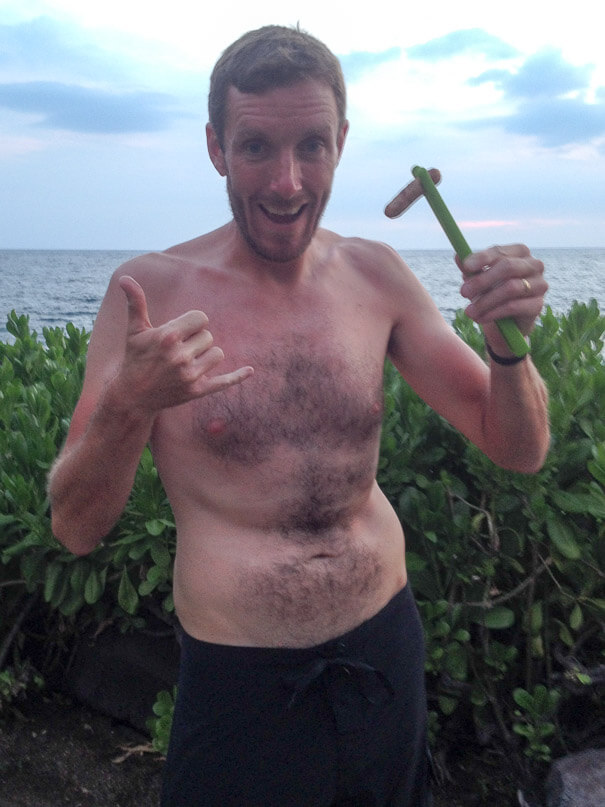 Just as we finished cooking our food on the BBQ the sun started dropping below the horizon and the cruise liner headed off into the distance (tomorrow morning it will be docked on the island of Maui). 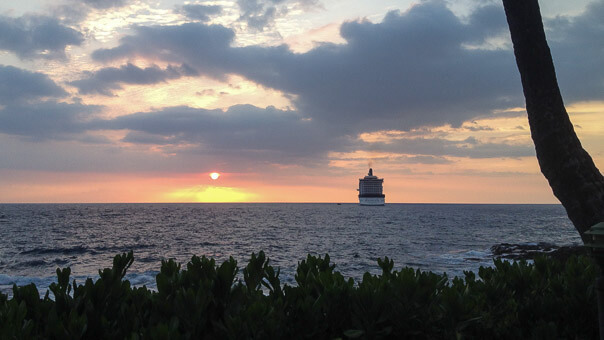 The view from the BBQ (just down from our lanai) was pretty sweet this evening. Just like it is every evening.