Back to my favourite running race in the calendar (this is my 11th time taking part). I’ve been looking forward to this one for a few months now I as love running round the local streets with 1500 others and getting tons (and tons) of support from the amazing supporters out on the course. It really is a great atmosphere to be a part of.

Training this year has gone well and the past few weeks I’ve been able to get my parkrun times (ok, just 5k, not 10) to just above 19 minutes 30. If I can ease off a little on race day surely I can do two twenty minute 5k’s? This was the plan.

Well it was until earlier this week. All this week I’ve been feeling pretty rough. I’ve had one or more of the following - headache, cold, hayfever. It’s really knocked me about this week. So much so that I cut right back on alcohol - yes, it was that bad! I’ve not managed a reasonable nights sleep amongst all of this as well. I was not on top form, that’s for sure.

When it came to Saturday (the day before the race) I had planned to run at parkrun - like I do pretty much every Saturday. I work up (at 4am!) and didn’t feel great. In fact I decided to not even go along and watch. I spent Saturday indoors at home all day - it was good to catch up the Giro d’Italia cycling on Eurosport though :)

I managed a good sleep and decided to give the race a go. I really didn’t want to miss it. My legs felt heavy but I was looking forward to it.

I decided to stick to my plan - run the first 5k in about 20 minutes and see what happens.

So that’s what I did.

It was great to give my Bognor Regis Tone Zone Runners vest another outing - plenty of support out there on the course today both for myself and also the ‘borange’ coloured vest (that’ll be blue and orange).

Although drinking loads of water prior to the race I started with a mouth that was dry like a desert! Ah, whatever. I also felt quite hot. Never mind.

The race started, I got myself in a decent position close-ish to the front and started to tick off the k’s. I was bang on target pace (if anything a handful of seconds quicker but that’s all) and went through 5k in about 19:55. Perfect.

At about 5.5k you turn back onto the promenade and this is where the fun begins. Fun meaning a lovely headwind. It was a good one today as well - probably just about a force four and building. And a perfect headwind!

Frustratingly there weren’t many people around me. I went past a couple of people but for the most part I ran about 3k entirely on my own with no shelter. 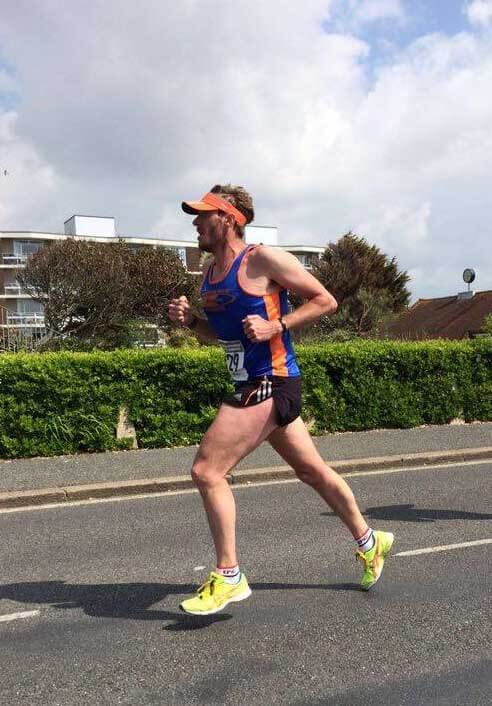 Just before 9k I noticed two people coming up behind me. As they drifted past I noticed one of them was Tim. I’ve known Tim for years and run with him often at parkrun. I’m sure he wouldn’t mind a little company. Especially when it’s about 2 inches behind him taking advantage of him battling against the headwind!

I tucked in and got a cracking little spot all the way until we come off of the promenade for the final 500m or so. At this point he drifted ahead.

I battled on. It was tough, but was so close to the finish.

My thoughts of a 40 minute time I waved goodbye to a long time ago. I knew that anything in the 40:xx was pretty much out of the question. Never mind. It wasn’t a problem. Based on how I was feeling this week I’m pretty happy with how well I managed to keep going. I think only two people came past me in the final 5k. And I overtook maybe 4 people during that time. I’m happy with that.

I had a much better run that last year and had I not have been feeling under the weather for much of this week then maybe I could have been a fair bit closer to 40 minutes. The headwind would have probably stopped me dipping under 40 this year.

Never mind. I’ll be back next year for more fun at my favourite 10k.