I don’t run hills. I very very rarely run off-road (I ran on the beach once this year and that’s about it). So why not be part of a team of four running 10 miles each mostly off-road between Worthing and Brighton up to and along the South Downs Way? No was my answer.

A few weeks later I heard you got a decent burger and chips at the finish.

There were 30 mile or 40 mile options available if you fancied it. 10 miles was enough for me as this was the minimum distance necessary to get fed at the finish.

So, Sunday morning dawned - it pretty much was dawn as four of us jumped into a car at 5:30am and headed over to the David Lloyd Club in Worthing to get registered and ready for the run. Our team of four was decided a few weeks ago but the leg that each of us would run was only decided three days ago. I was leg two. 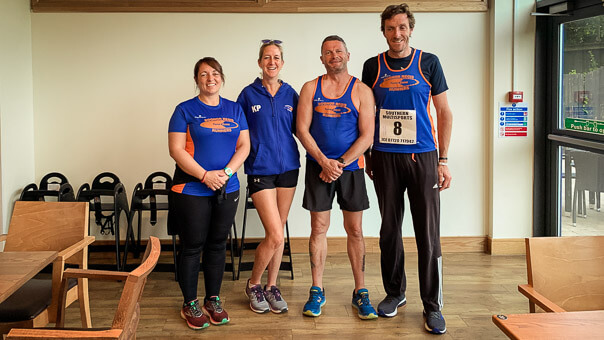 After an obligatory team photo - in height order (Lisa, Kirstee, Allen and myself - although I think Allen and Kirstee should have swapped!) we headed out to the start. At 7am there was a quick 3,2,1,Go and everyone headed off in the direction of the South Downs. Lisa was starting the race for our team and the plan was for her to go hard and take the lead early on.

The only issue was that we forgot to tell Lisa the plan. 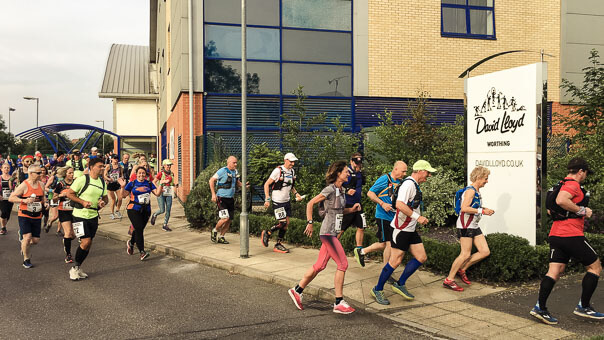 We headed a few miles up the road to where they’d come past us and gave them all a good cheer. Lisa was in good spirits - even though it heading was uphill. Always smiling that girl. Not even these hills would break her. 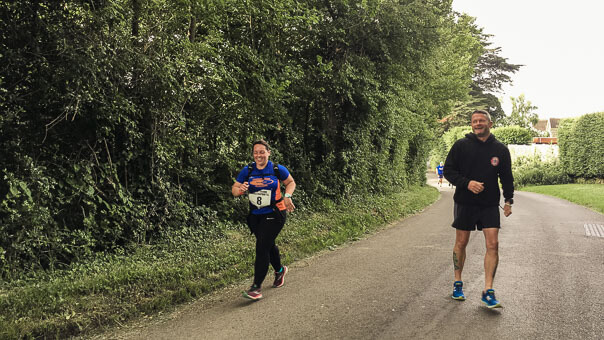 Back in the car and off to the first checkpoint, around 9.3 miles into the run at Kithurst Hill. The first runner came in after a superb run. 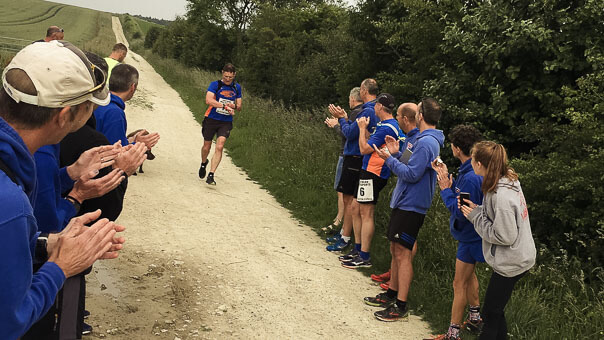 The second runner then appeared from a completely different direction after getting lost (this will be the person who claimed before the start that he’d got his Duke of Edinburgh Gold Award!). Some other runners appeared from yet another direction but the majority did seem to run the correct route. 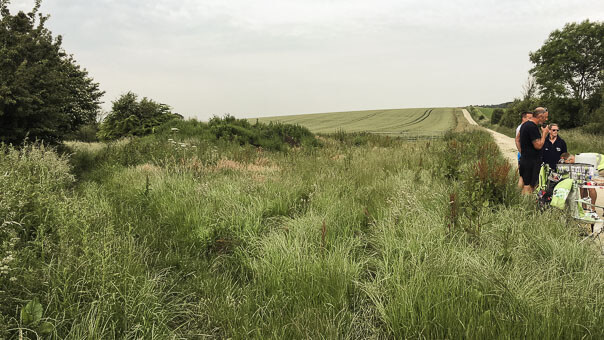 The long run down to the first handover point is on the right of this photo. The overgrown path on the left is where one of the other relay runners (let’s call him ‘Jack’) appeared from!

The weather was lovely and cool but forecast to get much warmer. Summer I think has at last arrived. 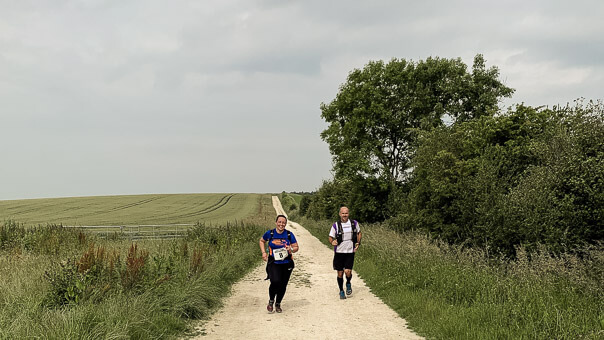 Lisa heading to the end of her stage

Suddenly over the brow of the hill there was Lisa. As she came running towards me at the changeover point (and aid station - the pre-run jelly babies were lovely) she was waving her relay-runner-wristband to give to me. I grabbed it and then headed off up a hill. One of many. 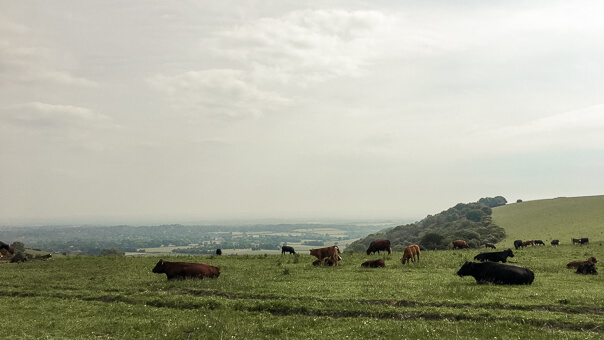 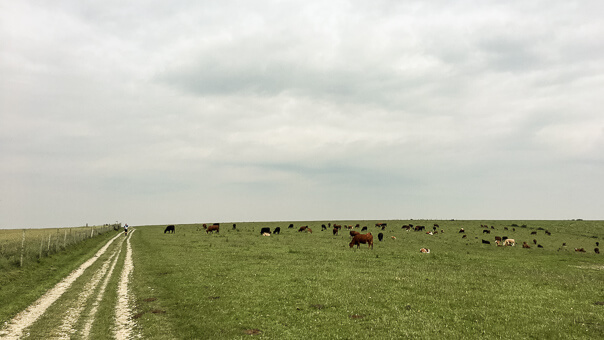 The navigation for my stage was meant to be pretty easy. Pretty much follow the South Downs Way. I did have the map of the route loaded onto my phone which helped a great deal as there were times where I wouldn’t see any other runners for 10-15 minutes. The route was straightforward but you do need to keep a close eye on where you’re going. Well done to any individuals doing the 30 or 40 mile ultra run distances today - that cannot have been easy.

Being a fairly speedy runner I hoped that I’d be able to make up a few places during this stage.

The surface underfoot varied from grass fields, a bit of road running and mostly up down and along chalky paths with some lovely loose stones to catch you out if you weren’t concentrating enough. Thankfully the weather was good and we’d not had rain lately so it was dry.

You have to have a few pieces of mandatory equipment on you during your run stage (foil blanket, spare dry t-shirt, mobile phone and a litre of water). I had it all in a little rucksack and didn’t go near the water at all during the ten miles - it was there just in case. My phone I probably carried in my hand for about 2-3 miles in total - as I wanted to check that I was on the correct route at all times. And take the photos you see before you! 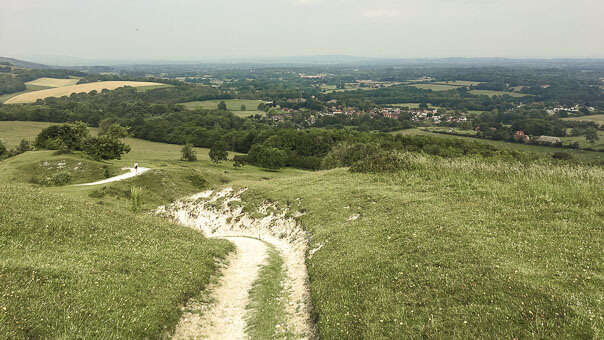 Looking back down hill. We’d come up from the town in the distance and you can just about see a runner towards the left of the picture in the distance

Some of the uphill sections were mighty steep, and the same can be said for the downhill parts. But there were plenty of slight gradients. I made great progress moving up through the field and at one point saw a couple of runners from our club stop and take a selfie up ahead of me. I shouted out something along the lines of “hey… wait for me”. 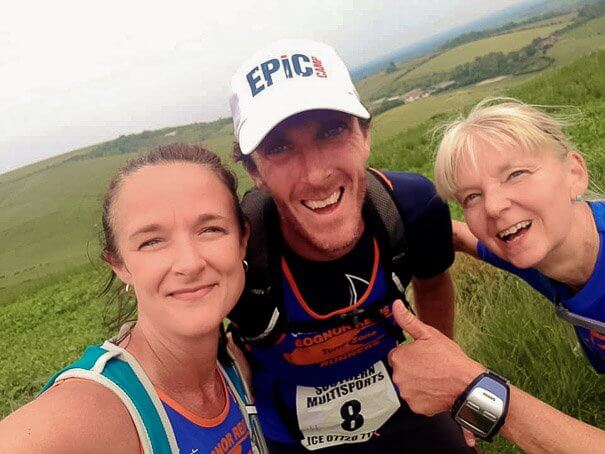 Thanks ladies - I think you’ll agree that the addition of myself really makes the photo that much better!

Part of the route took in the sights and tracks of the Three Forts Race that I had completed a few years ago. That half marathon (there’s a 27 mile option for crazy folk) was hard work. Today was very similar!

After about one hour and 20 minutes my watched beeped to say I’d run 10 miles so I was expecting to get to the changeover point before long. In the distance I saw some people in high-vis vests and some cheering - that was it. One final push to the finish and a swift changeover with Allen who was running a just as hilly stage three. 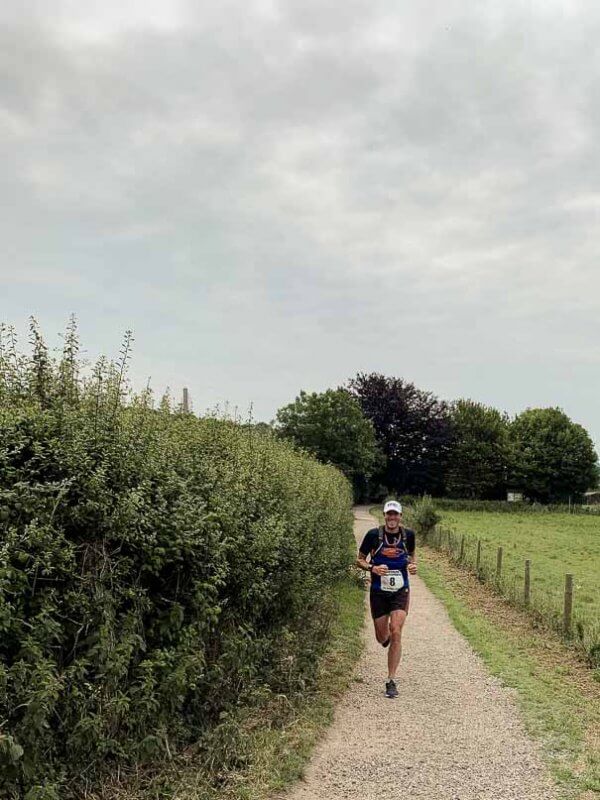 Heading towards the finish of stage two

I was shattered. I really worked hard out there. I’ve not run up and down any hills like that in years and my legs are going to feel it in the morning (note: they did - a lot.) but I was very pleased with how I did. That was a good hard workout a day after a good run around our local parkrun.

After rehydrating (chocolate milkshake of course) the rest of our team (Lisa, Kirstee and myself) jumped in the car to head off to track down Allen mid-run to offer a little support. Thanks to the ‘Find my friends’ on our mobile phones we were able to track each other during the race and make sure we could offer mid-run support at the right place and time. It worked perfectly. 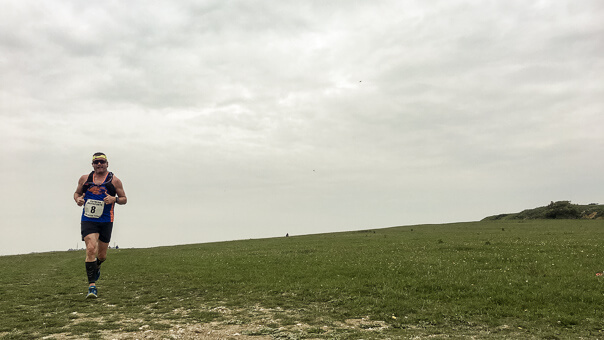 After a quick mid-stage support stop for Allen we headed off to Ditching Beacon for the final changeover. It was really getting warm at this point and the South Downs Way was busy with people enjoying the lovely weather.

Before long Allen came into sight and with Lisa as our official ‘gate opener’ he came past and swapped places with Kirstee who had to run approximately 10 miles to the finish line in Brighton. 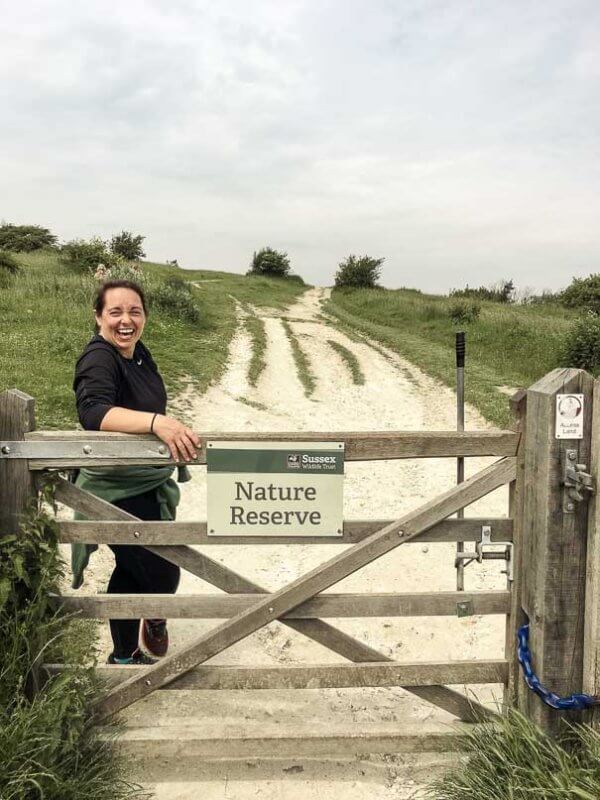 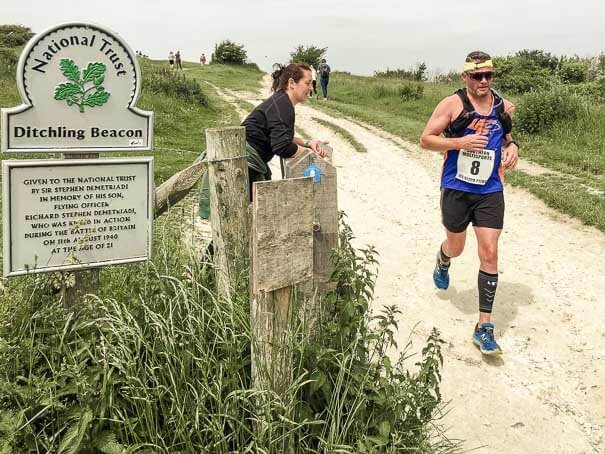 Allen heading into the finish of stage three 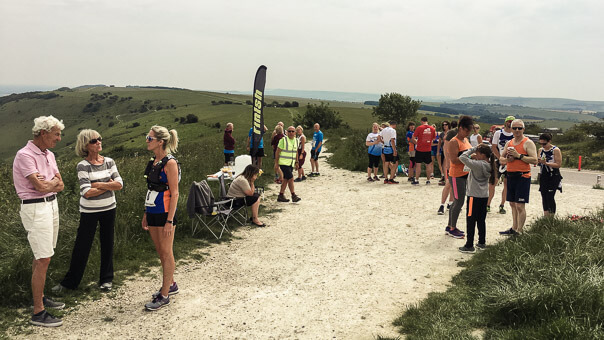 The 30 mile finish line and start of stage four 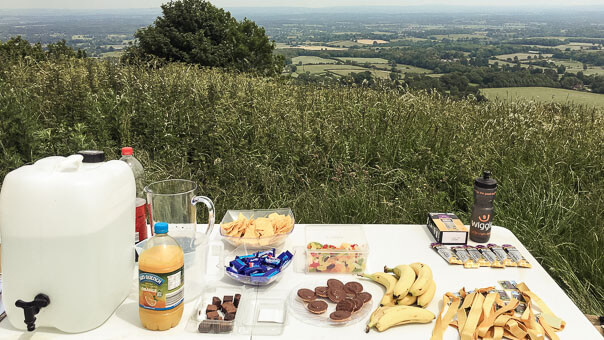 The 30 mile aid station - the jaffa cakes were melting in the sun so needed urgent attention!

We managed to see her twice during her stage - once close to the Amex football stadium and then also a couple of miles outside of Brighton. Our timing (and the run route handily being on paths close to the main road into the town) was perfect for a couple of rendezvous. 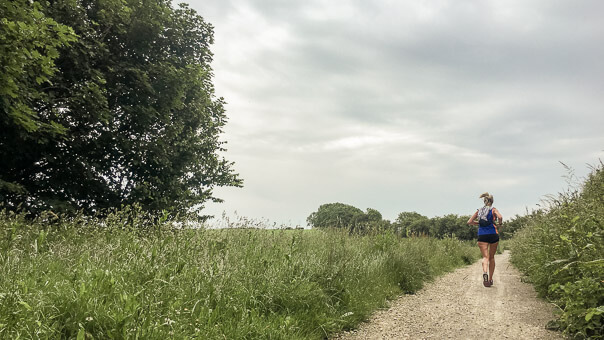 We then got ourselves to the finish - the David Lloyd Club (gym) at Brighton Marina and waited for Kirstee to appear. Within a few minutes of arriving she came round the corner and into the finish. Brilliant. 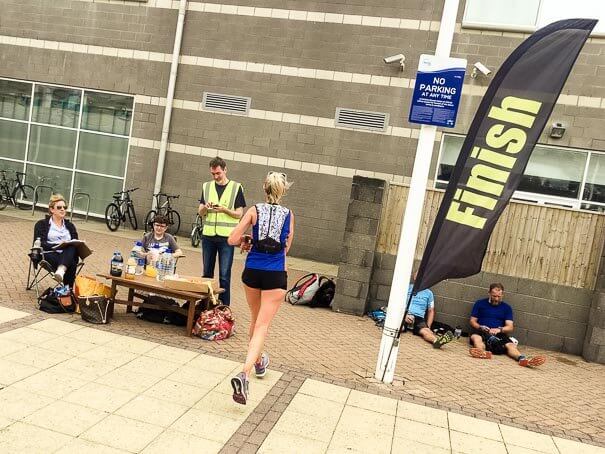 Kirstee finishes. In the background the two gents collapsed on the ground had just finished running 40 miles! Bravo.

Due to the nature of these events being pretty small and low key an Ironman-esq red carpet with music etc. was certainly not expected. Just the essentials were there. A finish line, timing, medals and some refreshments. It ticked the box.

We then headed into the David Lloyd Club for a lovely relaxing rest in the hot-tub (for about half an hour!) and then up to the restaurant area for our burger. It was lovely. Really lovely.

Our overall time was just over seven hours and two minutes. We were sixth out of 15 teams that took part. I’m really proud of how we all did - everyone ran their best, the in-car banter was top notch and we all had a lot of fun. The marshals on course were excellent, the race organisation was great and having a super posh gym/health-club at the start and finish was a lovely addition. Oh, and did I mention the burger…

Apparently in 2020 the run will be from Brighton back to Worthing. I could be tempted.