The last time I wrote about beach running here was in 2016 when I took part in a race in Littlehampton. I wrote at the time…

Straight after the finish I saw Ben (the race director of the new Felpham Five event) and immediately offered myself as a volunteer for his race - anything not to have to run!!

In 2016 I volunteered for the race. I don’t think it took place in 2017 and then…. well… for some strange reason in 2018 I entered and took part in the Felpham Five event. It was really wet, seaweed was everywhere and I got filthy again. It was strangely enjoyable (apart from the horrific headwind on the second half) and I actually wasn’t too put off from running one of these races again.

Well… here we are in 2019 and this years running of the Felpham Five (which is less than half a mile from our front door - so my kind of race) was taking place - so I decided to enter. It started at 7pm (normally it’s a morning race) and there was the promise of an ice cream for every finisher. Sign me up!

The weather was cool (for June) and there was a bit of a breeze but not quite as windy as last year. At about two minutes to seven I decided to go for a warm-up (I’d kept extra layers of clothes on until the very last minute). After 10 seconds I heard an announcement that the race was about to start - right then, that’s the warm-up done!

We all lined up (about 150 of us) and waited for the starting signal. The start is on the promenade and after about 150 metres you head down a concrete slope to the beach, and then you get sandy and wet. For five miles (ish). 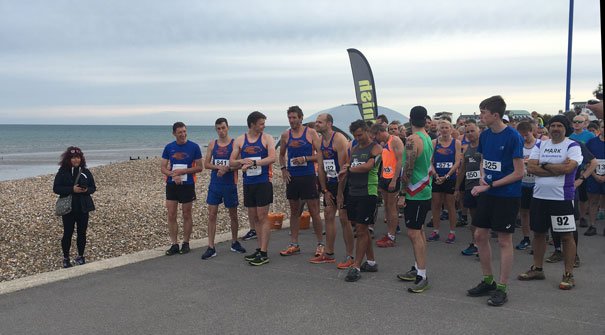 I got a good start, and managed to hold onto a position in the top ten at first. We had a bit of a tailwind so it felt “easy” with the wind behind me but I knew things would get worse on the way back.

The beach was actually in pretty good condition - much better than last year. There were no huge puddles of salt water to run through, the weed was minimal and only a couple of sections of rocks to navigate. Other than that it was just wet sand. Lots of wet sand.

There was some dry sand - for about 10 metres at the far turnaround point. I enjoyed that bit. I thanked the lovely marshals for drying the sand for me.

The turnaround seemed to come sooner than it did last year. This turned out because it was sooner - the course was made a little shorter for no doubt a very good reason (and not because I bribed the race director). I wasn’t complaining that’s for sure! This year I measured 4.7 miles on my GPS. Last year I measured 5.43 miles. The race is called “The Felpham Five” and we’ve averaged five miles over this year and last so there’s no reason for anyone to complain.

I managed to hold my position to the far turnaround and as soon as we started to head back (for 2.3 miles or so) I wished I wasn’t 6 foot 4 and running into a headwind. A chap from Horsham Joggers came past me and I tucked in close behind to get some draft off of him.

After a minute or two I felt guilty. So I accelerated past him and as I did suggested he tuck in behind. He did. We then took turns all the way along the beach, slowly catching up with a couple of runners further ahead.

Very near to the end you head back up the concrete ramp from the beach up to the promenade and then sprint (or continue running at the same pace) to the finish. I watched two other runners race off. I carried on pushing hard to the finish. 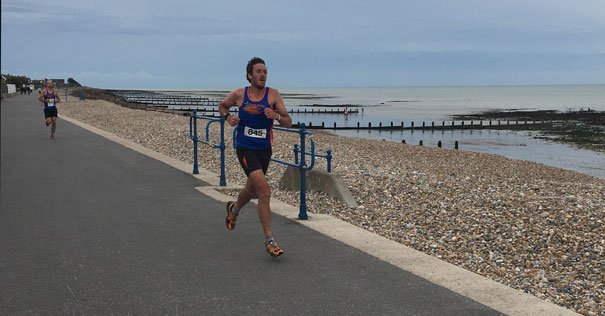 I got to the finish, was handed a Magnum ice cream and ate it in about 30 seconds. It was lovely. A quick change of clothes and then into the sailing club next door for a pint or two.

This is what races should be about. Highly recommended.

I finished 8th overall (out of 159 finishers) in a time of 31:25, with an average pace of 6 minutes 41 per mile. This was much better than I had expected to run, but I really did work hard for it, and have a couple of lovely blisters (on top of my Ironman blisters) to show for it!

See you next year!