Well. It’s been a long time since I blogged and an even longer time since I blogged about running a race. There had been much discussion (and many attempts by David and Kirstee) to get me to enter the Chichester 10k - I was declining and David told me he’d filled in the form for me! Next thing I knew my running number came through the post - and my tummy instantly felt squiggly!

Anyone that knows me and racing knows how much I dislike it. I get so so nervous. When we used to race all the time, it didn’t get any easier - I still always wanted to lose my breakfast. The last time I did the Chichester 10k was in 2007 - it was my second ever 10k and I did just under 66 minutes. I get nervous even before a parkrun, so this morning I was feeling pretty anxious about the race as I ate my breakfast. I’ve been running fasted for the past couple of years, so don’t know why I had breakfast this morning, it just feels like that is what you “do”.

When we had arrived and parked, we milled about a bit and I was very glad about my chosen running attire (shorts and club vest). We’d had a bit of a late realisation yesterday that my club vest was rather large now I’ve lost weight, so with some help from our friend Sheila, my vest was reduced in width significantly, so that it wouldn’t be exposing my bra! More importantly in the predicted headwinds, not causing extra drag ;)

The last few days I’d been thinking about my possible time for today. I’ve been reading The Competitive Runners Handbook again, just like in the Glory Year of 2007…and I decided that my dream race goal would be 9 min miling, for a 56 minute finish. My legs haven’t run anywhere near that pace for six and a bit miles since 2012, so I needed to tell them that was the plan. I told them that whilst David and I did our little warm-up job (combined with old school Ranelagh fast feet, high knees and heel flicks!). By now, we needed to get to the start line, so we walked up and David dropped me off at the front of the 55-60 minute “pen”. I fiddled about a bit more with my laces and then we were walking to the start line, chatting to Allen, Darren and Leigh. I heard the starting horn and walked faster around the corner to the start and we were off. 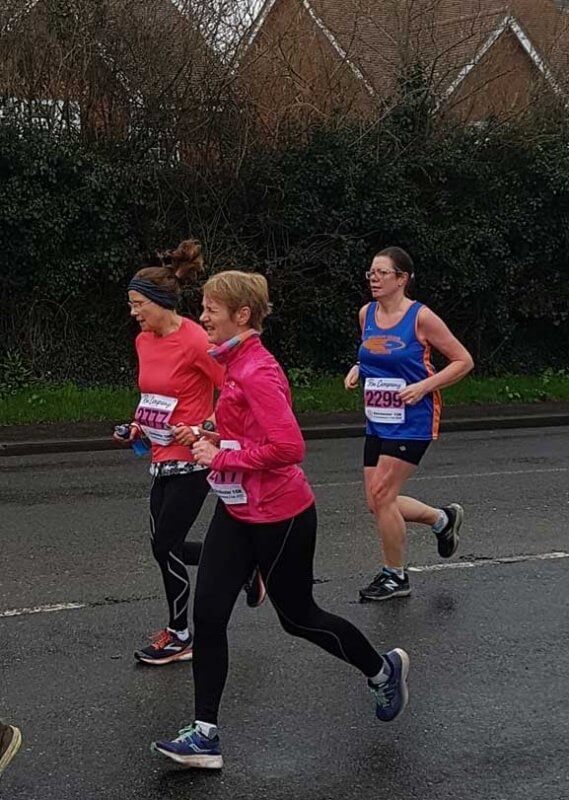 Sporting the ‘blorange’ (blue and orange) of our running club.

The first mile is slightly downhill and that combined with the adrenaline saw me going faster than my desired pace. Mustn’t go off too fast! Settled in, saw a few folk along the way that I know, ticked the miles off. I can’t actually remember much about the route - I don’t have David’s memory for such things - I do remember the man at halfway calling out times and I was at the 5km marker at 28 minutes on my watch. Exactly on pace for 56 minutes. There was a bit of an uphill after this, I looked at my watch and saw it said 30 minutes - I commented to a fellow Tone Zone runner near me that the leaders would have finished now. I just wanted to get onto Goodwood Race Track, as that’s just over 6km into the race. It’s odd to run around a motor racing circuit, it’s lumpier than you think it will be and it was rather windy in places. I tried to keep my concentration as I went around the track, as I know my mind often wanders off on the penultimate mile in a 10k. I was catching someone who decided that the race’s decision not to allow headphones then meant he would subject everyone around him to his music playing out from his phone on his arm. There were a few runners along the route who had chosen to ignore the no headphones rule who were also doing this. I find it so annoying. If you want music, find a race that allows headphones, please don’t subject me to your choice of songs.

Soon enough there was the 9km mark and I could see if I could up my pace slightly, I was still on track. So I dug in and chugged along and watched the miling pace on my watch fall. In the final straight I could hear David and Kirstee cheering me on - but my legs just wouldn’t go any faster. I crossed the line in 56:02 on my watch - hurrah! I got my medal, was greeted by David who told me how brilliantly he had done, found Kirstee and Allen and off we went for breakfast. Over breakfast, the results came in and my official time was 55:59, I must confess I had a little tear in my eye. I know it’s only running but I was so pleased with my pacing and actually managing to achieve my goal time was such a great feeling.