In this strange old time we’re living in races have been cancelled all over the world - one of them being the Ironman World Championship in the town of Kona, on the island of Hawaii. The IM Talk podcast that I’ve been listening to for well over ten years decided to keep the interest in the race going and do their own ‘virtual’ event on the same weekend.

Rather than do a full 140.6 mile Ironman they planned a Half Ironman 70.3 ‘event’. They’d organise some meetups on the Zwift virtual cycling platform so you could ride with some other people but apart from that you’re on your own - or with friends if you can rope any in!

I thought it would be a good little challenge and a nice way to use some of my fitness from the marathon I did the previous week.

The distances were as follows:

Seeing as though I last went for a swim in early August I felt that I was sufficiently tapered for the swim. I checked the tide tables and it looked like a sea swim would be on the cards - as quite frankly there was no way I was going to a pool (I strongly dislike paying for things I don’t enjoy!) so it was sea swim or nothing!

A Zwift meet-up had been organised for 9:30 on Sunday morning and part of the challenge was to try and do the event as a mostly continuous effort. I guessed the swim would take me about 40 minutes so planned to start at 8:30am. This would give me time to get home (2 minute walk from the beach!) out of my wetsuit and ready for the bike ride. I gave myself a little extra time in case of any issues.

Some tips were shared by the organiser prior to the day…

Compared to the filthy weather from a week before it was glorious. Porridge for breakfast and then down to the beach for my swim. I’d worked out how far I needed to go and for support I had Sharon and Kirstee strolling along the promenade and Allen out on a kayak - which was really good of him to do that. He’d be on great white shark watch for me. 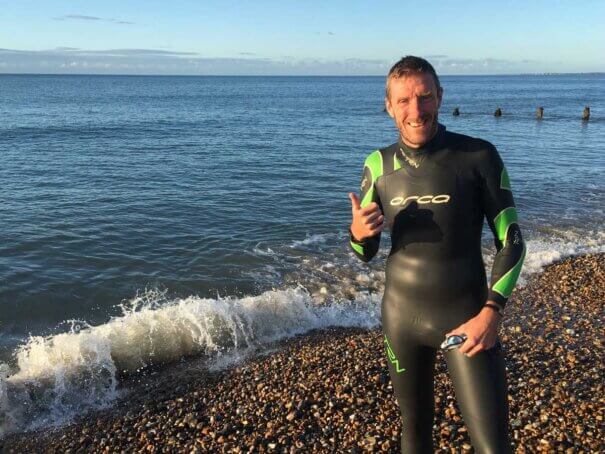 Apparently the sea temperature is just under 17 degrees c. It felt pretty bloody chilly when I got in that’s for sure. I did have a wetsuit on and a neoprene skull cap. I got in, dipped my head under and about 15 seconds later started my watch. 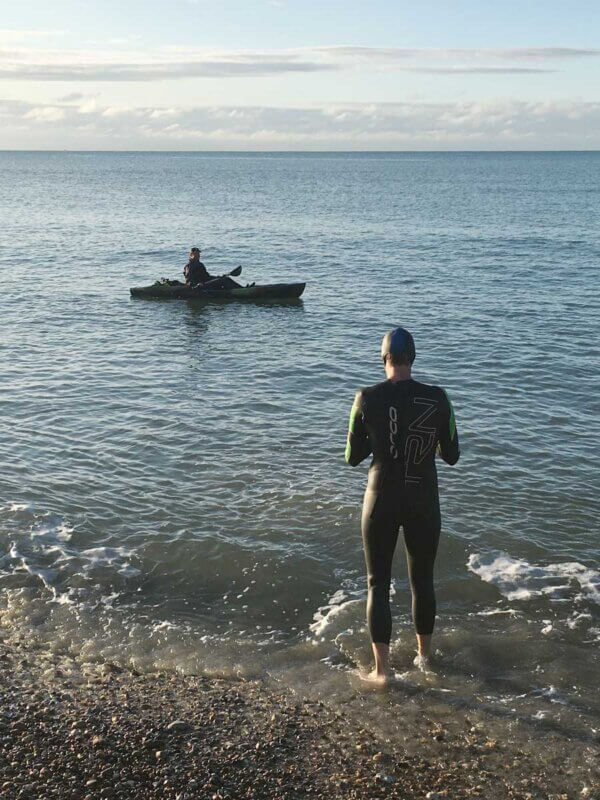 I put in a reasonable effort, partly to get it over and done with and also to try and keep me warm. My goggles behaved themselves brilliantly and never leaked or needed any adjustment. I just swam.

When I saw my watch get to nearly “1000” I was in the approximate turnaround position that I’d mapped out previously. I turned, and kept swimming. Conditions were ideal, although my feet and hands were pretty cold.

I got back to the beach with my watch saying 33 minutes and 5 seconds. I was very happy with that. I then noticed that my watch was reading in yards not metres! This is because I record cycling and running in miles, so it uses yards for swimming. It said 2,026 yards. That must be 1900m for sure. Either way that’ll do.

We left Kirstee to walk home and Allen to kayak home too - it was good to know he was there throughout the swim - especially when he pointed out that I was getting quite close to a breakwater at one point.

So… back home and into the pain cave - or in my case the garage. I got myself ready for the bike and hopped on for an easy warmup before the 9:30am start.

At 9:30am a small group of us set off on our 56 mile bike ride. The ‘meetup’ was setup so that we were the only people on the course - within a few minutes of the start everyone had separated and I spent the whole time riding on my own (in this virtual world!).

The longest I’ve ever ridden on the bike indoors is a little over two hours. This was going to take nearer three hours. The idea was to just put in a steady effort. The ride went really well and I didn’t find it boring in the slightest. Using Zwift there were climbs, descents, flat bits, plenty of variety and you have to change gear on the bike to respond to these changes. I also watched a few videos on a second screen. 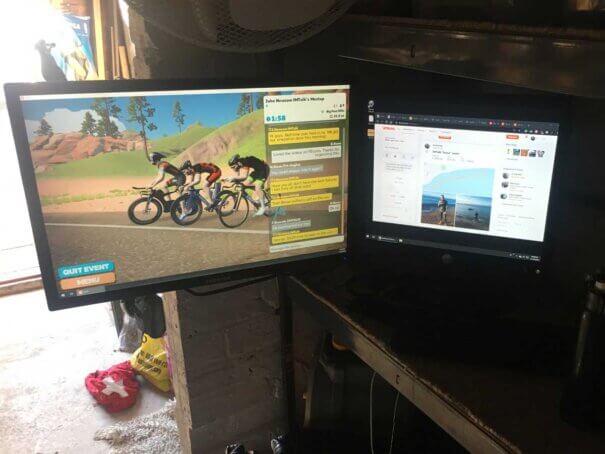 I rode the 56 mile route in 2 hours 44 minutes. During the ride I drank two bottles (1.5 litres) of sports drink and had four energy gels. And a couple of cups of coffee early on to warm me up! 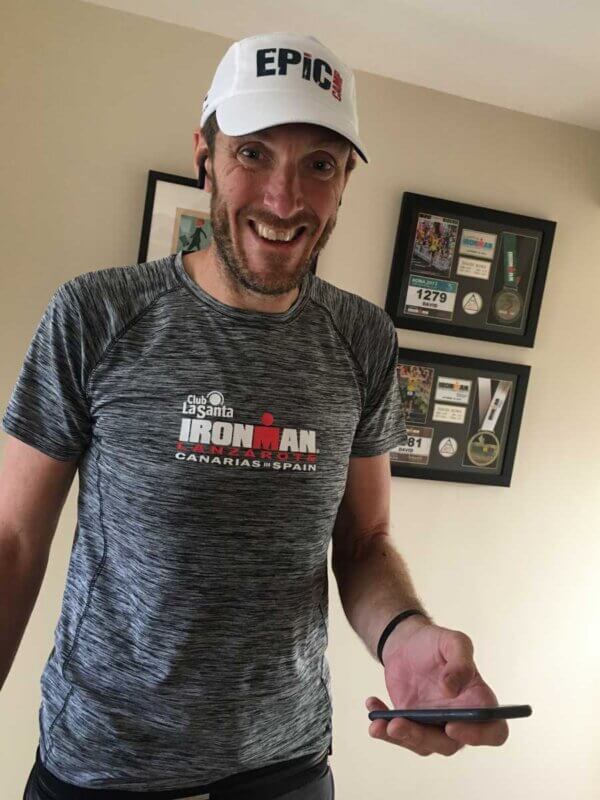 As soon as the bike was finished it was time to get into some running kit and out the door for a half marathon. My ‘transition’ took about five minutes.

For the run I took a bottle of sports drink and an energy gel with me. I headed towards Littlehampton along a quiet cycle/footpath near us.

I have a habit of going out too fast on a run. Today was no exception. I did feel great for the first mile. The second mile I felt OK. The third mile it was tough. And so were the next ten! Will I ever learn?

About a mile of the run was on Littlehampton seafront. Which at 1pm on a lovely autumnal Sunday meant it was heaving. Plenty of weaving around people was required. Before long I’d turned around and was heading back home. I just pushed on.

For entertainment I listened to a soca music playlist on my phone. At full volume! It was like a party. But without the alcohol and fun that normally goes with it!!!!

About a half mile from home my watch told me I’d done the distance and completed the half marathon - so it was time to stop! I’d pushed a little harder towards the end (just to get it over and done with!) and stopped my watch with a time of 1:41:32. It actually took me about a minute longer because of stopping for traffic at a couple of busy road junctions. 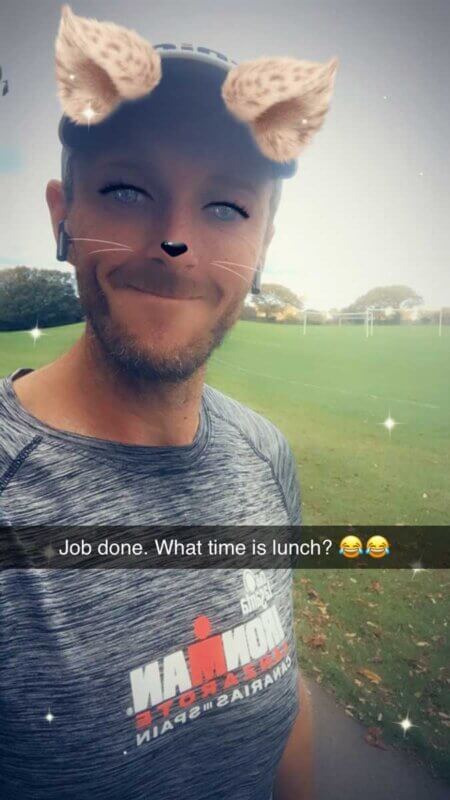 This was the most exercise I’ve done in a long long time. I took it all pretty steady and if I add up the approximate times… 33 minute swim, 2:44 bike and 1:42 run - this gives five hours exactly. Ignoring transitions and that this was a steady effort and not a full on race by any stretch of the imagination I’m very happy with this.

I earned my full roast dinner that evening that’s for sure.

I’ve only done one ‘self supported’ Half Ironman before, and that was my first ever one - back in May 2008!

What’s next… another Ironman… No! Not anytime soon that’s for sure. I just plan to tick over with a bit of cycling and running, that’s all.