This is my 14th time running this event. I last blogged about it in 2016 but did run it in 2017 and 2019. I’ve no idea why I didn’t blog about it those years - I remember in 2019 it was a week before Ironman Lanzarote so I was probably excited about that race to write about a 10k!

2020 and 2021 were cancelled due to the pandemic so my entry from 2020 was deferred until now. Whenever anyone over the past couple of years has asked me if I’m training for any races my reply has always been “yes, for the Bognor 10k.”

Prior to the race (I’m writing this bit a few days before) my aim is to go under 40 minutes. That ‘should’ be very achievable as I’ve been running really well over the past few months and have recently got new 5km personal bests at the Bognor Regis parkrun - which I’ve been running regularly since it started in May 2014. So… if the conditions are good I think I’m going to aim for something closer to 39 minutes and just see what happens. If it’s feeling easy at half way then I’ll push harder in the second half but if it’s not my day then it’s just not my day and I’ll try and stay just ahead of the 40 minute pacers.

Either way I’ll just be happy to be out running my favourite running race.

Race day arrived and the weather was perfect - clear blue skies and a light wind from the South East - meaning a mostly side wind on the last 4k along the prom. This is exactly what I was hoping for.

We cycled to the start, got up on stage for the Bognor Regis Tone Zone Runners team photo (over 90 of us taking part this year - with many others volunteering on the day). I went for a bit of a warm up for about 1km and then after yet another wee I was ready.

I’d been thinking more about what to aim for and I was thinking I should just go out hard, aiming for something like 19:15 at half way and then if I kept things even then I’d finish in 38:30. That would be a superb time for me and my best 10k since 2012. Training wise I’m running around 19 minutes for 5k (managed a couple of parkruns just under 19 minutes on our ‘slow’ twisty-turny course at Bognor). But could I do two fast 5k’s back-to-back? I’ve done a couple of faster warm-ups before parkrun recently so I don’t think it’s too far fetched. Time to give it a go then… 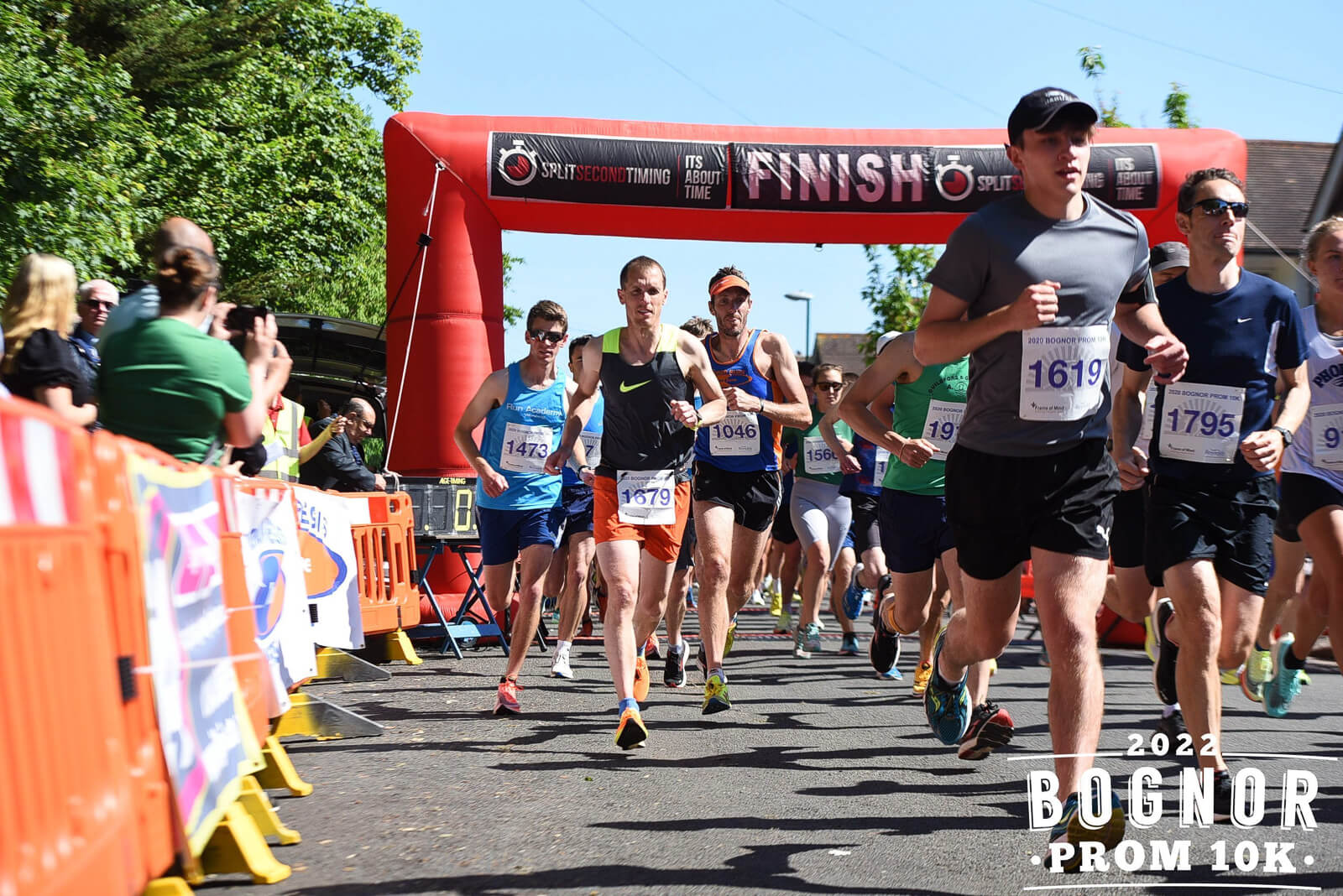 So… the target is 6:07 per mile. My first mile was 5:54. Oh dear. I felt good though and had to try and reign it back in a bit. Obviously I felt good as it was only the first mile. I kept fellow Bognor parkrunner Tamas in my sights - he was about 10m ahead of me. I couldn’t get to him to run behind him (he’s pretty tall and would provide a good draft) so had to jump on the back of people who drifted past me as best I could.

The on course support was superb as always and the cheers you get whilst wearing the local running club colours is worth the annual membership in itself! So much so that after about 1.5 miles and having heard constant shouts of “Go on David” I mentioned to the lady running beside me (who finished 3rd female overall) that “You may have noticed that this is my local race. Sorry!” She thought as much! And then ran off into the distance. 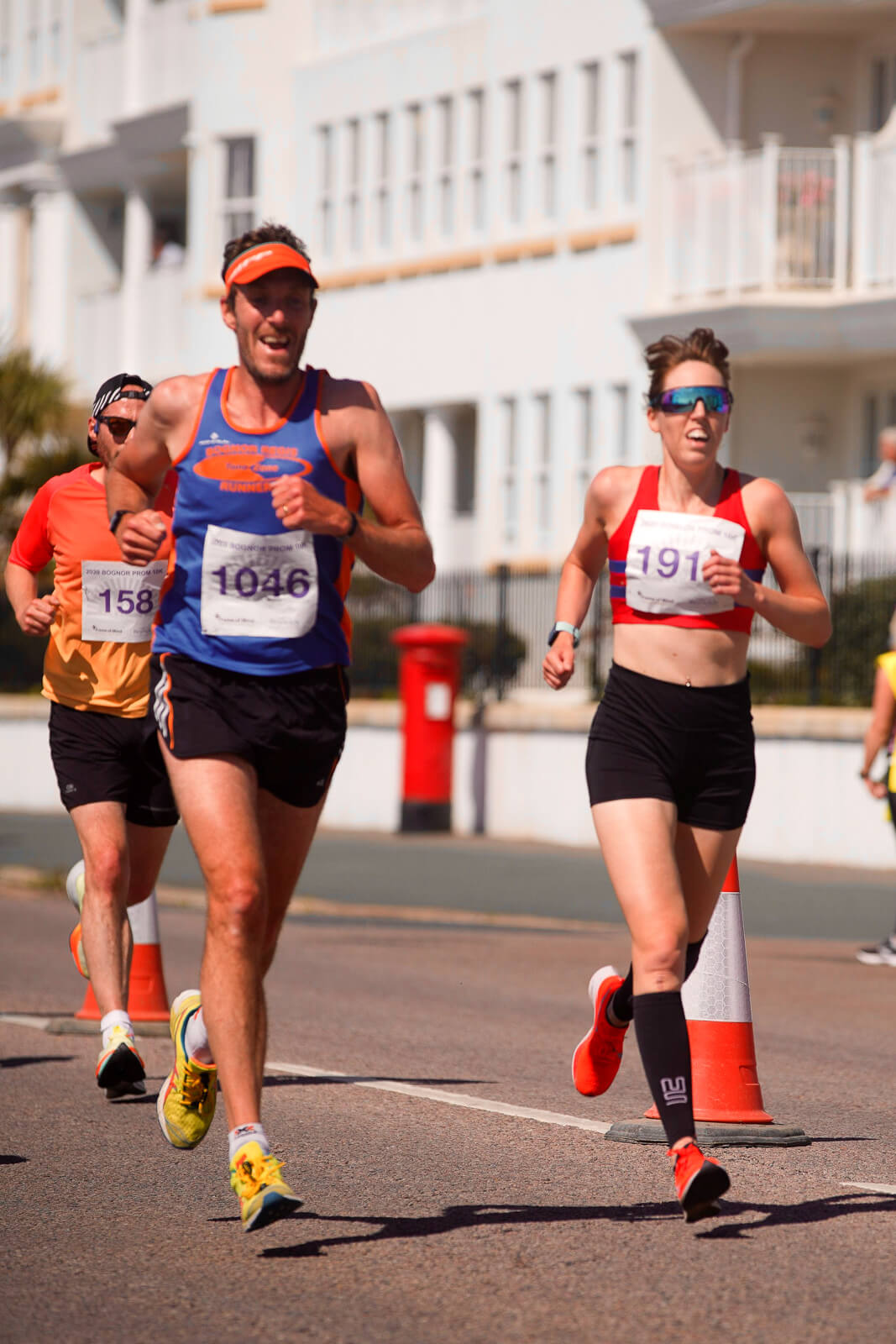 Was I slowing down already?

At about 3.5 miles you turn back onto the promenade for the long slog home. And it was a long old slog. Running along Felpham seafront (and earlier through the village) was lovely as always and post Covid and with lovely weather the crowds were out in force - it really helped. 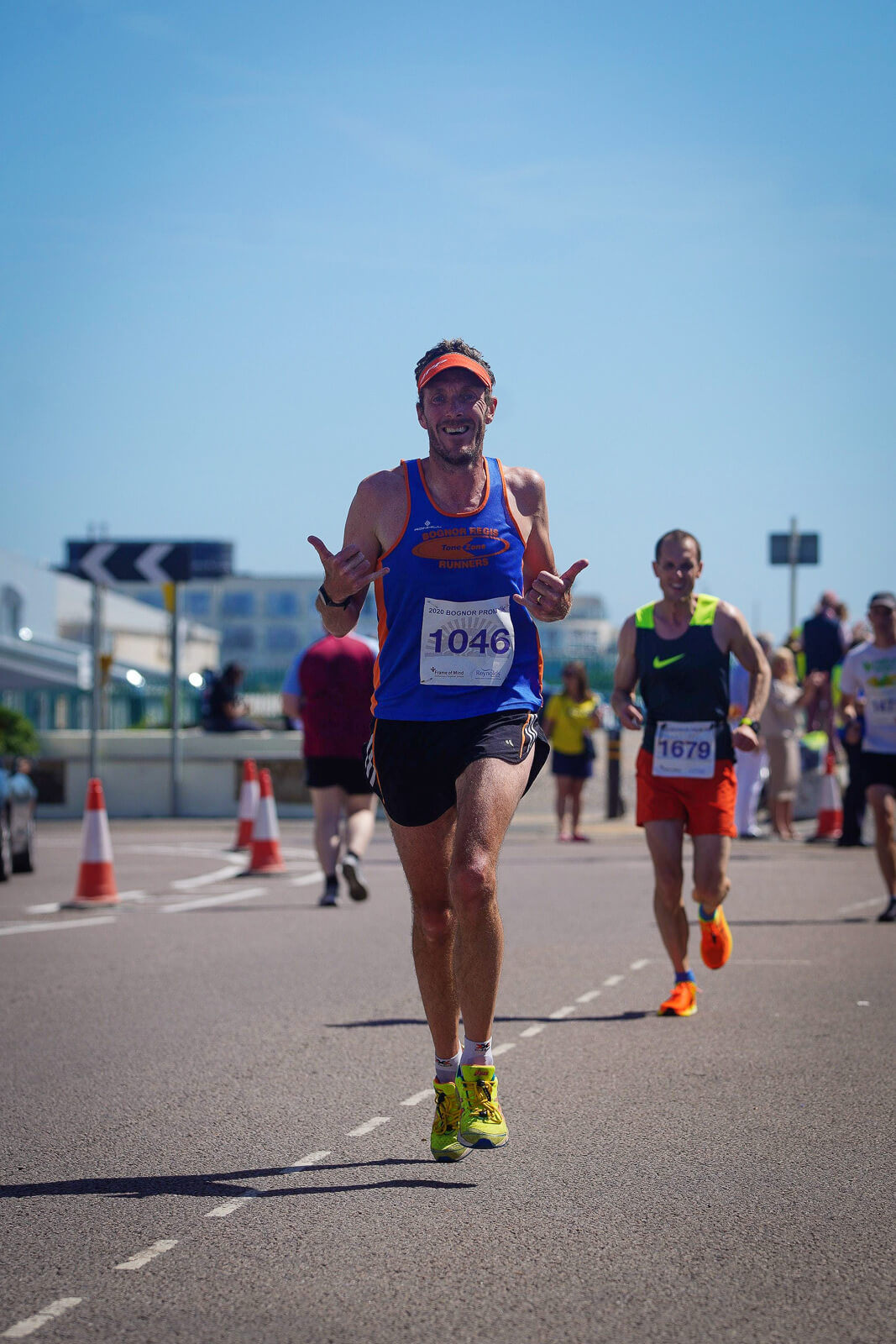 My pace was slowing and I had to fight to keep it up. Maybe I could just get under 39 minutes - my target had been adjusted.

At about 400m to go another friend (Callum) came up beside me and in-between mutterings of recovering from Covid (he ran 37:30 in 2019) he said he had no sprint in him today. I replied that neither did I. We pretty much ran neck and neck to the finish.

As I turned the final bend my watch said 38:40 and I knew I didn’t have a hope in hell of getting to the finish in 20 seconds. I pushed on as hard as I could and crossed the line in 39:09.

I would have loved to have dipped un 39 minutes but today wasn’t the day. A combination of no focused 10k training and averaging about 20 miles per week over the past four weeks no doubt didn’t help my cause. Together with not the greatest pacing didn’t help either. But that’s OK - I can live with that. There’s always next year.

On a more positive note I calculated my age grade to be 75.2% which is pretty much exactly the same as my run in 2012 - where I finished in 36 minutes 44 seconds. So in theory I’m running just as well as I was 10 years ago. I’m happy with that for sure.

Following the race we headed to Bognor Regis Sailing Club for a couple of pints and then cycled home (for some more liquid refreshment).

« My 'most run parkrun' has now changed
© David & Sharon Rowe - rowerunning.co.uk - email me