By David on 10 May 2009 david parkrun sharon triathlon 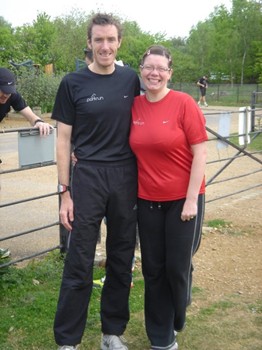 David and Sharon before the start. Photo by Roger Wilson.

9 May 2009 saw the first running of another new parkrun which is local to where we live. Bedfont Lakes parkrun is held at Bedfont Lakes Country Park in South-West London and is extremely well suited to people like myself (triathletes) as it is organised and takes place right over the road from a great open water (lake) swimming venue.

In 2008 I posted a bit about Princes Club, where I do some open water swimming. With the arrival of a new parkrun held litterally a minutes walk from lake this is perfect for me (only during the warmer months though!). After getting up very early (which is no surprise in our household) Sharon and I headed to the lake (me swimming, her spectating). I swam for around an hour (3km - which is only just under 800m short of a full ironman distance swim), got changed out of my wetsuit and then off to the parkrun.

The parkrun itself was great. I’ve run four of these now (Bushy, Brighton, Richmond and now Bedfont) and course wise this is a nice little interesting number. There’s a few twists and turns (a very sharp turn at one point) and its a two lap course. Shortly after the start is a bit of a hill which makes a pleasant change from running at pancake flat Bushy parkrun most of the time. I’d say in order of difficulty this is closely matched to Brighton - its not quite as hilly but the surface isn’t as good as Brighton so I’d match them pretty closely.

There was a great turnout at the first event, with a number of regular parkrunners making an appearance. I was happy with my run and came seventh (out of 60 finisher) with a time of 19:49. After taking a wrong turn on the second lap I lost about 45 seconds so would have been just over 19 minutes had I not lost my way! Doh!

Over the next couple of months at least I expect to run here fairly often on Saturday mornings after swimming. Bedfont Lakes - welcome to the parkrun family.