A couple of weeks ago Sharon and I decided to enter the Chichester 10k. Well, I thought it would be a good idea and whilst filling in my entry form filled one in for Sharon as well.

I ran the race last two years ago (I don’t think I blogged about it) when I did a number exchange with a friend who was injured. I had a good run, my time was 42 minutes exactly and my training log said “Tired legs, cold, windy. Very happy with the time.” The tired legs were due to training for the Brighton Marathon at the time (which all went wrong when I got injured the day before the race).

Anyway, fast forward to today. When I woke up this morning and heard the wind howling outside I was wondering why I was planning a 10k race rather than going out windsurfing. Oh well. We collected Kirstee (injured) and Allen (coming back from injury) and headed over to Goodwood Motor Circuit which is the base of the race.

After standing around chatting and going to the toilet for an hour we had the Bognor Regis Tone Zone Runners team photo and then decided to do a warm up and shoe lace adjustment.

I’ve been hovering around or just below 20 minutes for 5k recently (on the twisty Bognor parkrun course) so thought I should aim for 40 minutes and just see what happens. I should be able to get a good way round at that pace - whether I’d manage to hang on to the end was much more of an unknown.

Where we were hanging around before the start Sharon noticed someone we know (Mike H.) was an official pacer for the race. Turned out he was going to be running 40 minutes. Sharon told me to just run with him. Simple.

We headed to the start, the start gun went and in a congested first mile or so I settled into a pace. The pacers were right there with me and I just stuck to them like glue - close enough to hear all their casual chatting (which was fine by me) and a running commentary of every lump, bump, turn, headwind, kilometre marker and little man shouting out times at halfway. I kept within about 10 feet of them throughout.

KM markers were at, er, each kilometre and as I’m good at my four times table I was able to work out if I was on pace (10 x 4 minutes = 40 minutes). I looked at my watch probably 6 or 7 times during the entire race. We just locked into a pace and got on with it. Into a headwind it was tougher, but with a tailwind it felt ever so slightly easier.

There was a little group of people who seemed to be in this pace ‘group’ and we swept up a few others (and at the same time dropped some more) during the early miles. I just stuck to them like glue, ticking off the kilometers within a handful of seconds each time.

At about 6km I remember Mike say something like “stay strong everyone, a slight uphill ahead” or words like that. I replied that it was just me running with them. We seemed to have lost everyone else.

As we neared the motor racing circuit (the final two miles or so are run on the circuit) I was asked my goal for the race. “Sub 41 was the the first goal. Then it was to hang on with the 40 minute pacers until I reached the racing circuit. Then see what happens”. 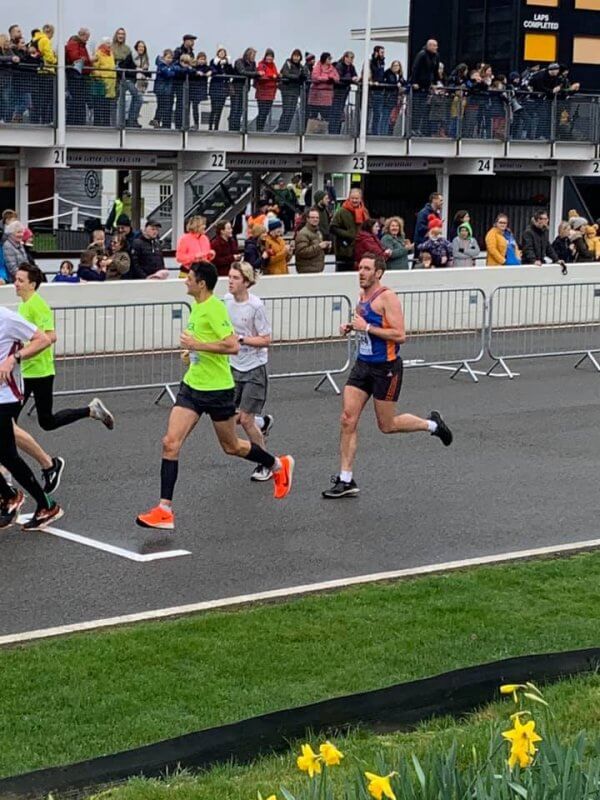 At the start of the motor circuit lap - stuck like glue to the two 40 minute pacers.

Although it was quite a breezy day we were sheltered from lots of the wind by hedgerows. However when we got to the motor circuit I knew we’d be more exposed to the elements. It was good to have a few tall people around me and I suggested that we all line up in height order. Normally in races where I want to draft off of people I end up following a 4 foot 6 ex-horse racing jockey! When you’re tall like me that doesn’t help.

I fully approved of the height of the pacers today.

Running round the track we absorbed a few other runners into our ‘group’. Some stayed, some didn’t. I just hung on in there. Eventually we reached the far corner of the track and from here it’s all slightly downhill, with no annoying wind until you turn for the final straight. I was still on course to get under 40 minutes so just pushed on. My speed increased slightly along with everyone else around me.

The final straight was into a headwind but I just got on with it, crossing the line in a little under 40 minutes.

Normally the only 10k I run in a year is the Bognor 10k in May. My ideal race would be to run under 40 minutes. I’ve managed to tick that off. I’ll still stick with aiming to go sub 40 again this May. Perhaps nearer the time if training is going well (or not well) I’ll re-adjust my target, but for now that’ll be the goal.