Ironman Switzerland - The Day After 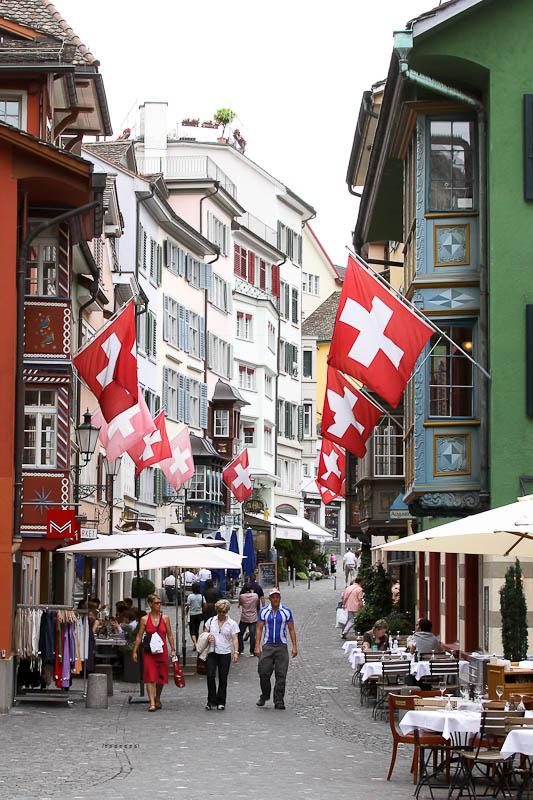 Once again, if you’ve not seen/read the other posts from Ironman Switzerland 2009 then here’s the links:

So, Monday morning and I was expected to be unable to walk, just as I was the day after the London Marathon in April - but today, this was not the case. I actually didn’t feel too bad. I could walk up and down stairs (albeit slowly) but nothing like I was in April. I’m guessing this is related to everything being just a little slower on the day (the aim isn’t to destroy your muscles - just use them for a long long time) and also the large amounts of training that I’d put into the race.

After a hearty breakfast (with many of us still wearing our finishers t-shirts) Sharon and I headed on a tram into Zurich to have a little look around. 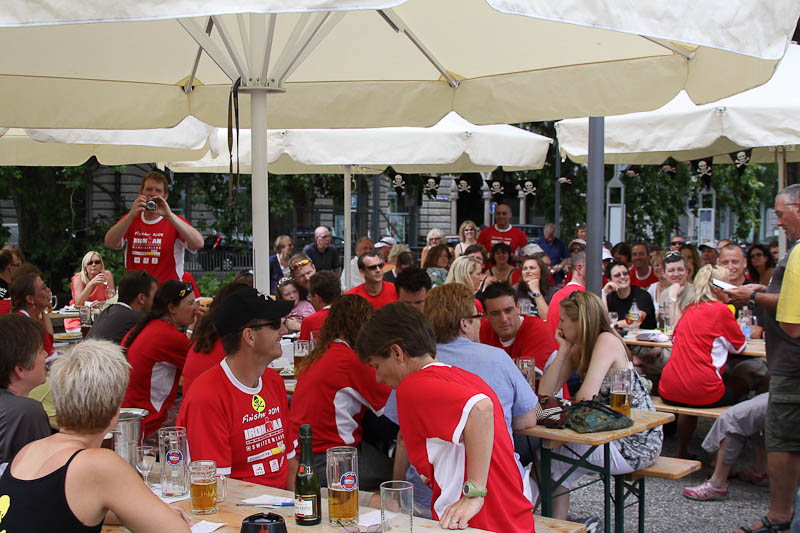 Just a few of us at the bar…

After a pleasant stroll around the town it was time to head to the official Pirate drinks and prize-giving at a bar/restaurant right by the lake. This is a ‘gathering’ organised by the Pirates that has been held the day after the Ironman for everyone to relax, socialise and give out a few prizes.

I tried to count everyone there and lost count at about 115. Lets just say it was busy. Everyone there was part of the Runners World ‘Pirate’ group and was either a competitor or supporter. We had mums, dads, children and friends there in addition to the 52 of us who completed the distance (and the five that unfortunately didn’t complete it). It was a sea of red (finishers t-shirts). 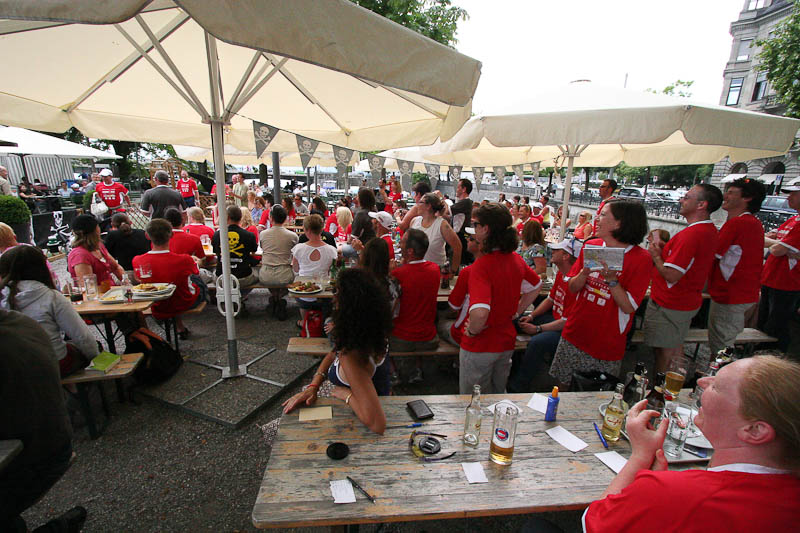 In between plenty of drinking and eating there were prizes handed out - many of the winners as voted by us. It was very organised - pieces of paper to vote on, and people to count the votes and dish out the prizes. There were prizes for categories such as ‘Best Quote’, ‘Campest Run’, ‘Most Smiley’, ‘Best Supporter’ and ‘All The Gear, No Idea.’

In addition to these ‘silly’ prizes there are prizes for ‘Best Novice’, ‘Fastest Finisher’, ‘Fastest Chick’, and ‘Best Improver’ (or ‘not nearly as crap as last year’). The ‘Best Novice’ award is voted by everyone and isn’t based on speed - its based on being the most ‘Pirate-ey Pirate!’ This was presented to Nicky - and was well deserved. 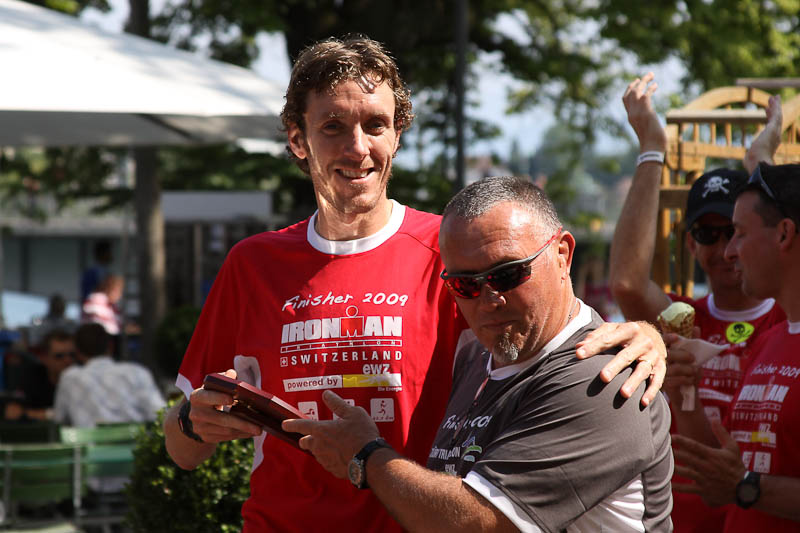 David being presented with the Best Performance shield.

For the Fastest Finisher prize this is where I was called up. Of the 52 Pirate finishers I finished 6 minutes ahead of the next placed Pirate - so was presented with a lovely wooden shield which I shall treasure for the next 12 months. I felt honoured to have won this - especially with some of the other names on the trophy and I had to make an acceptance speech when I was called up to collect it. What a great way to top off a fantastic weekend. 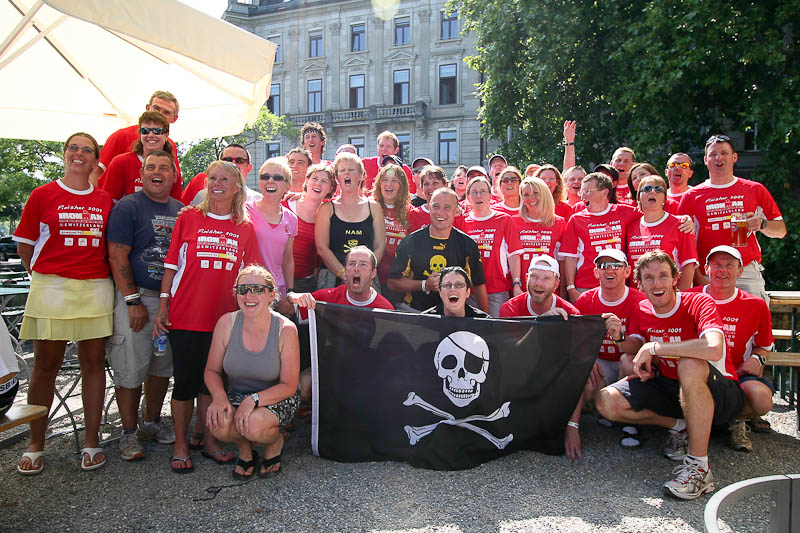 Most of the Pirate competitors from Ironman Switzerland 2009

Once the prizes had been presented, we continued to talk, drink and eat and a few hours later Sharon and I decided to walk back to the youth hostel via the waterfront - which was where some of the previous days marathon route was held.

After a while we ended up at the Ironman ‘village’ area - which was being dismantled - and here we took a few photos - with this one of the finish line gantry looking very different to how it was 24 hours beforehand. 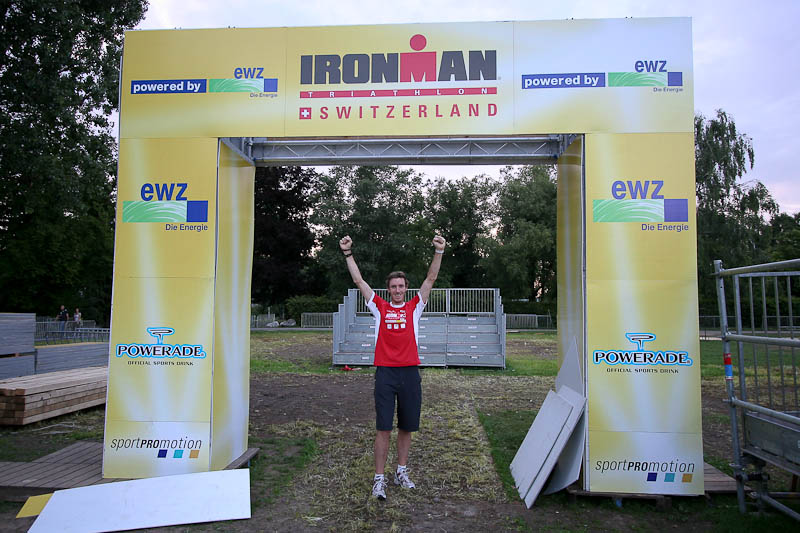 Ironman Switzerland 2009 - The Day After

After grabbing some food and a drink back at the youth hostel bar it was off to sleep.

Tuesday was our final day in Zurich and the plan was for an easy day. After breakfast I squeeze my bike into its bike box, we checked out of the hostel, put our bags in storage for the day and set off to do very little. We went to the lake, had a swim and the boys had an impromptu ‘lap of the island’ running race - which was interesting my legs were (unsurprisingly) still a little sore from the activities of 48 hours ago. 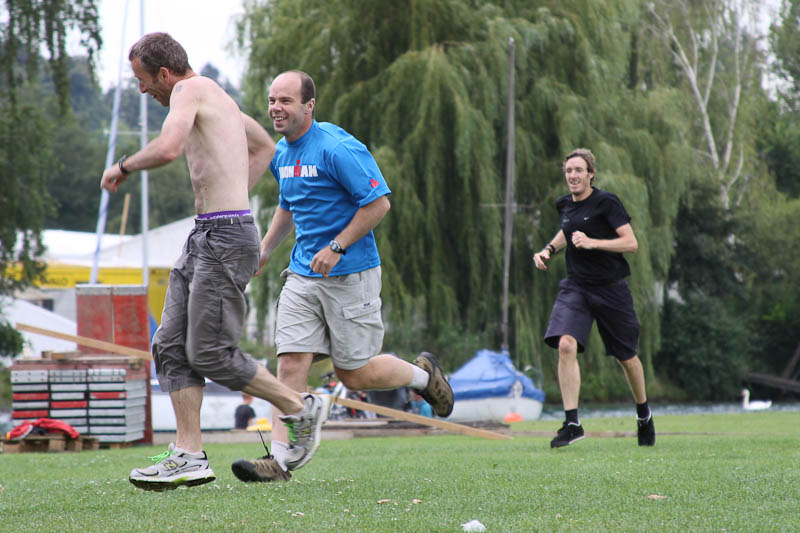 Pete, Stuart and David at the end of the ‘race’ (the others cheated!)

We then headed off for lunch and then to the airport and back to reality. Ironman Switzerland was a fantastic race with a great atmosphere and it wouldn’t have been anything like it was had it not been for the Pirates. I really wouldn’t fancy doing my first (or any) Ironman race on my own (with just a ‘sherpa’ for company) - these guys and girls are amazing and made the event one that I will never forget.

I always said I was never going to do an Ironman. Ooops! I then said I’d never do another. Ooops again. I’ll post more about that in the next few months, as I’ve got 12 months to prepare for it!