OK, so it’s about a month after Ironman Switzerland and it’s still on my mind. It was a massive event for me - which took up most of the first six months of 2009. Long bike rides, lots of running and very early mornings swimming in the local lake.

The last month I’ve been trying (with limited success) to catch up on things and here we are nearly at the final blog entries about this race. If you’ve not read any so far, then here are links to what you’ve missed:

After I finished the race, got myself hydrated, fed, phoned my mum and dad and generally walked around with a bloody great smile on my face it was time to get supporting the rest of the pirates out there on the course. There were plenty out there and I wanted to help push them towards their own ‘victory’ for the day. 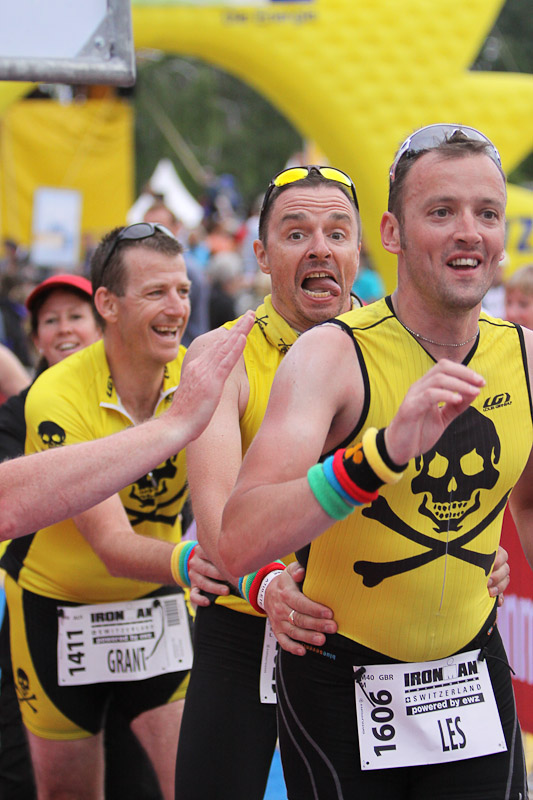 Les, Drew and Grant doing the conga in the finishing chute!

Standing in the supporters stand near the entrance to the finishing chute was great. You’d watch people run past you, go round the little turnaround point and head back. At this point you were checking their wrists to see if they had the elusive ‘red’ wristband, which meant they were about to finish.

Some of the pirates were able to run parts of the course together which they said was great for support and to help them through those tough moments - so much so that one such ‘gaggle’ (or whatever the collective term for pirates is!) were able to conga, yes, conga up the finishing chute! 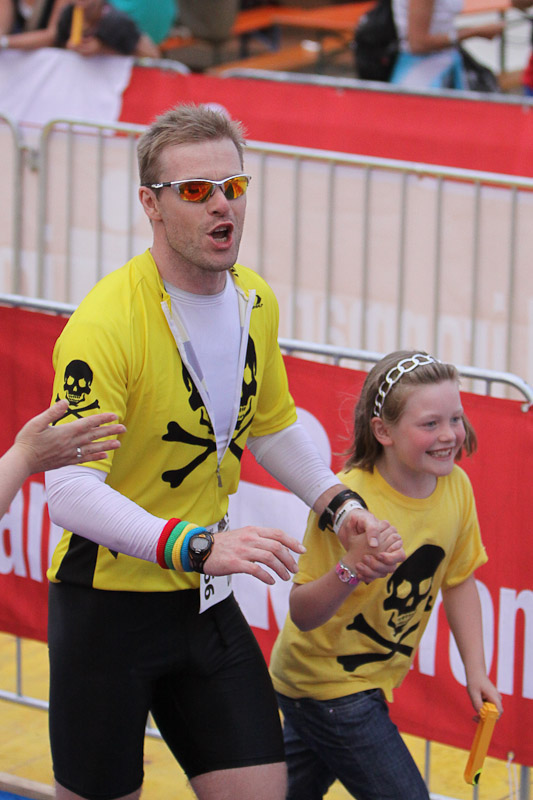 Brian heading down the finishing chute

Brian looked chuffed to bits when he finished - running along the chute with his daughter. I love this photo.

As the evening drew on I really started to appreciate how tough it must be for the people still out there. Here I was, all showered, massaged, fed, re-hydrated (with water/coke, not alcohol - yet) and standing around cheering when all around me were people finishing, and others with one, two, three laps of the run remaining. These competitors require massive amounts of willpower and mental strength to get them to the finish line.

As the day turns to night the finishing area plays host to the ‘Ironman Finishers Party’ - from 9pm until the cut-off at 11pm (that’s 16, yes, 16 hours since the start of the race).

Loud music, cheerleaders, flashing lights, and an all-round great atmosphere to greet the finishers. We had a few pirates still out on the course and as each one came in to finish, the cheers and screams of support got louder and louder. It was amazing. 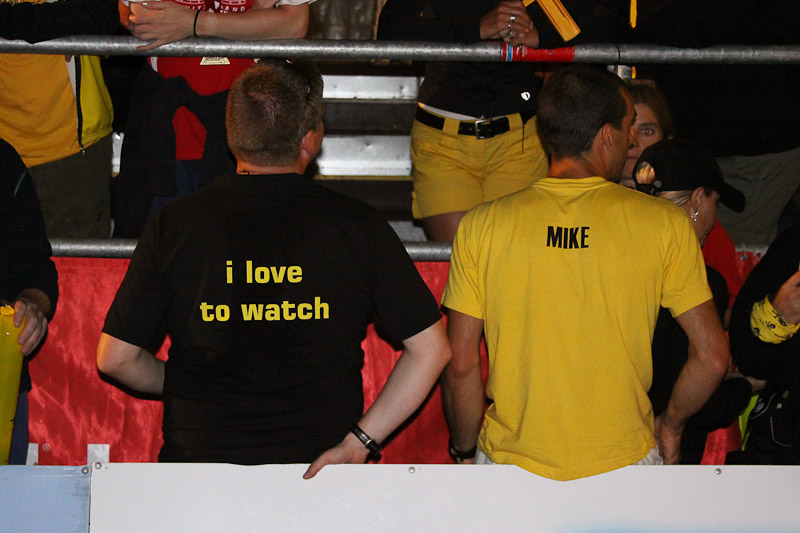 Ironman isn’t a knitting club - its hard work and a combination of training and unexpected issues (bike failure, stomach failure, that kind of thing) mean that problems can happen to anyone. Someone I know was once told “When you’re at the start there will be people around you who haven’t trained enough but will finish, and there are others who have trained and tapered to perfection but the day just doesn’t turn out as planned. 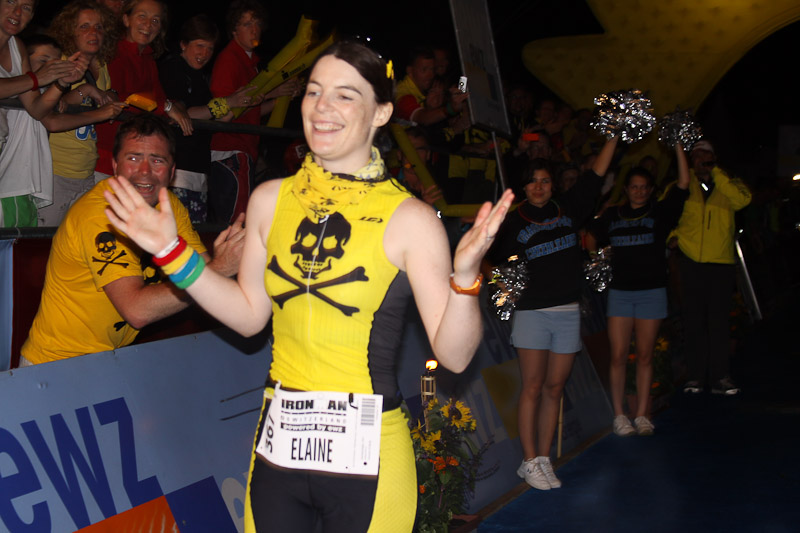 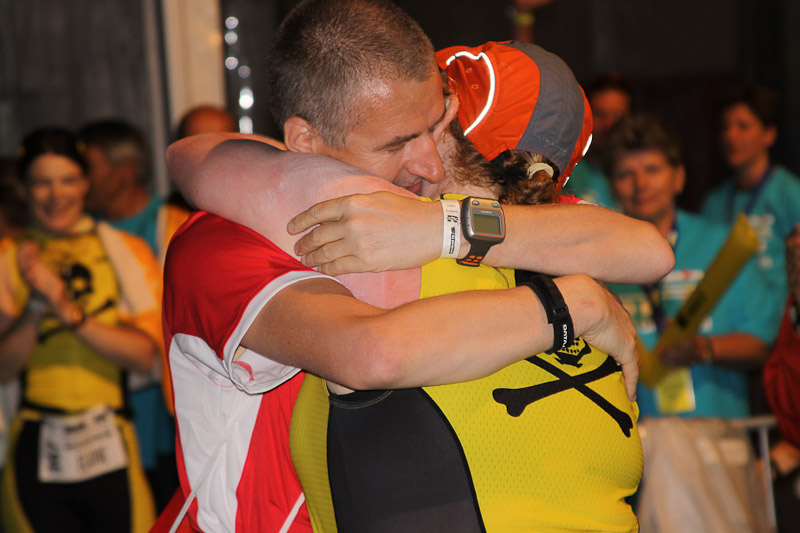 Nicky being greeted by her husband at the end of a long tough day. Superb stuff.

There were some fantastic emotional finishes amongst the pirates, one of them being Nicky. As she headed over the line after 15 hours 37 minutes she was met by her husband for one hell of a hug. It was brilliant.

Five minutes later Debbie came over the line, together with her husband, with tears of delight in her eyes (and down her cheeks!).

You couldn’t help but get ‘smoky-eye syndrome’ being a part of this. 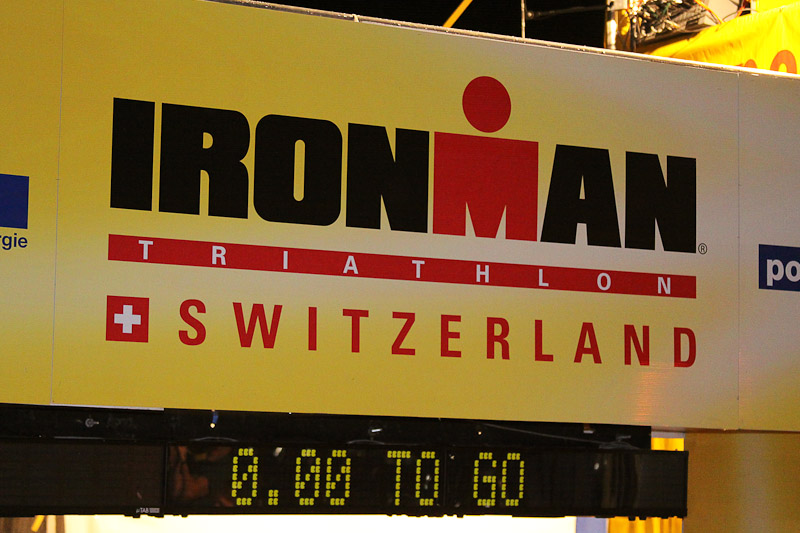 This is it - zero seconds to go. 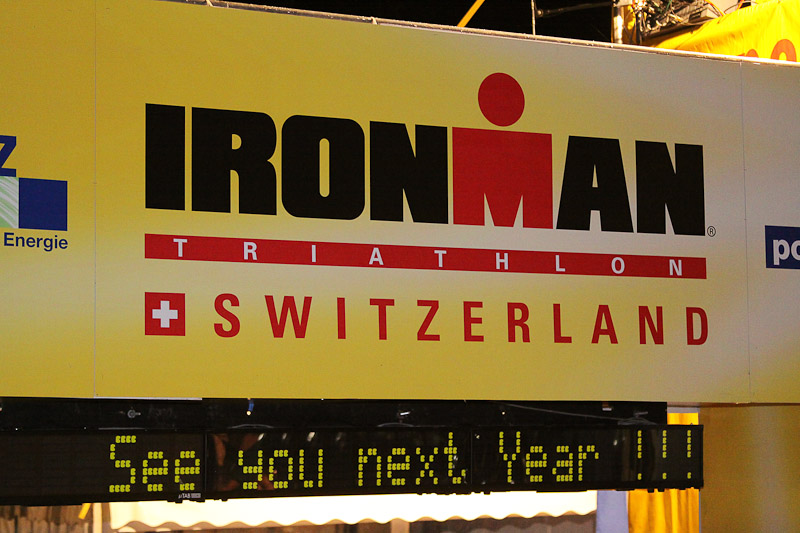 See you next year

Shortly after the timer reached zero it all drew to a close. The pirates slowly drifted away. A few of us went to the transition area to collect our bikes that had been there for many hours since the end of the bike leg.

From here it was a walk back up the hill to the youth hostel and a bloody well earned pint from the bar. We all had our finisher t-shirts and medals on and this was it - we were Ironmen.