In 2009 it was suggested that a social run around the Bushy parkrun 5k course a few weeks out from the London Marathon would be a great little motivator for those long runs and also to get to share a long run with people who are running different distances - so not just for the 20+ miler club! Not The London Marathon was born! You can read about the2009,2010,2011,2012,2013and 2014events elsewhere on this blog.

The ‘rules’ are as follows…

This run is a great social gathering and perfect for those in training for spring marathons as it’s right in themiddle of most big long run training schedules. My training hasn’t been going quite to plan for the past few weeks which I’ll get around to posting about soon so I came into the run planning on running either two or three laps (a total of 10 or 15km). That would be plenty enough for me.

We gathered for the customary group photograph and I said a few words along the lines of ‘Thanks for coming. Please be friendly and if you come away from today having had talked to someone who didn’t know beforehand then it’s served it’s purpose.” We then set off a couple of minutes after 9am. The weather was bright, a little breezy and not particularly warm. 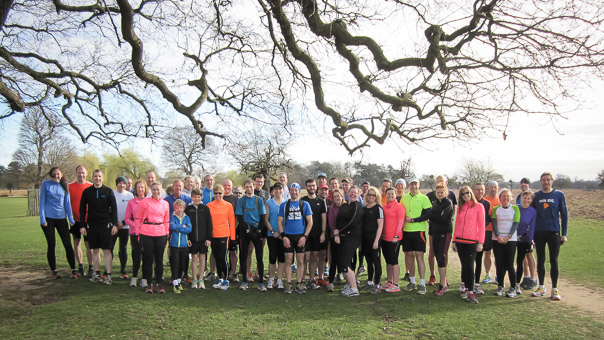 The numbers were down on last year (we had about 50 this time around) and part of this was no doubt to do with the date clash with other events such as the Richmond Trail, Fleet and Reading Half Marathons. It’s a tricky one trying to find a clear date in the diary at this time of year so there’s pretty much always going to be a clash somewhere.

I ran. I ran a bit more. I found myself at one point amongst a ‘mob of Pauls’ - Sinton-Hewitt, Duke and Warrington (all heavily involved in the recently released parkrun book) and also good friend Hayden. We ran, we chatted, we smiled and said hello to runners we know doing other (yes, other!) runs in the park and generally just had a pleasant little run.

Sharon did just under 10k, I managed 20k (that wasn’t the original plan but the company of Katrin and Rodney made it easy to add an extra ‘lap’ at the end) and then after a rather inelegant change of clothes in the car I headed to the growing number of us sat by the ‘big tree’ and enjoyed a chatter and a bit of a picnic.

Having moved away from the area over 10 months ago I’ve run in Bushy Park perhaps three times. I do miss the place. I certainly miss the people but this makes catching up more special. I’m just happy that down where we live now the running community is thriving and just as friendly.

After running for just over 1 hour 45 I proceeded to relax for nearly three hours post-run with the gang. It was lovely, it was cold, we laughed, we cheered the other runners still going (some managing 20+ mile runs) and generally had a good old time.