Each year along with many other people we like to look back at the previous years training and racing. I’ve done it on this site since 2007 so this is my eighth annual summary. Well, there’s good and bad to it so lets get cracking…

The year started with a plan to run the London Marathon in April and get a ‘Good For Age’ time that would guarantee entry for the next couple of years. I had a bit of a dodgy right calf in the lead up and after running a steady 20 miler in mid-March I knew my training wasn’t where it needed to be so I deferred my marathon entry until 2015. I’ll aim to have a go in April of this year but if I don’t make the start line then so be it.

In May after 19 years of living in South-West London we sold our house and moved down to the seaside. This was the highlight of the year for sure. We’re now in a beautiful house that’s less than two minutes walk to the beach and I’ve got my old windsurfing kit out of retirement and been out on the water again. I did a few sea swims as well and plan to do many more in 2015. 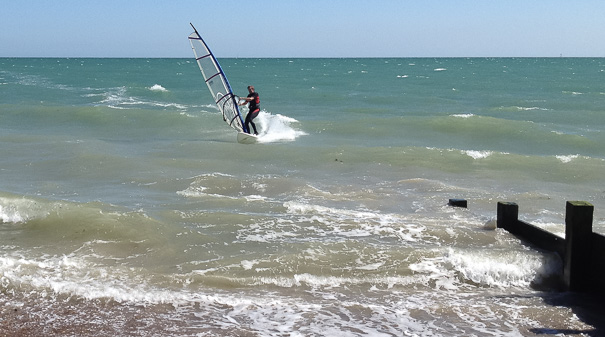 Three days after moving a new parkrun started at Bognor Regis - a mile from our front door. The run is great, the people even better and I’m so happy to have such a great community event on our doorstep. Loads of new friends have been made. Speaking of parkrunning - in March I accompanied and helped pace a lovely 11 year old young lady to almost breaking the 20 minute barrier at Bushy parkrun and in July I ran my 300th parkrunat Bognor.

Ironman Francewas next on the list at the end of June and once again the lead up into the race wasn’t great. My longest run was back in March and I’d been ticking over since then with a couple of longish runs closer to the race. I put in an acceptable swim, a pretty reasonable bike and surprised myself with a 3:42 marathon to get yet another Ironman medal for the collection.

August was going to be an interesting one. I’d signed up for Epic Camp Canada. 12 days of crazy swim/bike/run volume as we rode across the Rocky Mountains from Vancouver to Calgary.

Straight after Canada I had a two week mini-taper and then found myself on the start line of Ironman Wales. A rough swim, a hilly bike and an even hillier run saw me dig into the world of mental toughness and my finishing position secured me an automatic qualification to the 2015 Ironman World Championship in Hawaii! Oh yeah, back to the big island we go :)

Fellow ‘athletes’ talk often about the ‘off-season’ at the end of the year. Well, I think I’ve taken this to a new level. I barely ran, cycled once outside on my road bike and didn’t swim for three months. It was bliss! Now I need to get back into it again and start a slow but steady build into this year. I’ve got a dodgy left ankle at the moment which isn’t helping but I’ll get over it. I seem to run my best when I don’t train anyway!

In 2014 I took part in a total of six races (a running club ‘mob match’, Spitfire 20 miler, Ironman France, the Wales Swim, Ironman Wales and a 10 milerace - which I took easy - in November) - yes, six races. I don’t race much. I did a few parkrun 5k’s but we all know they’re not races, right.

I ran 742 miles, swam about 133km and rode my bike for 275 hours. I don’t know how many miles I rode as many of my rides have been on the static trainer. These numbers are down on previous years but I had an enjoyable year.

I had no coaching, no structured training at all, no training plan, only a couple of massages, next to no stretching, gallons of beer and spirits, a ton of chocolate and still find myself going to Kona.

I must be doing something right!