Each year along with many other people we like to (or perhaps don’t really like to) look back at the previous years training and racing. I’ve done it on this site since 2007 so this is my eighth annual summary. Here we go…

The year began with a dodgy ankle which was causing me problems running any sort of distance. That was a negative. The positive was that I had the Ironman World Championship in Hawaii to look forward to later in the year. The negative was that I’d like to be fit for an Ironman and my ankle wasn’t helping.

I wasn’t able to run in the London Marathon in April due to injury and lack of training. I did however run my favourite race - the Bognor Prom 10k in May. I’d missed it in 2013 and 2014 so it was great to be back on the start line. I wasn’t quick but I loved it. My legs didn’t the following day.

In June I swam 2.4 miles in one of the fastest flowing rivers in the country. The river was flowing in a favourable direction as well. Now that’s my kind of swimming.

I proudly wore my Ranelagh Harriers running club vest in July for one of their races. It was great to see friends I’d not seen since moving to the seaside just over a year ago.

With an Ironman rapidly approaching and some fitness returning in the nick of time I entered the inaugural Bognor Triathlon in August. The weather was perfect and it was a right load of fun. I plan to do this race again in 2016.

A few days after the race I took one heck of a tumble on my bike which screwed my pre-Hawaii training up good and proper. I couldn’t run for a few weeks, barely swam and only managed a few short rides on my turbo trainer. Things weren’t ideal.

However, in late September we jetted to Hawaii for a three week holiday with a little Ironman thrown in towards the end for good measure. I did my slowest ever Ironman. But I loved it. I wrote a little blog about our holiday and the race :)

There’ll be no (full distance) Ironman races for at least a couple of years so I think I’d like to try and get some consistent training back in again. Not as much as in previous years but more than I’ve managed in 2015 for sure!

Looking at my run mileage for the year I seem to be on some sort of downward trend! Well - it’s time to sort this one out and start heading up in the direction of four figure mileage in 2016. I’d be happy if I managed that (around 20 miles per week) this year. 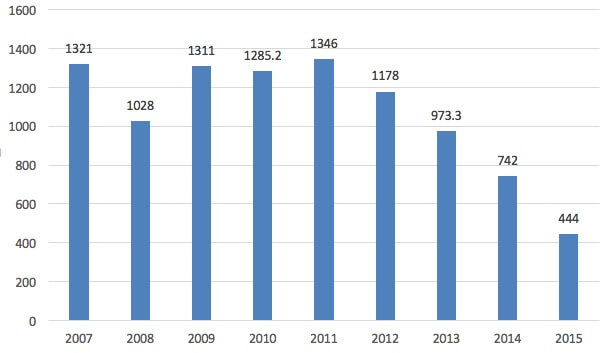 I’ve not much else to write about that isn’t written about elsewhere on this site. My only aim right now is to try and get under 40 minutes again at the Bognor 10k and also do one or two (or more) local triathlons. That’ll do for this year.

Oh, I’m going to windsurf as much as possible too as it would be rude not to take advantage of the sea when it’s so close to our front door.