In 2009 it was suggested that a social run around the Bushy parkrun 5k course a few weeks out from the London Marathon would be a great little motivator for those long runs and also to get to share a long run with people who are running different distances - so not just for the 20+ miler club! Not The London Marathon was born! You can read about the2009,2010,2011,2012,2013,2014and 2015events elsewhere on this blog.

This run is a great social gathering and perfect for those in training for spring marathons as it’s right in the middle of most big long run training schedules.

For myself I’m running a half marathon in early May and then a 10k race a couple of weeks later. I’ve been consistent in my running so far this year (which is a miracle for me!) and planned to do four ‘laps’ - which is just under12.5 miles (20km). 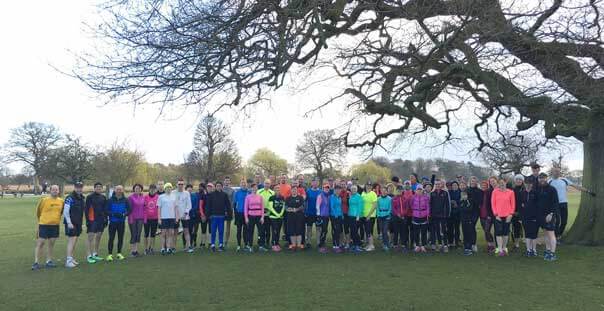 As with previous years there was a Facebook event setup and about 70 people had expressed an intention of attending. There were just under 70 people in the photo that I took just after 9am - and for a day where the weather was far from ideal I was really happy to see a good turnout - and plenty of friends who we’ve hardly seen since moving away almost two years ago. A few extra people joined in after the start which bumped the numbers up a little more.

For some reason I just didn’t feel strong on my run. I plodded around the four laps and caught up with friends so got what I wanted out of the run (some exercise and chat!). Best of all it didn’t rain at all during my run.

Unfortunately as the weather wasn’t being good to us the ‘usual’ picnic on the grass was short lived. A couple of gazebos were put up but after one made a loud ‘cracking’ noise and started to collapse they were quickly taken down.

The weather forecast was pretty terrible - with strong winds and heavy rain showers. Somehow the majority of us (who ran sensible distances) avoided a crazy hailstorm at about 11am. I was sat in a friends car having a ‘car picnic’ at that point barely able to see out of the window because of the rain.

Apart from the weather a great morning out.